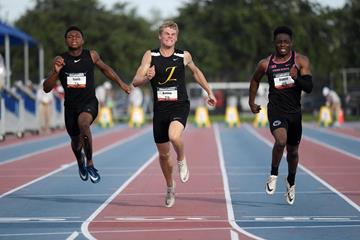 Matthew Boling in action at the US U20 Championships (Kirby Lee) © Copyright
24 JUN 2019 Report Miramar, USA

Sprint phenomenon Matthew Boling won two of the three events he contested in Miramar at the USA U20 Championships, which concluded on Sunday (23) after three days of action.

The 19-year-old nearly pulled off a trio of titles but ultimately had to settle for third place in the long jump with a best of 7.71m (1.9m/s), just three centimetres shy of Phillip Austin’s winning mark of 7.74m (2.9m/s). With just the top two athletes in each event selected for the Pan-Am Junior Championships team, it means Boling won’t contest the long jump in San Jose, Costa Rica, on 19-21 July.

Boling earned a silver medal as part of the US 4x400m squad at the IAAF World U20 Championships Tampere 2018, but he ran in just the heats of the event. After learning that he hadn’t been selected to run in the final, he wrote a note on his phone which said: "I will never take an opportunity for granted again.”

He found that note again on Friday, the opening day of the US U20 Championships, and it provided the perfect motivation.

“Ever since last year, my goal was to make it in open events,” Boling said. “I thought it was going to be in the 400m.”

This season, Boling shifted his focus from the longer sprint to the 100m and the 200m. He became an internet sensation in April after running a wind-assisted 9.98 (4.2m/s). Two weeks later at the Texas State Championships in May, Boling won the 6A 100m title in 10.13 to take 0.02 off the US high school record, breaking a mark that had stood since 1990.

But none of the notoriety could prepare Boling for shifting between the 100m and long jump on Saturday on a humid weekend where temperatures soared over 35C.

In a two-hour window, Boling won the 100m final after winning his heat in a wind-aided 10.13 (2.3m/s). That was followed by taking all six jumps for the first time in the long jump where he suffered his first loss. Boling had never had to take more than three jumps.

“I think it will be better at Pan-Ams when I don't have all those events in one day,” Boling said. “I was just tired.”

It was a more favourable schedule for Boling on the final session of the three-day meeting on Sunday. After a wind-assisted 20.30 in the heats, he won the 200m in a wind-legal 20.36.

"I just wanted to qualify for the team because I had a really long day yesterday,” Boling said “(After the 200m prelims), I knew that I could do something really good in the finals.”

Davis and Robinson impress over one lap

Kayla Davis and Justin Robinson also followed up their recent breakthroughs in the 400m.

Brandee Presley of Mississippi won the women's 100m in 11.19 and Lanae-Tava Thomas of Southern California, a member of the Trojans' NCAA champion and world-leading 4x100m relay, won the women's 200m in a windy 22.64.

The closest race of the meeting came in the 110m hurdles where Tai Brown of Kentucky edged reigning Pan-American U20 champion Eric Edwards Jr. of Oregon, 13.204 to 13.209 (both 13.21 officially). Brown and Edwards both equalled the championship record and moved into a tie for third on the US all-time U20 list.

Jamar Marshall, aged 17, placed third in 13.22, moving to sixth on the US U20 all-time list. It was the fastest high school time since 2009 and smashed the junior class record of 13.32 held by Edwards.

Marc Anthony Minichello added nearly five metres to his PB to get the better of world U20 silver medallist Tzuriel Pedigo in the men’s javelin.

Mayyi Mahama had six throws beyond 60 metres in the women's hammer, highlighted by a fourth-round effort of 65.66m that catapulted her to third on the US U20 all-time list.

Otito Ogbonnia won the men's shot put with 21.42m, putting him fourth on the US U20 all-time list.