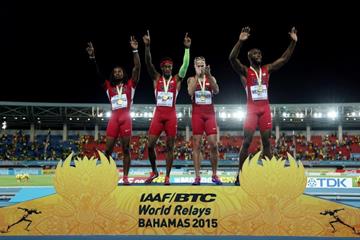 The golden baton is awarded to the team who accrues the most points, based on the simple scoring system of eight points for a first-place finish, down to one point for finishing eighth.

They may have had one or two mishaps, most notably in both 4x200m finals, but it didn’t affect the USA's overall standing as they amassed 63 points, three more than their winning tally from last year.

And just like 12 months ago, Jamaica finished runner-up to the USA with 46 points after winning the men’s 4x200m and women’s 4x100m on Sunday.

Poland’s three podium finishes – including silvers in both 4x800m relays – contributed significantly to their overall third-place finish, six places higher than they managed in 2014.

Australia also improved on their position from last year, taking fourth place in the race to the golden baton.

Germany, France, Kenya and Great Britain made up the rest of the top eight.