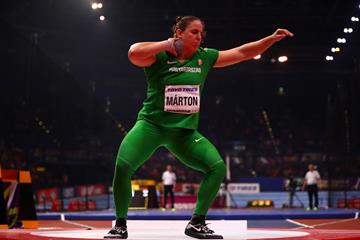 It was a hard-fought contest, though, and history was also made by the athlete in second place as Danniel Thomas-Dodd became the first Jamaican woman to win a global medal in a throwing event.

Thomas-Dodd opened with 18.92m to take an early lead. She improved to 18.95m in the second round but was then overtaken by world champion Gong Lijiao with the very next throw of the competition, the Chinese athlete sending her shot out to 18.98m.

Two-time European indoor champion Marton, who had started her series with 18.29m and 18.30m, then made her intentions known. She produced a world-leading 19.48m in round three to take the lead and bump China’s Gao Yang – who threw 18.77m in round two – out of a medal position.

Thomas-Dodd responded with 19.22m to consolidate her second-place position. Little happened in rounds four or five, but the competition ended with a trio of 19-metre throws.

Gong – who had resumed training just six weeks ago after suffering a knee injury this winter – rounded out her series with a season’s best of 19.08m and Thomas-Dodd ended with 19.07m.

But world silver medallist Marton – as she has done during five of her past seven medal-winning performances – saved her best throw for the final round and sent her sphere out to a world-leading national record of 19.62m.

“I have been dreaming about this achievement since the Olympics,” said Marton, who took bronze in Rio in 2016. “I had a lot of people cheering for me in the crowd. The atmosphere was amazing.”