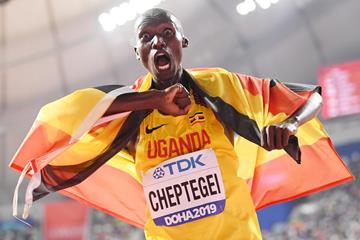 In a brutal race of attrition, Joshua Cheptegei of Uganda capped a glorious year by securing the world 10,000m title to add to the world cross-country crown he secured in March.

Cheptegei, who shared the pace with Kenyan duo Rhonex Kipruto and Rodgers Kwemoi for much of the race, was rewarded by out-slugging Ethiopia’s Yomif Kejelcha in a thrilling final lap to land the title in 26:48.37 – the second-fastest time in World Championships history.

Kejelcha, who earlier this year set a world indoor record for the mile and was running in only the second 10,000m race of his career, earned silver in 26:49.34.

But this was some performance from Cheptegei, who upgraded on the silver medal he won in the 2017 world final to became the second Ugandan gold medallist at the IAAF World Athletics Championships Doha 2019 after women’s 800m victor Halimah Nakaayi.

The race took on a familiar pattern from the early stages with the plucky Kipruto setting the pace from the front, helped admirably by his wingman Rodgers Kwemoi with occasional stints at the front from Cheptegei’s compatriot Abdallah Mande.

Halfway was passed in 13:33.20 with Kipruto at the front and a lead group of 11, which also contained the tall, willowy Kejelcha who was content to lurk towards the back of the group.

Shortly after 8000m, Hagos Gebrhiwet and Lopez Lomong of the USA drifted off the back of the group as the relentless pace continued and the lead group was reduced to just six athletes.

By the time of the bell, Canada’s world 5000m bronze medallist Mo Ahmed of Canada, Kwemoi and Andamlak Belihu of Ethiopia had drifted out of the medal picture with the podium battle confined to Cheptegei leading from Kejelcha and Kipruto.

Kipruto was the first to crack and as both Kejelcha and Cheptegei quickened the pace down the back straight they were forced to take evasive action and veer to the side of several lapped runners.

Around the final bend the pair ran side by side, Cheptegei on the inside and Kejelcha to his outside, the duo almost clashing elbows.

Leading into the home straight the Ethiopian took half a metre lead, only for Cheptegei to kick again. Slowly the 23-year-old opened a gap and gradually extended the advantage before the invisible elastic between the pair finally snapped and the Ugandan was on his way to gold.

While Kejelcha plugged on for silver and Kipruto took a brilliant bronze, there was some top quality performances behind.

Kwemoi, the 2016 world U20 champion, was rewarded with fourth in a personal best 26:55.34. Belihu finished fifth and the second Ethiopian in 26:56.71 and Ahmed set a Canadian record of 26:59.35 to place sixth to complete a memorable championships.

The biggest disappointment was two-time world 5000m medallist Hagos Gebrhiwet, who was replaced as world leader by Cheptegei tonight. The Ethiopian had to settle for a distant ninth in 27:11.37.