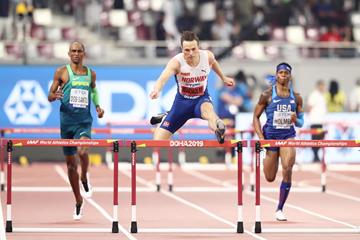 In one of the most eagerly anticipated races on the IAAF World Athletics Championships Doha 2019 schedule, it was Karsten Warholm who prevailed in the battle between three of the four fastest men in history.

In a mesmeric final, which provided a fitting climax to a glittering night of athletics inside a pumping Khalifa International Stadium, it was the Norwegian who delivered, claiming a decisive victory in 47.42 – 0.24 clear of Rai Benjamin.

The third member of the ‘terrific trio’ Abderrahman Samba – who had endured an injury-troubled build up - had the consolation of snatching bronze in 48.03 following a strong late surge.

Benjamin was less animated, preferring to lightly jab at his chest as he faced his senior maiden global championships experience from lane seven with Samba running blind in the outside lane nine.

As the gun fired all eyes were on the big three. It was hard with the naked eye to distinguish the leaders in the early stages but it was Benjamin who appeared to make the faster start quickly catching the stagger on Algeria’s Abdelmalik Lahoulou on his immediate outside.

Down the back stretch however, arms and legs pumping ten to the dozen, it was the Norwegian who slowly started to make gains on the American and by halfway he held a slight advantage.

Round the final bend Samba appeared to be fading from the medal picture with Yasmani Copello, the 2017 world silver medallist, and Kyron McMaster of the British Virgin Islands running from the tight inside lane two, in the hunt for bronze.

As the field entered the home straight Warholm held a clear metre-and-a-half advantage on Benjamin with McMaster emerging as the likely bronze medallist.

Approaching the final hurdle, Benjamin’s stride started to lengthen as he strained every sinew to time the tenth barrier.

Reaching desperately the 22-year-old American slightly stumbled on landing and lost a bit of momentum, Warholm, meanwhile, remained rock solid and Benjamin simply could not get within striking distance.

The Norwegian, who in the final 10m or so started to tilt his head back, lunged over the line a champion.

In the battle for bronze, Samba spurred on by the home support, dug deep and the joint third fastest man in history somehow summoned the energy to overhaul McMaster in the final few strides. The Qatari clocked 48.03 – 0.07 clear of the man from the British Virgin Islands.

In fifth, American TJ Holmes wiped a tenth of a second from his personal best to record 48.20 with Copello taking sixth in a season’s best 48.25. The Brazilian Alison Dos Santos trimmed 0.07 from his lifetime best to claim seventh in 48.28.

Two years ago Warholm provided one of the iconic images of the London World Championships with a look of utter disbelief when winning the title at the age of 21. This time around his celebration was a little more restrained opting to let out a roar of victory while sat on the ground.

“It is easy to say afterwards that this was going to happen but I wasn’t too sure, to be honest,” added Warholm, who joined fellow legends of the event Ed Moses, Felix Sanchez and Kerron Clement as back-to-back winners of this title.

“This was a very hard race. I had a pain in my chest. I thought I was going to die but here I am a world champion. This is only the beginning for all of us. Tomorrow I’ve got to get up and work again. Norway is only a small country, so to be showing up on the world stage is amazing.”

The silver medallist Rai Benjamin added: “It’s been hard for me but in the rounds I just sucked it up and in the end I got a silver medal. I wanted gold but I was just happy to be out there. We were all chasing the wold record and I chopped at three of four hurdles. It just wasn’t the moment.”

An elated Abderrahman Samba added of his bronze medal in his first 400m hurdles competition since May: “I am not happy. I’m over the moon. Two days ago I wasn’t sure whether to compete or not so to make the podium is amazing. It’s been a long hard season for me with lots of injuries.”