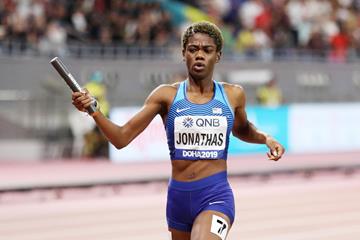 Living to their favourite’s billing, the US squad dominated the women's 4x400m, blitzing the field with a 3:18.92 world-leading performance.

Poland, anchored by European champion Justyna Swiety-Ersetic, took silver in 3:21.89, a national record for the quartet.

But the penultimate race of the IAAF World Athletics Championships Doha 2019 was all about the US quartet which included 2017 world champion Phyllis Francis, who improved her lifetime best to 49.61 in the 400m final, and 400m hurdling standouts Dalilah Muhammad, the world record-holder and freshly-minted world champion, and Sydney McLaughlin, the hurdles silver medallist, and rising star Wadeline Jonathas.

Francis got the ball rolling with a 50.6 opening lap, finishing her leg a couple steps ahead of Polish lead-off Iga Baumgart-Witan. But then McLaughlin, who at 20 is already the second fastest 400m hurdler of all time, took command with a sensational 48.7 split.

Then it was Muhammad's turn, who sizzled to a 49.43 lap to all but seal the win. Unpressed, Jonathas, who finished fourth in the 400m three days ago with a 49.60 breakthrough performance, brought it home with a 50.20 final lap. It was the sixth victory for the US in the past seven editions of the World Championships.

Jamaican anchor Shericka Jackson moved into second about 250 metres from the finish but Swiety-Ersetic was undaunted, fighting her way back and eventually passing Jackson with some 50 metres remaining.

Jamaica followed in 3:22.37 to take bronze, nearly a second ahead of Great Britain and Northern Ireland, who clocked 3:23.02.