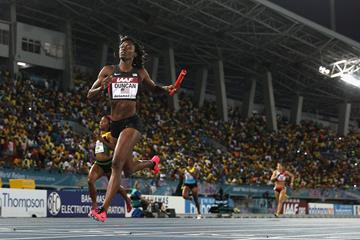 Kimberlyn Duncan of the United States crosses the finish line to win the women&#39;s 4x200m at the IAAF World Relays (Getty Images) © Copyright
26 MAY 2014 Report Nassau, The Bahamas

The US women captured the fifth and last women's relay final at the inaugural IAAF World Relays when they won the 4x200m in 1:29.45. It marked the fourth victory for the USA, who won all the women's relays except the 4x1500m.

Great Britain took second in a 1:29.61 Commonwealth record, and Jamaica's Shelly-Ann Fraser-Pryce-anchored quartet came in third in a 1:30.04 national record.

Shalonda Solomon led off the US team and Tawanna Meadows took the second leg. Switzerland's strong start tied them with Great Britain for the lead at the end of the first lap, but the tremendous four-turn staggers required to run two laps entirely in lanes made that distinction almost meaningless. Almost, because it showed the British were on a tear.

At the end of the third leg, Britain had a marginal lead thanks to third-leg runner Bianca Williams. With the stagger half unwound, USA’s Bianca Knight could see better how the other teams were doing, and she got the stick to Kimberlyn Duncan well before Fraser-Pryce had the chance to get underway.

By the time the Pocket Rocket reached the homestretch, not just Duncan but Great Britain's Asha Philip were well away.

The Bahamas continued the streak of national records (the USA, who own the world record, didn't set one) with a 1:31.31 in fourth, and Switzerland's 1:31.75 made a fourth record in fifth place. Nigeria made it five out of seven finishing teams, with a 1:33.71 national record in seventh. France was sixth in 1:32.23.