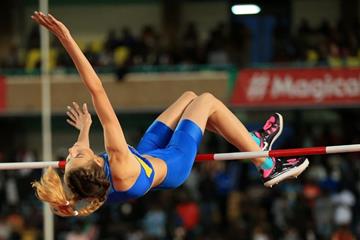 Despite being one of the youngest in the field, 15-year-old Ukrainian Yaroslava Mahuchikh dominated the girls’ high jump final to equal the championship record of 1.92m and winning by the largest margin in World U18 Championships history.

Whittling the field down from eight to five competitors, 1.79m proved to be the first decisive height. Mahuchikh held on to pole position with a first-time clearance at that height and was soon followed by Poland’s Martyna Lewandowska, Turkey’s Rumeysa Okdem and German duo Lavinija Jurgens and Bianca Stichling.

The remaining competitors could not quite manage 1.82m and exited the competition. With Jurgens having the best count-back record of the trio, the German secured the bronze medal.

With just two girls remaining, the bar moved up to 1.85m and Mahuchikh maintained her ascendency with a first-time clearance. After one miss, Lewandowska skipped to the next height, but the same happened again: Mahuchikh sailed clear at 1.87m.

Lewandowska used up her two remaining jumps at that height, her final try being her best effort, but she eventually had to settle for silver with a best of 1.82m.

Mahuchikh, meanwhile, asked for the bar to go up to 1.92m in a bid to equal the championship record set by compatriot Iryna Kovalenko, the only other Ukrainian athlete to win a world U18 title in a jumping event.

This time Mahuchikh needed two tries, but she got over it with little bother and then called it a day, grabbing a flag and setting off on a lap of honour.

One of the highlights of the early stages of the competition was the participation of Faith Kipsang. The Kenyan displayed a basic forward-leaping technique, more akin to hurdling, but after bringing down the bar on her first try at an opening height of 1.65m, she retired from the final.