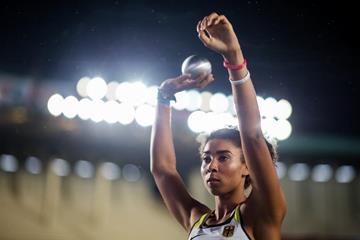 The girls' shot put final was billed as a battle between Germany and China, and there was no major surprise, with the two nations taking the top four places.

In what proved to be the closest girls’ shot put final in World U18 Championships history, the duel ended in something of a draw. Selina Dantzler made it gold for Germany with a best of 17.64m, but China took the other places on the podium through Yu Tianxiao and Sun Yue, relegating Jule Steuer to fourth place.

The competition started an hour late due to the violent downpour over the Moi International Sports Centre. The delay did not make things much better, as heavy rain continued throughout the competition. Even with the officials tirelessly sweeping water out of the circle after every attempt, the conditions were as far from optimal as could be imagined. Not surprisingly, most of the participants did not come close to her career best, but the final proved a real nail biter.

Dantzler showed her favourite status was justified with a first-round effort of 17.49m, an excellent result under the conditions. Her compatriot Steuer moved into second thanks to her opening put of 17.03m.

In the second round, the two Chinese athletes closed in on the Germans, with Sun reaching 17.00m and Yu 16.83m, but for a long while it looked like Dantzler and Steuer were still in control. None of the top four was able to improve in rounds three and four, and none of the rest of the field could get past the 16-metre mark.

One might have been justified in thinking the competition was decided at this point. And then the fireworks started.

Yu, fifth in the throwing order in the final rounds, produced a sensational personal best of 17.62m in round five to take the lead. Immediately following her, Sun, as if inspired by her teammate, sent the shot flying to 17.59m, also a personal best, to move into second.

Suddenly it was the Chinese who were in control. But the round was not yet over. Steuer was unable to improve, but Dantzler, with the attempt concluding round five, made a great effort and the ball landed at nearly the same distance as that reached by Yu and Sun.

After a few tense moments, the result flashed up on the board: 17.64m. The German thus moved back from third to the top of the leader board.

There was more great putting in the final round, with Sun reaching 17.35m and Dantzler 17.41m, but the final order remained unchanged. However, Meike Strydom of South Africa, only eighth after three attempts, set a career best of 16.40m in the sixth round to move into a clear fifth place.

The secret of Dantzler's success? "Coming into the final, my strategy was just to give it my all," the winner explained after the competition. "I'm proud to have done it for my country and my home town of Munich."

Both Chinese athletes expressed their mixed feelings about the result. "I'm satisfied with the result, although I could have done better. This being my first championship, I'm happy with the silver medal," Yu stated. “It was very tough, because Yu and I missed the gold narrowly," added Sun.