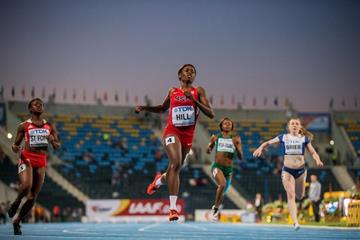 In the final event of the night, the 17-year-old provided a suitably thrilling climax to proceedings, edging local favourite Ewa Swoboda of Poland, who set a national U20 record of 11.12 in second. Trinidad and Tobago’s Khalifa St Fort took the bronze medal in 11.18.

Hill, the world U18 champion and the fastest US schoolgirl in history, made a quick turnaround after the US Olympic Trials to come to Bydgoszcz, but her efforts were rewarded in kind. “I was disappointed after US Trials, but my goal was to win and bring the title back home,” she said. “I wanted to beat the championship record too.”

Swoboda was equally elated in second. “I faced the best sprinters in the world,” she said. “I lost by just 0.05. That’s half the length of a finger. My career is only just getting started. Get ready for faster running.”

Watson and Krah make it triple gold for USA

Hill’s victory made it a night to remember for the US team as Samantha Watson claimed gold in the women's 800m and Marcus Krah did likewise in the men's 110m hurdles final.

Watson powered to the front around the final turn in the two-lap event, the world U18 champion seizing control ahead of Kenya’s Betty Chepkemoi Sigei and racing away to victory in 2:04.52. Her compatriot Aaliyah Miller arrived with a late charge to take second in 2:05.06, just in front of Ethiopia’s Tigist Ketema, who came home third in 2:05.13.

“All the training has paid off,” said Watson. “I just wanted to get to that finish line really badly. As I was coming into the home straight, I didn’t know where Aaliyah was, I was just hoping she was right behind me.”

Unlike Watson, Krah led every step of the way to take the 110m hurdles title, blasting from the blocks in explosive fashion and snapping his way over the 10 barriers to a virtually flawless performance. Unsurprisingly, his winning time of 13.25 was a personal best and his joy was bolstered at the finish as he looked across to see teammate Amere Lattin take silver, his 13.30 also a PB. Japan’s Takumu Furuya was a hair’s breadth behind in third, his 13.31 an Asian U20 record.

“I never thought I would actually get gold until I got here,” said Krah. “It feels great to finish one and two with my teammate.”

While the US may have won the overall war in the sprint events on Thursday night, close rivals Jamaica gained victory in one major battle.

They had never won the women’s 400m title at this championships, but Tiffany James ended that drought with a composed, courageous display of one-lap running.

“It was my goal since the start of the season,” said James. “I’ve had bad seasons in recent years so I said coming into this year I want to get that gold. I don’t want to say I surprised myself because I work hard and I expected that.”

Cuba continued their dominance in the horizontal jumps as Lazaro Martinez took the men’s triple jump title in 17.06m, the longest jump in the world by an U20 athlete this year. His closest challenger – who, to be frank, was not very close at all – was teammate Cristian Napoles, who took silver in 16.62m. France’s Melvin Raffin took third with a best of 16.37m.

“I wanted to beat the world U20 record [17.50m],” said Martinez. “It’s within my reach, but for now, Cuba won what everybody expected, gold and silver.”

The women's pole vault was won in a championship record of 4.55m by Angelica Moser of Switzerland. Moser topped 4.40m, 4.45m, and 4.50m with her first attempts, the latter to equal the championship record held jointly by 2012 winner Angelica Bengtsson and 2014 champion Alena Lutkovskaya.

She then followed up with first attempt success at 4.55m, also on her first try, to seal the victory, take sole possession of the competition record, and move up to No. six on the all-time U20 list. "I thought I could vault high here but there were three other girls with better season’s bests, so I wasn’t sure if I could win," said Moser. "I often set my best marks in major championships and I did it again here."

The most dramatic finish of the night came in the men’s 1500m as Kumari Taki demonstrated just how much it means to win a world title, the Kenyan diving forward over the line and slamming into the track as he took gold in 3:48.63.

Taki charged to the front with 200 metres to run and it was a lead he never relinquished, his legs carrying him to the line – just – to take gold ahead of Ethiopia’s Taresa Tolosa in 3:48.77. “I knew that the Ethiopian had a stronger kick than me so I had to dive at the line,” said Taki. “I made it.”

Kenya’s Anthony Kiptoo came home third in 3:49.00, with France’s Baptiste Mischler fading to fourth near the finish in 3:49.52.

In the women's discus, Kristina Rakocevic earned Montenegro's second gold medal in the history of the World U20 Championships, her third-round throw of 56.36m giving her gold by a wide margin ahead of Australia’s Kirsty Williams, who threw a PB of 53.91m to finish second. “It’s amazing,” said Rakocevic. “It is the best achievement of my life.”

Moldova’s Alexandra Emilianov took third in 53.08m, while Serena Brown set a Bahamian U20 record of 52.73m in fourth.

After four events of the women’s heptathlon, Cuba’s Adriana Rodriguez has a comfortable lead over Austria’s Sarah Lagger. Rodriguez had a best of 12.65m in the shot put this evening and clocked a lifetime best of 23.95 in the 200m to give herself an overnight tally of 3691 after four events.

Lagger shot up the standings during the evening session, her 13.09m shot put moving her up to third before a 24.93 200m moved her up to second and she will head to day two on 3510 points. Sweden’s Bianca Salming is third on 3441, just ahead of Canada’s Nina Schultz on 3437.

Belgium’s Hanne Maudens is currently in eighth position on 3369 points, but is expected to move up the standings and announce herself as a medal contender on day two.