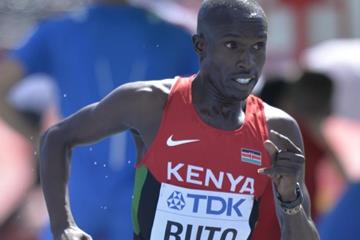 Vincent Kipyegon Ruto of Kenya in the opening round of the 3000m steeplechase at the IAAF World U20 Championships Bydgoszcz 2016 (Getty Images) © Copyright
21 JUL 2016 Report Bydgoszcz, Poland

As expected, Kenya’s quest for a 15th straight title in the men’s 3000m steeplechase went according to script as the third day of competition at the IAAF World U20 Championships Bydgoszcz 2016 got underway on Thursday (21).

Vincent Kipyegon and Amos Kirui, the athletes cast for a fourth successive Kenyan 1-2 finish at these championships – and an 11th overall – comfortably advanced to Sunday afternoon's final finishing first and second, respectively, in their respective heats.

Yemane Haileselassie of Eritrea, the year's second fastest coming in to Bydgoszcz at 8:22.52, and Mohamed Ismail Ibrahim of Djibouti, who arrived in Poland with sub-8:24 credentials, also cruised into the final.

Meanwhile, in the opening round of the 200m, heavy favourite Michael Norman of the US made his eagerly awaited world U20 debut by winning his heat by more than half a second in 20.74.

In a round that witnessed no major casualties, South Africans Clarence Munyai and Tlotliso Leotlela were the fastest, winning their respective heats in 20.40 and 20.63. Leotlela finished fourth in last night's 100m final, just 0.02 seconds behind bronze medallist Mario Burke of Barbados.

There were no surprises in the opening round of the men's 400m hurdles, with all the favourites, including defending champion Jaheel Hyde of Jamaica, advancing to tomorrow's semi-finals.

Hyde, who'll be representing Jamaica in Rio next month, was an easy winner in the fourth of five heats, clocking 50.81, the second fastest performance of the morning. The quickest was turned in by South African junior champion Kefilwe Mogawane, who won heat two in 50.53, a personal best for the 19-year-old.

Others moving on included Taylor McLaughlin, the older brother of Rio-bound world U18 champion Sydney McLaughlin; and Brazil's Mikael de Jesus and Yoshiro Watanabe of Japan, both sub-50 performers this season.

After two events in the heptathlon, Adriana Rodriguez of Cuba leads with 2001 points, 40 ahead of Swede Lovisa Ostervall.

Germany's Lisa Maihofer is third with 1910 and another Swede, Bianca Salming, fourth with 1908. But pre-event favourites Sarah Lagger of Austria and Hanne Maudens of Belgium are both on course for a medal position. Lagger started her campaign with 14.25 in the 100m hurdles and 1.77m in the high jump, while Maudens produced marks of 14.75 and 1.77m in those events.

Sophie Weissenberg of Germany led all qualifiers in the women's long jump with a 6.34m effort, just two centimetres ahead of Frenchwoman Hilary Kpatchata, two of the five jumpers to reach the 6.25m automatic qualifying distance to move on to tomorrow evening's final. A jump of 5.85m was enough to advance from an opening round that only eliminated three jumpers from the competition.

In the men's pole vault, a clearance of just 5.20m was enough to secure a spot in Saturday afternoon's final. World U20 leader Kurtis Marschall of Australia went highest, topping 5.30m on his first try after passing at 5.20m.

Along with Marschall, Muntadher Falih Abdulwahid of Iraq, Briton Adam Hague and Swede Armand Duplantis concluded their work day after taking just a pair of jumps to advance. Others moving on included Christopher Nilsen of the US and his teammate Deakin Volz, son of former US record holder and Olympic finalist Dave Volz; and 16-year-old Emmanouil Karalis of Greece, who topped a world U18 best of 5.55m in Ostrava in May.

Finn Krista Tervo's 64.63m national U20 record was the highlight in the women's hammer qualification, an opening round which also produced few surprises.

Among the favourites, Norwegian Beatrice Nedberger Llano fared best, reaching 63.60m, an automatic qualifier. World U20 leader Ayamey Medina fouled twice but managed to advance with 59.84m in a competition where 58.87m was enough to make the cut to Saturday's final. Viktoriya Holda of Ukraine, who brought 67.33m credentials to Poland, also struggled. Managing just 56.35m, she failed to advance.