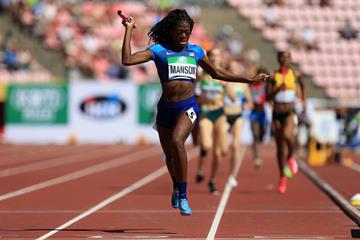 As expected, the United States cruised to its ninth straight women's U20 championship in the 4x400m relay, winning by more than two seconds over Australia in 3:28.74.

It was a fairly decisive, and --more to the point-- important victory for the USA, historically by far the winningest nation at these championships, whose few triumphs here in Tampere this week kept the Star Spangled Banner well off of regular rotation on the stadium's playlist.

Symone Mason handed Shae Anderson a two-step lead at the first exchange, with Australian second leg Cara Jardine following closely and Jamaica's Stacy-Ann Williams a distant third. The latter made up significant ground in the Australian, moving briefly into second before being retaken by Jardine as the leaders approached the third exchange.

Running third leg for USA, Julie Madubuike extended the quartet's lead, while behind her, the tussle for second was a tight one, with Jamaican Shiann Salmon, who raced to 400m hurdles silver two nights ago, moving into second as she entered the back straight. She ate up more ground on the US athlete, running almost even before handing off to 16-year-old anchor Colisha Taylor.

But there was no catching US anchor Taylor Manson, the 400m bronze medallist, who knocked off the last lap in just over 51 seconds to secure the victory. That didn't mean Taylor didn't try. Running hard for some 300 metres, she made up much of the gap, but ran out of steam as she headed into the home stretch. First she was run down by Australian anchor Carly Thomas, second to reach the line in 3:31.36, and nearly by Canada, but she held her ground long enough to secure bronze for Jamaica in 3:31.90.