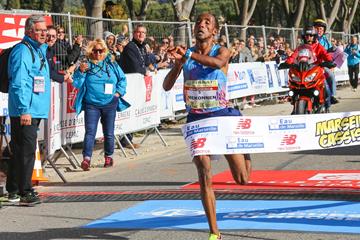 Yimer was one of the main pre-race favourites, although an unknown factor had remained: how would the 21-year-old Ethiopian manage his first effort over the 20km distance?

He responded in high style.

A group of ten runners including the favourites –Yimer, Evans Cheruiyot, Wilfried Kimeli Kimetei, the Moroccan pair Abdenasir Fahti and Hamza Sahili, Terefa Deleba, Felicien Muhitira as well as Tesfaye Ambesa-- passed five kilometres in 15:32. Nobody was anxious to take the lead, explaining the sluggish pace. Perhaps they dreaded the tough 327-metre climb up to the Col de la Gineste, thus continued to keep an eye on each other until they reached the summit, passing the 10-kilometre mark in 31:39.

Then, as the lead pack began the descent towards Cassis, Cheruiyot made a move 12 kilometres into the race, breaking up the field and opening a small gap on Yimer. The Ethiopian however rejoined the leader soon after, before injecting a big surge with six kilometres remaining.

He passed the 15-kilometre mark in 45:42, a few seconds ahead of Cheruiyot as Kimitei, who lowered his half marathon personal best to 1:00:12 six weeks ago, drifted back.

Cheruiyot, who clocked a 1:00:59 half marathon PB in May, tried to maintain contact but eventually had to leave the victory to the young Ethiopian.

Yimer produced an impressive display of strength in the waning stages, covering the final five-kilometre stretch in a swift 13:34 to break the tape in 59:16.

“I’m very happy with this win,” said an exhausted Yimer, who produced a notable year. Fourth at the IAAF World Cross Country Championships in March, Yimer was fifth at 10,000m at the World Championships in August and also produced a 27:54 10km personal best on the roads in September.

Yimer might compete in the Houilles 10km (near Paris) at this end of the year and will contest a half marathon at the beginning of the next year, before eyeing the track season.

Cheruiyot was second, 34 seconds behind the winner while Kimitei rounded up the podium in 1:00:09.

Abdellatif Meftah was the first Frenchman across the line, clocking 1:03:09 to finish 14th.

While Yimer pulled off the first success of his young career, it was the second in a row for Chelimo, following her strong win at the Cardiff Half Marathon in early October where she smashed her personal best to 1:05:52 to become the seventh fastest women in history.

Nevertheless it wasn’t an easy task today for the Kenyan. The Ethiopian pair of Muliye Dekebo and Dera Dida managed to stay with Chelimo during the climb up to the Col de la Gineste, passing the five and 10-kilometre marks in 16:21 and 35:07 respectively.

Chelimo then ratcheted up the pace as Dida and Dekebo began to falter. Chelimo covered the next five-kilometre section in 15:01 to hit the 15-kilometre checkpoint in 50:08 before extending her lead over the final stretch to win in 1:05:58, taking a massive 64 seconds from the 1:07:02 course record set last year by Kenyan Joyciline Jepkosgei. It’s noteworthy that the final three kilometres of the course were slightly modified and a little tougher than in previous editions.

This was likely Chelimo’s last appearance of the year. She’s slated to run the Houston Half Marathon on 14 January.

Dekebo held on to finish second in 1:06:41, more than a minute ahead of Dida.