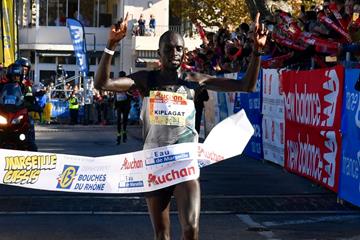 Henry Kiplagat and Joyciline Jepkosgei of Kenya triumphed at the 38th edition of the challenging Marseille Cassis, an IAAF Silver Label Road Race in southern France, on Sunday (30).

As soon as the gun sounded, a large group led by Rwanda’s Gervais Hakizimana detached itself from the rest of the field. Then, about three kilometres into the race, both Kiplagat and Edwin Rotich ramped up the pace and opened a gap over the rest of the pack.

They hit the five-kilometre mark in 15:15 and continued to push hard during the tough 327-metre climb up to the Col de la Gineste. They went through the halfway point in 31:43, two kilometres before starting the descent towards Cassis.

The gap between the leading duo and the chase pair of Remmy Ndiwa and Ezrah Sang continued to grow as Rotich and Kiplagat passed 15 kilometres in 46:03. They then took advantage of the downhill section to hurtle down the descent towards the waning stages.

With 500 metres to go, Kiplagat injected a big surge on a small hill to drop Rotich and pull off the victory in 59:28. Kiplagat covered the final five kilometres in a swift 13:25.

Kiplagat succeeded 2012 and 2015 winner Edwin Kipyego who was unable to make the trip to France to defend his title, thus thwarting his bid to become just the third runner to win this event three times.

Rotich, who couldn’t respond to the late race charge, crossed the line five second in arrears to settle for second.

“I was troubled by some foot problem in the end,” said a disappointed Rotich, who clocked a 59:32 half marathon lifetime best a week ago. “I would have preferred that Edwin Kipyego took part in the race to run faster.”

In the women’s contest, Jepkosgei produced a dominant performance to win in 1:07:00.

No one could sustain her pace and she never faded, even on the challenging Col de la Gineste, as she forged on to lower the previous course record, set by Kenya’s Mercy Kibarus in 2012, by 54 seconds.

It should be noted that last year’s winner, Peres Jepchirchir, ran faster, prevailing in Cassis in 1:06:01. But the course was shortened by about 400 metres due to road works near the start line in Marseille.

“I’m really satisfied to win,” said the 23-year-old, who finished 18th overall. “I still felt in a good form following my 31:08 10km personal best (in early September). I struggled a lot with the succession of uphill and downhill sections but I’m very happy.”

With her victory, Jepkosgei extended the Kenyan winning streak in the women’s race to seven editions.

The race began in cool and sunny conditions, but temperatures later reached nearly 25C in the finishing area at the port de Cassis. Approximately 15,000 runners entered the race.