On a day where Ethiopia dominated all four races, 20-year-old Merima Mohammed overcame leg problems and cold, wet conditions to run the second-fastest ever women’s race at the Chevron Houston Marathon on Sunday (13), while countryman Bazu Worku, 22, ran away with the men’s title.

World bronze medallist Feyisa Lilesa defended his title in the men’s Aramco Houston Half Marathon and Mamitu Daska, the 2011 Chevron Houston Marathon champion, won the women’s crown. Daska is the first-ever woman to win the marathon and the half marathon at Houston.

Mohammed ran the first half of the race with fellow Ethiopians Bizunesh Deba and Meskerem Assefa and that trio stayed together through 33km, when Mohammed made a strong move and broke away. She stretched her lead to 47 seconds over Deba by the 40km mark and crossed the line in 2:23:37, missing the course record by 23 seconds.

"I had a problem with my left leg," Mohammed told reporters through a translator while massaging her left calf. "It was hurting badly. It was a very painful situation."

Worku, who had been running in a pack of nine early in the race, came through the half-way mark in 65:25 with five others. But by 25km, he had opened up a 50-second lead over team-mate Solomon Molla.

Worku continued to stretch that lead with every mile and finished in 2:10:17, winning by more than two-and-a-half minutes. Teferi Balcha claimed runner-up honours in 2:12:50, while Molla held on for third in 2:14:37.

Course record-holder Lilesa ran side-by-side with Deriba Merga until the pair entered the home stretch, where Lilesa used his superior speed to win in 61:54. Merga, winner of the Houston Marathon in 2009, was second in 62:00, while Kenya’s Wilson Loyanai made a late surge to take third in 62:12.

Kilel finished as the runner-up for the second year in a row, finishing in 71:58 as her team-mate Hellen Jemutai was third in 72:34. 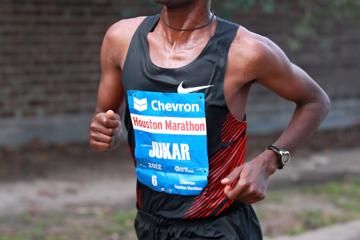