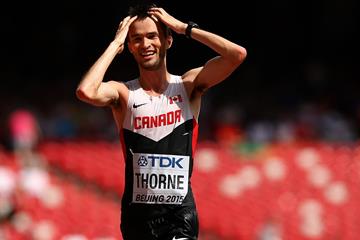 World bronze medallist Ben Thorne is a rising star in the 20km race walk. Here the Canadian offers his personal take on our first impressions questions.

I was aged about 15 and it was a 1500m race walk in Smithers, British Columbia to qualify for the British Columbia Summer Games. My dad had been a good runner and I too started to run. During my first year competing in track, when I saw the race walk I thought, I can win a blue ribbon in that. The next year I returned and entered the 1500m race walk. Only two of us entered that race, but I won in a time of about 10:40.

It was cross-country skiing. My parents were highly involved in the cross-country ski club in my hometown of Kitimat in British Columbia. I was on a pair of skis as soon as I could walk and I started competing from the age of five or six. I did okay as a cross-country skier. One year I finished in the top 15 at the Western Canadian Championships, but because I was skinny and cross-country skiing requires a lot of upper body strength, I didn’t improve in the way I wanted to. I probably competed in my last ever cross-country ski race aged about 15 before slowly transitioning to race walking.

My first race walking coach was a lady called Candyce Muzylowski. She was the only person in my hometown who knew anything about race walking because her daughter had done a little bit of race walking in her younger days.

First competition outside of Canada

That came at the 2011 Pan American Junior Championships in Miramar, Florida. I was the only race walker on the team and back then I didn’t really feel like I belonged. I remember I was disqualified just after halfway in the 10,000m race walk. It was definitely disappointing but looking back it was good to get that international exposure and the experience taught me I needed to work more on my technique.

I remember winning the British Columbia High School Champs in grade 11 and the very next day experiencing my first training session with Inaki Gomez and Evan Dunfee and Gerry Dragomir, my coach. The session was way more intense than what I’d experienced before and I picked up a hamstring issue, which stopped me from training for two months.

As my dad was a big track fan, I remember him telling me how awesome Donovan Bailey (the Canadian sprinter who won Olympic 100m gold in 1996) was. I also loved Beckie Scott, the 2002 Olympic cross-country skiing gold medallist. She is now an athlete representative for WADA, which is pretty cool.

I can’t remember my first piece of clothing, but I remember saving up to buy a trampoline when I was aged eight. I guess it wasn’t really my own money, but I remember carrying out chores for my parents and saving up $200 to buy the trampoline. I certainly got good use out of it.

I remember getting a really cool train set for Christmas as a four-year-old. It was a big steam engine with a couple of carriages and it ran automatically on a big track. I also remember a toy guitar. I couldn’t really play, but I pretended to.

I guess pouring myself a bowl of cereal doesn’t count as cooking. It was probably pasta. From early on, I knew how to boil water and put pasta in the pot.

I don’t usually cry too often during movies, but I guess it might have been when Mufasa dies in The Lion King. That was my favourite movie when I was younger.

I’ve never owned a car. I have a driver’s licence, but since I moved to Vancouver the transport is so good it seems a meaningless experience to buy a car. The only time I wish I had a car was to drive out to hiking trails.

It would have been a rabbit, although I later got a pet snake. I remember begging my mum and dad for two years for a pet snake before they caved in. I had a metre-long corn snake, which was totally harmless. I remember buying frozen mice from the pet store for the snake to eat. It was a really low-maintenance pet and I had it for five or six years. I remember taking great pride in decorating the cage. I used to fill the cage with top soil and the snake would burrow under the soil for the first few days.