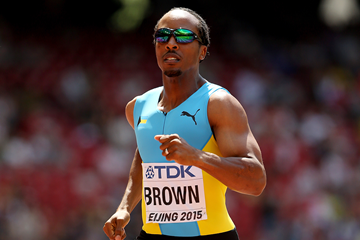 2012 Olympic 4x400m champion and 2010 world indoor gold medallist Chris Brown has been one of the world’s leading one-lap runners for more than 15 years. Here the Bahamian superstar they call 'The Fireman' shares with us one major obstacle he overcame in the early phase of his career.

“My biggest challenge came when I was a schoolboy trying to establish myself in track and field.

“At the time, I was in 12th grade living on my home island of Eleuthera. I was a promising young athlete with dreams of attending a US university on an athletics scholarship. I was very excited to find out a scout from a US college was keen to meet us. A coach was then supposed to take a group of six athletes to see the scout, but the coach ended up taking only four athletes, leaving myself and another athlete at home without telling us. We turned up on time at the meeting point only to be told there had been a change of schedule and that they had left two hours earlier.

“At that time, I was a total wreck. I was very sad, didn’t know where to turn. It was not a good feeling. Yet it was a blessing for me that driving back in the car with my mum and my mentor and coach at the time, Michael Coakley, they explained to me not to give up and that this was only the beginning. At the time, I was hearing it, but I didn’t understand it.

“My mum then made the sacrifice to send me back to school and I repeated my 12th grade again. From that point on I just wanted to make her proud every time I stepped on the track.

“In the end, it turned out to be the best decision I had made. I knew I had a lot of talent, I just needed the world to see who I was. I finished that year ranked number one in The Bahamas and this gave me the opportunity for many top US universities to see me compete.

“It worked out in my favour and I went on to compete for Southern University in New Orleans and later Norfolk State University in Virginia.

"For me, missing out on seeing that scout (for a US college) through no fault of my own made me a better person. It made me appreciate the little things in life and also taught me never to give up. It may have been a huge negative at the time, but I managed to turn it into a positive. That one bad experience changed my life forever.”