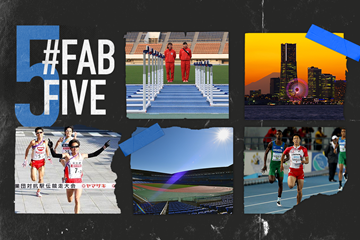 As we mark one week to go to the fourth edition of the IAAF World Relays, we look at a quintet of factors which will make next weekend’s edition in Yokohama (11-12 May) a sure fire winner.

To improve the quality of the meet and to generate greater interest, two new races have been introduced to the IAAF World Relays Yokohama 2019 programme.

The thrilling mixed 2x2x400m, designed for middle-distance specialists, requires both members of the team to run two 400m legs. Athletes then take turns to run their two legs in what is sure to test both the speed, endurance and most importantly pace judgement of all the competing athletes

For the first time, the meet will also feature the mixed shuttle hurdles with two men and two women on each team running 110m legs (note that the women will run an extra 10 metres at the end of their leg as they typically run over the 100m distance). The event will provide the climax to the first day’s action and is expected to prove a genuine hit.

As one of Japan’s most multicultural cities, Yokohama will lay out the welcome mat for all participants and visiting fans attending the event.

Located just south of Tokyo on the island of Honshu, the city developed rapidly after 1859 when it became the first port in Japan to be open for foreign trade. Today it is home to 3.7 million people and an average daily high of 22.4C in the month of May should make temperatures ideal.

Few countries in the world have embraced the concept of the relay quite like Japan. The first Ekiden relay – a long distance multi-leg race – took place in Japan 102 years ago and such races still hold huge appeal today with the most prestigious the annual two-day Hakone Relay.

On the track, Japan has a strong tradition, particularly in the men’s 4x100m. Using the underhand (or up-sweep) baton exchange has proved a wise move as the men’s sprint relay team have reached 11 of the past 13 global finals in the event; earning silver at the Rio 2016 Olympics and a bronze medal at the IAAF World Championships London 2017.

The cavernous International Yokohama Stadium plays host to the IAAF World Relays and it is a stadium with a genuine pedigree.

Opened in 1998 and boasting a huge capacity of 72,327, the stadium held the 2002 World Cup football final between Brazil and Germany. Later this year the Rugby World Cup will be hosted at the venue and it has also been a frequent home for the FIFA Club Football World Cup.

A sprinkling of success for the hosts always helps add to the buoyancy of an international meet and Japan are not without hope of picking up a couple of medals.

The men’s 4x100m (the event Japan claimed bronze at in the 2015 IAAF World Relays) remains their best hope. With four athletes – Ryota Yamagata, Yoshihide Kiryu, Aska Cambridge and Takuya Nagata – in the top 100 of the 2018 world 100m lists, and with the likes of Takuya Kawakami, Abdul Hakim Sani Brown and Shuhei Tada all ranked in the top 20 in the world this year for the 60m indoors, they boast an enviable strength in depth. Japan could also threaten the medal podium in the men’s 4x200m.