Few athletes get to enjoy the stand-out competitive performance of their career in the white-hot furnace of major championship competition, but Hestrie Els (formerly Cloete) had the good fortune to experience that moment in the defence of her world title in Paris.

Inside the cavernous Stade de France, the South African high jumper with the distinctive ‘windmill arm action’ soared to gold courtesy of a magnificent lifetime best leap of 2.06m – a mark which has only been bettered three times in the past 14 years since that glorious moment in the French capital.

“It was such an amazing feeling to be so high in the sky and not touch the bar,” she says of the 2.06m clearance. “It was the time of my life.”

Born in Germiston but raised in the small town of Coligny in South Africa’s North West Province, Els’ athletic talent was spotted at high school by her long-time coach Martin Marx aged just 13.

She started out as a heptathlete but started to enjoy real success specialising in the high jump. Aged just 18 she made her IAAF World Championships debut in 1997 in Athens, where she equalled her PB of 1.94m in qualification and placed 10th (1.90m) in the final.

“For me this was the start of a dream,” she says. “I worked hard while I was at school to be the best and this was the next step going forward.”

By the time of the 1999 IAAF World Championships in Seville, Els was no longer the inexperienced novice but an established world-class performer. In 1998 she secured the Commonwealth Games and African Championships double as well as placing second at the IAAF World Cup in Johannesburg by equalling her PB of 1.96m and the following year stepped up to the next tier.

At the 1999 Meeting de Paris she cleared the landmark 2.00m for the first time in her career before soaring clear at 2.04m in Monaco in her final pre-World Championships outing.

Among the favourites in Seville, Els, however, endured a nightmare, failing to qualify for the final with a modest best of 1.89m in qualifying.

“It was one of the most disappointing experiences of my entire career and it will haunt me for the rest of my life,” she says. “Never count your chickens before they hatch. In my head, I was in the final even before I set foot on the track. I was over confident and it cost me big time, but I learned never to take a place in the final for granted.”

The following year a mature, wiser athlete, Els had learned from her Seville disappointment to take silver at the 2000 Olympic Games in Sydney with a best of 2.01m.

Taking the championships step by step, she successfully negotiated qualification and then in the final boasted a perfect record up to and including 1.97m – which was to prove crucial. The South African – than aged just 22 – cleared 2.00m at the second time of asking along with the only other remaining competitor, Inga Babakova. However, boasting a superior record to the Ukrainian on countback proved vital.

After Els failed with all three attempts at 2.02m, Babakova had one last effort to deny the South African gold.

“I just could not look and turned away, standing with my back to the bar,” she recalls of that moment. “I waited by the crowd to let me know what happened. For a while (after the gold medal was confirmed) I was in awe. I went up to my coach, grabbed him around the neck and took the flag from him for my victory lap. A gold medal at any major championship is the cherry on top and it meant all the hard work, dedication and commitment to the sport finally paid off.”

Success continued in 2002 as the South African once more completed the Commonwealth and African double and ended the year on a high with victory at the IAAF World Cup in Madrid with a season’s best of 2.02m.

In 2003 she returned stronger in preparation for the defence of her world title in Paris.

She enjoyed a dream build up, clearing a PB of 2.05m in Berlin. But in a vintage year for women’s high jumping, the opposition in Paris was formidable, led by Sweden’s Kajsa Bergqvist, who had leapt 2.06m in Eberstadt that year, making Els far from complacent.

“In the back of my head, I still had the Seville ghost haunting me,” she explains. “I knew I was in the best shape of my life, I just needed to focus on qualification and putting it altogether to make it work.”

“This was the best day of my life,” says Els, who was six centimetres superior to Marina Kuptsova and Bergqvist, the silver and bronze medallists. “The weather was perfect, my run up was great. Everything just felt like it was set up for me. Looking back, I still get butterflies thinking about it.”

Els has just one slight regret from an otherwise unforgettable day in which three women cleared 2.00m in a World Championships final for the first time

The following year she landed her second successive Olympic silver medal in Athens and shortly afterwards retired from the sport aged 26.

To many, her premature retirement came as a surprise, but for Els it made perfect sense.

“I always said I would like to retire on a high note,” she says. “I had two Olympic silver medals and I was not sure if I would be able to better this silver in four years’ time (at the 2008 Beijing Olympics). I am still the Commonwealth and African record-holder and I am still ranked (joint) number five all-time. I was World Athlete of the Year in 2003 and a double world champion. Why not end my career on a high note?”

Now married to the famous South African singer Jurie Els, her life has undergone a big change post retirement. In early 2008 the couple moved to live in New Zealand for a better and safer life for their two children – Chrizette, 10, and Jason, 8. It has been a positive move for the former high jump star.

“Raising our kids in New Zealand also gets them out of the limelight in South Africa,” says Els, who for the past four years has worked as a pre-school teacher in Auckland. “Here they can grow up as normal kids as not many people know who their parents are. We are very grateful that we made the move years ago. New Zealand has been wonderful to us and our kids.”

Hestrie Cloete Els and her family in New Zealand

With no direct involvement in athletics today, her experience of the sport is limited to watching the major championships. She is a big admirer of Croatian Blanka Vlasic, the only other woman in history to have won back-to-back world titles in the high jump.

She has not ruled out playing some future role in the sport but for now her legacy remains those glorious moments in Edmonton and Paris.

“My success at the World Championships played a major role in my career,” she explains. “Being successful there also assured me I was on the right track to win a medal at the next Olympics.” 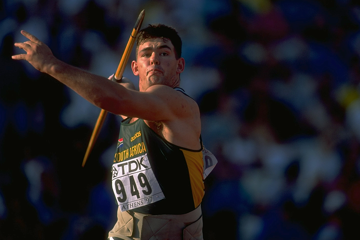