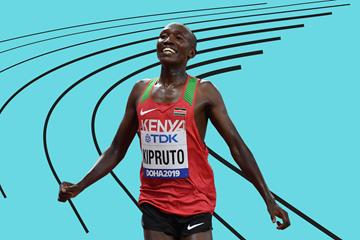 As the decade draws to a conclusion, we take a look at a quintet of athletes – all aged 21 and younger – who could be set to emerge as the star performers throughout the 2020s.

The Colombian made a seismic breakthrough at the World Athletics Championships Doha 2019 by smashing the South American record to earn 400m silver in 44.15.

Yet this season the man coached by Cuban Nelson Gutierrez has made a huge leap forward. Winning the Pan American title in August, he bettered his national record with 44.55 in his semi-final in Doha before obliterating that mark in the final to win Colombia’s first ever track medal at a World Championships.

Long since earmarked as a star of the future after winning the 2015 world U18 400m hurdles title and appearing for the US at the 2016 Rio Olympics aged just 17, McLaughlin looks a future world record-holder in her speciality event.

Born and raised in New Jersey, in 2018 she recorded the fastest times ever achieved by an U20 athlete for the 400m hurdles and indoor 400m. This season, under the coaching of 2004 Olympic 100m hurdles champion Joanna Hayes, McLaughlin elevated to a higher plane.

The winner of the Diamond League trophy in Zurich, she then ran a scintillating 52.23 to take world silver, just 0.07 behind Dalilah Muhammad, who lowered her own world record mark. McLaughlin climbed to second on the world all-time list with her dazzling performance in Doha.

Rhonex Kipruto in the 10,000m at at the IAAF World Championships Doha 2019 (Getty Images) © Copyright

Young talent out of East Africa is nothing new, but versatile distance-runner Rhonex Kipruto leads the way among the current generation.

Emerging on the international scene in 2018 when winning the world U20 10,000m title in Tampere by a margin of almost 20 seconds, he backed this up by setting a world-leading 26:46 for 10km on the road in Prague.

Aged just 18, the Ukrainian high jumper was one of the most exciting young talents to emerge from the World Championships in Doha.

An outstanding age-group performer, who claimed the 2017 world U18 title and the 2018 Youth Olympic crown, her performances in 2019 have been awe-inspiring.

The winner of the European U20 crown in Sweden, she leapt a PB of 2.00m in Stanford before producing the performance of her life in Doha, twice setting world U20 records to clear a best of 2.04m for silver behind Mariya Lasitskene.

The US-born Swede is already firmly established among the global pole vault elite and, aged just 20, he could be poised to be the star performer in his event for the next decade.

The 2015 world U18 champion grabbed the 2018 world U20 crown before bettering his own world U20 record later that year with a stupefying 6.05m clearance to land the European title and climb to equal third on the world all-time list.

His 2019 campaign has not been too shabby. He has twice cleared the landmark 6.00m height and at the World Championships in Doha, Duplantis earned silver with a best effort of 5.97m.