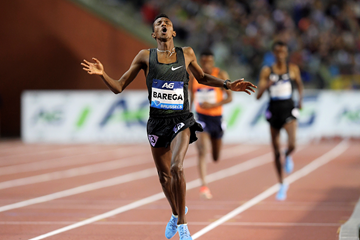 Selemon Barega’s story behind the picture

Ethiopian distance-running sensation Selemon Barega reflects on what winning this year’s IAAF Diamond League 5000m title in Brussels and climbing to fourth on the all-time list over the distance, courtesy of his 12:43.02 time, meant to him.

“Going back to my preparation for the 2018 season I definitely changed my approach to training. I decided to add interval/tempo workouts on top of the training programme given to me by my coaches and I believe this helped my overall shape.

“I started the outdoor season well, winning the two miles at the Eugene Diamond League, the 3000m in Ostrava and the 5000m in Stockholm.

“However, my confidence then suffered a jolt after I had to settle for fourth over 5000m at both the World U20 Championships and African Championships.

“Frankly speaking, I am always more comfortable when the race is run at a quicker tempo. At the World U20s I tried to make the race faster but the weather was hot. Unfortunately, just before the African Championships I was sick and I did not feel at my best in Asaba.

“I was very disappointed by my performances (in Tampere and Asaba), but my coaches refreshed my mind. They underlined the fact that results do not always go the way you want and told me to focus on the Diamond League final (in Brussels). I returned to training, worked on my individual sessions and focused on performing as well as I could for my final race of the season.

“In Brussels, because of the two bad results, I did not have high expectations and I went into the race scared of losing. But my coaches were confident I could make an impact. My plan was to ensure the pace was fast, although my fellow Ethiopian Yomif Kejelcha decided on the same approach! This surprised me because he usually prefers to let others set the pace, but by Yomif leading it made life easier for me.

“To be honest, even though I knew the first few laps were quick and I thought we would be set for a good time, I was unaware of how fast we were racing for much of the race.

“After hitting the bell, just behind Yomif I was 100 per cent sure I could defeat him. However, I was very wary of Hagos (Gebrhiwet) from behind because I knew he has a great turn of pace.

“On that last lap I held back because I was waiting for Hagos’s challenge and I only fully accelerated once passing Yomif.

“I was overwhelmed and very happy when I saw the time of 12:43.02. To win the Diamond League on its own was an amazing achievement but to run such a time was crazy!

“To run so quickly meant so much to me. It was the biggest victory of my running career, so far. I had targeted to run under my previous PB of 12:55 but running 12:43 has changed everything for me and my goal is now to one day break the world (5000m) record.”