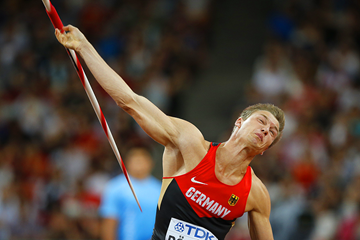 Javelin ace Thomas Rohler achieved a long-held dream when he struck Olympic gold in Rio last year. Here, for our 'My greatest challenge' series, the affable German talks in a little more detail about his road to achieving that goal.

For me, my greatest challenge was beating the role models I had looked up to from a young age. I always recall admiring double Olympic champion Andreas Thorkildsen because of the technical ease with which he seemed to throw so far. I was fascinated by his technique and his competitive ability. Another athlete I admired because of his fighting spirit was the Finn Tero Pitkamaki.

The challenge for me was to two-fold. Firstly, I had to deal and cope with the competitive challenge of facing these guys in competition. Meanwhile, in the long term the challenge was to be open-minded enough to put in place a plan to be better than them.

When I first competed against them in 2012, I felt like a small boy up against giants. However, I quickly realised the family of javelin throwers is not a closed family and It didn’t take long to get to know them and now we are all close friends.

In those days, my coach insisted I play close attention to them. So, I watched carefully how they warmed up, how they dealt with call rooms, competition and, of course, their technical advantages. It was super special to stand next to them and learn from them.

By 2013 Andreas Thorkildsen was starting to have his technical problems and I managed to beat him for the first time in Dessau (and again in the next competition in Oslo). It felt so special. Although, as a young guy at the time, I wondered if I should feel bad for beating him!

Counting on a stable training environment

Once I found out I had the talent to beat them, my mission was to one day become better than my role models. To achieve this, I then had to put a careful training plan together, find the right team around me and train in the right surroundings, all of which would allow me to become an elite athlete. One of the most important elements to this process has been my coach, Harro Schwuchow, whom I started to work with three-and-a-half years ago.

I have also benefited from being in stable surroundings in Jena where I have great facilities, great training partners and a fantastic support team.

I think I have managed to overcome this challenge and it has given me great confidence. It has also proved to me that rather than pursuing a career as a doctor or in some other field, it was the right decision to focus on sports and become an elite athlete.