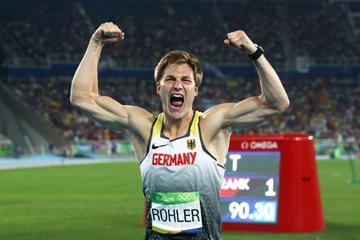 Thomas Rohler bounced back from the back problems which left him down in fifth place at the European Championships last month and turned continental disappointment into a global gold with his fifth-round effort of 90.30m.

Competing for the first time since Amsterdam a month ago, there had been some questions asked about his appetite for the big championships despite his success in IAAF Diamond League events and other one-day meeetings, including throwing a world-leading 91.28m in June.

Rohler quickly dispelled all those doubts when he reached 87.40m in the first round to slot into second place behind Kenya’s world champion Julius Yego, who had thrown 88.24m in the previous round.

However, Yego was to injure himself with his second throw and that sadly ended his involvement in the competition. Yego passed his third attempt, had a half-hearted fourth-round throw and then retired before leaving the infield in a wheelchair.

This left Rohler, and the rest of the field, to play catch up.

The German rattled off throws of 85.61m, 87.07m and 84.84m before finally surpassing Yego in the fifth round with a throw that was just 27 centimetres shy of the Olympic record set by Norway's Andreas Thorkildsen in 2008 and the second-best throw in Olympic history.

With the last throw of the competition, with Yego getting treatment, Rohler had a valedictory foul, knowing that the gold medal was his.

“I think after this year and after last year, we all knew that it's going to be a competition on a really high level," said Rohler.

Behind the leading pair, 2012 Olympic champion Keshorn Walcott had to settle for the bronze medal in the defence of his title, winning a battle with Germany’s Johannes Vetter for the last place on the podium.

Vetter opened with 85.32m for third place at the end of the first round but was overtaken in the second round when Walcott threw six centimetres farther. Neither man could improve after that point, so Walcott took his second Olympic medal, and at only 23 years of age.

Behind them, Ukraine’s Dmytro Kosynskyy improved his PB to 83.95m to finish fifth. Finland's 2014 European champion Antti Ruuskanen was also beyond 83 metres, finishing sixth with 83.05m.