Some 50 years ago amateur photographer Tony Duffy snapped this iconic image of Bob Beamon’s historic world record leap at the 1968 Summer Olympics in Mexico City. As the 50th anniversary of the photo draws near, Duffy talks about the background to one of athletics’ most defining images and how it changed the course of his life.

“The nineteen-sixties may have been an exciting time for many in England with the explosion of pop culture but for me as a London accountant working in a very conservative environment it was very different. I always craved more and took up photography as a hobby. I had a girlfriend at the time, who was an international hurdler. I went to a couple of athletics meetings, got an image published in a magazine and this gave me some encouragement.

“I was always a big sports fan, so I combined this with my passion for photography and decided to attend the 1968 Mexico City Olympics, where I also hope to grab some shots.

“Security was very different back then in the pre-Munich Olympic era and I casually managed to wander into the Athletes’ Village, complete with a borrowed tracksuit, and hung out poolside with the British team.

“It was here when I heard the reigning Olympic long jump champion Lynn Davies and the 1960 Olympic champion Ralph Boston in conversation. Lynn had a reputation for playing psychological games with his opponents, but Boston advised the Brit against such behaviour with the young, talented American jumper Bob Beamon commenting, “don’t rile him because he’s liable to jump out of the pit.” This was the first time I’d heard of Beamon, but I made a note of the name and thought he would be worth watching when the competition got underway.

“On the day of the men’s long jump final and carrying my Nikkormat camera, I was determined to get a good view of the action. With a half-full stadium and with a relaxed approach to security at the Games, I was determined to take my chance. I managed to talk my way past the student volunteers and I made it to the front-row seating. The long jump runway was outside of the track oval, which was ideal for me as this allowed me the chance to take shots of the jumpers head-on. I was only 50ft away and I was one of the few photographers down there as most were focused on the men’s 400m final.

“After the first three men fouled, Beamon was ready to take his first-round jump and I was able to shoot over the low railing. What happened next has become athletics folklore as Beamon, competing in the oxygen-thin air of Mexico City, launched out to a stunning world record of 8.90m – more than half a metre farther than the previous mark. I snapped one frame of Beamon’s jump and I recall seeing the whites of his eyes, but to be honest I was enjoying the action so much I had no idea what I had shot and carried the film around with me for a couple of days before taking the film to be developed at a one-hour photo kiosk at a nearby hotel.

“It was only after I held the negatives up to the light back in the room did I discover the Beamon pic. It was a sharp picture in which his mouth forms into an O and the scoreboard frames his figure.

“On my return to England I sent the photo and others I’d taken during my time in Mexico to Amateur Photographer magazine. In December of that year they published the Beamon image and only then did I realise the enormity of the pic. My phone started ringing and people really started talking about the image. Over time I realised I had taken something special and this gave me the confidence and belief to pursue a full-time career in photography. Three years later I gave up my accountancy job and the following year I founded Allsport photo agency alongside my photographer friend, John Starr. I was lucky enough to then establish one of the world’s top sport photo agencies (note, Allsport was sold to Getty Images in 1998 for $29.4m).

Bob Beamon next to his world record leap

“People ask me if it was the best photograph I took in my career and I would say no, because not a lot of work went into it. But without doubt it was the luckiest picture I took and probably the most important one.” 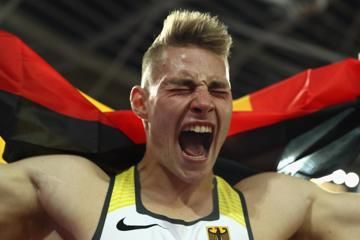 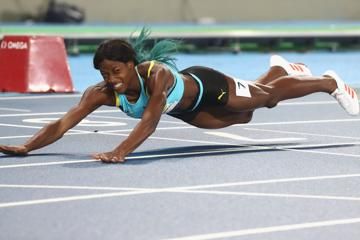 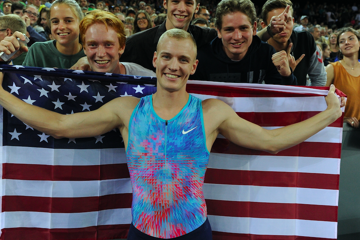 Sam Kendricks’ story behind the picture