Allyson Felix notched a pair of impressive victories to highlight the Inspiration Games, the Zurich Diamond League organisers' entertaining and innovative answer to the global coronavirus pandemic that brought together 30 athletes competing in seven venues across two continents on Thursday (9).

Felix, competing in Walnut, California, near Los Angeles, kicked off the meeting with a solid victory in the 150m and brought it to its conclusion with her anchor leg on the victorious squad in the closing 3x100m relay. All without another competitor on the track.

Felix’s immediate reaction to this first in her storied career?

"Very strange,” she said, with a wide smile. “It’s kind of like practice but not really, with no teammates.”

Running alone, she said, “It's hard to challenge yourself. But I love this sport so any chance to get out here and run. I'm all about that.”

Action on the tracks kicked off with the women's 150m, with Swiss star Mujinga Kambundji competing in Zurich, Olympic 400m champion Shaunae Miller-Uibo in Bradenton, Florida, 8000 kilometres and six time zones west, and Felix, another 4000 kilometres to her west.

With track configurations and the camera angles on the synchronized stream varying slightly, it was difficult to follow who was leading until moments before the three approached the finish line. Felix crossed hers first in 16.81, well clear of Miller-Uibo who stopped the clock in 17.15. Kambundji clocked 17.28.

Oddly enough, even as they raced from tracks on opposite coasts of the United States, the winds in their respective races were nearly identical. Felix battled a 2.6 m/s headwind and Miller-Uibo a 2.5.

Felix returned to the track to team with Candace Hill and Tianna Bartoletta to collect another dominant victory in the meet-capping 3x100m relay, the trio clocking 32.25 ahead of a Swiss team that clocked 32.50 in Zurich and a Dutch squad that clocked 32.94 in Papendal.

Conversely, the men's 100yd was the day’s only on-site face-off, with Jimmy Vicaut of France, Canadian Andre de Grasse and Olympic 110m hurdles champion Omar McLeod meeting on the Bradenton track where they faced a 3.4m/s headwind. For the first half, it was an evenly matched affair until de Grasse, running in the middle of the track, and Vicaut, running on the inside, broke away. De Grasse closed best to nab the narrow victory in 9.68, 0.04 ahead of Vicaut. McLeod was a distant third in 9.87.

In the 300m hurdles, Georganne Moline made the most of her late hour call up, powering her way to an impressive win in 39.08 on the Walnut track.

"I promised I'd never take another race or opportunity for granted," said Moline, who'd been sideline with a foot injury for the past 18 months. From the gun, it was clear she’d remain true to her word.

Georganne Moline in the Inspiration Games

Clearly ahead by the first hurdle, she padded her lead over each of the next three before cruising through to the finish.

"We just tried to treat it as a practice, but there was lots of anxiety going into the race," she admitted. Moline, who was fifth in the 400m hurdles at the 2012 Olympics, stepped in to replace world 400m hurdles champion and world record holder Dalilah Muhammad at the beginning of the week.

Running in Zurich’s Letzigrund Stadium, Lea Sprunger was second in 39.25. Czech Zuzana Hejnova, competing in cooler and wetter conditions in Papendal, Netherlands, was a distant third in 40.97.

But there was disappointment for Noah Lyles whose dominant performance in the 200m seemed too good to be true from the moment the clock stopped at a would-be world record of 18.90.

It was later learned that he was lined up in the wrong lane and ran just 185 metres. The mishap moved him from first to third, with the win - and the US$10,000 winner’s cheque - going to Christophe Lemaitre who clocked 20.65 at Letzigrund. Churandy Martina clocked 20.81 in Papendal to finish second.

Competing on his track in Lisbon, Pedro Pablo Pichardo prevailed in the triple jump with a 17.40m (+2.3) effort in the second round. World and Olympic champion Christian Taylor struggled in the early going but produced his best in the sixth round, reaching 17.27m (+4.2) in Bradenton to beat back Omar Craddock who leaped 17.04m in the second round in Walnut.

Pedro Pablo Pichardo at the Inspiration Games in Lisbon

Sam Kendricks took a solid victory in the pole vault with a first attempt clearance at 5.81m. Competing in Bradenton, the two-time world champion jumped well, topping 5.36m, 5.46m, 5.56m and 5.66m with his first attempts. Shifting winds caused some problems at the next height, 5.76m, which he topped on his third go.

Piotr Lisek, jumping in Karlstad, Sweden, was second with 5.66m.

Sandi Morris, who was also jumping in Bradenton, took the women's event with 4.66m. Swede Angelica Bengtsson, in Karlstad, was second at 4.46m. Like Valentin Lavillenie in the men's competition, Katerina Stefanidi, who was jumping in Walnut, no-heighted at 4.46m. 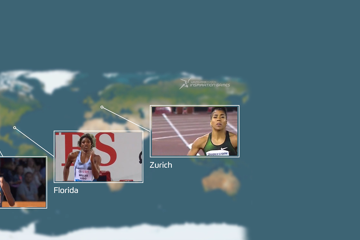 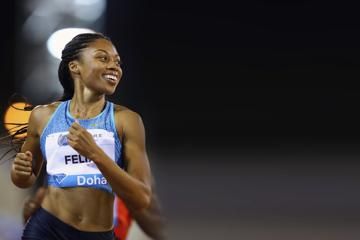 Global champions ready to get back on track f...