When the global coronavirus pandemic forced the cancellation of this year's Wanda Diamond League final, organisers of Zurich's Weltklasse meeting decided that Covid-19 wouldn't entirely wipe their competition from the European summer calendar. With travel restrictions likely to keep athletes from their event, Zurich decided to go to the athletes. Thus, the Inspiration Games set for 9 July, which will bring together 30 world-class athletes competing in eight disciplines across seven venues.

Those approaches will face a unique set of challenges - and will be met by a first-of-their-kind set of solutions.

Take the women's 150m, for example, one of the marquee events, that will feature Olympic legend Allyson Felix, Olympic 400m champion Shaunae Miller-Uibo and Swiss star Mujinga Kambundji squaring off in a cross-continental three-way battle. Felix will compete in Walnut, California, near Los Angeles; Miller-Uibo in Bradenton, Florida, near Tampa, about 4000km to the east; and Kambundji in Zurich's Letzigrund Stadium, another 8000km and six time zones away.

They'll be joined by a software system built around the start guns, which will be synchronised and operated centrally from Zurich. That means the race will start at the same global time in the three venues - a first in athletics. A slight lag time is necessary in order to create the accurate triple screen that will be broadcast to viewers. Broadcaster decided on a two-minute delay to ensure that everything comes out just right.

While officially dubbed as an exhibition event on the Wanda Diamond League tour, Hediger said that everything will be in place to ensure that all performances are ratifiable: from false start and photo finish equipment to wind gauges.

With athletes going head-to-head in different venues on separate continents, conditions, and the influence of conditions, will naturally vary. "We have to accept that," Hediger said.

While competitors in the track events will be running solo - time trials in effect - participants in the men's triple jump and men's and women's pole vault will be able to watch the competition unfold.

"We made sure that we will have some people along the (field event) runways giving some rhythmic clapping during the approach and cheering after the jumps,” Hediger said. “Just to have some live interaction for the athletes.

"But it will be a challenge for the athletes. Running solo will be unusual.”

The unusual, or non-tradition distances on the programme - a men's 100y dash, a women's 150m sprint and women's 300m hurdles - are along the lines of a season's opener, Hediger said, like a kick-off event so athletes won't need to face any unnecessary pressures.

On the broadcast side, host broadcaster SRG SSR will have 20 cameras covering the competition - a more conventional edition of the Weltklasses require 26 to 28 - and in total will require about 60 people to bring the broadcast to the world. On the management side, about 20 people are bringing the meeting together, Hediger said, on top of the 180 or so working on the competitions side, the usual backbone of any successful athletics meeting. 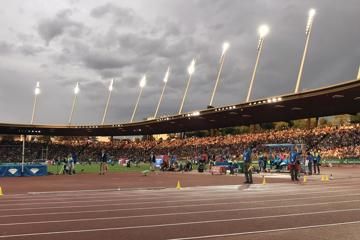 World-class athletics at Weltklasse – and acr... 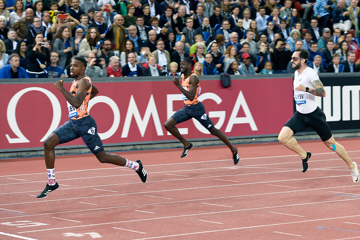 Lyles, Stefanidi and McLeod among the stars c...