The 800m has the honour of being the fastest individual event in which competitors share lanes. Being in the right place at the right time can be the difference between winning a medal and going home empty handed.

Taking all major finals in the men’s 800m from 2008-19 (three Olympics and six World Championships), we have charted the positions of all the medallists at 400m and 600m to analyse tactical trends from the period. This map that shows the aggregated placings of medallists at those key moments. 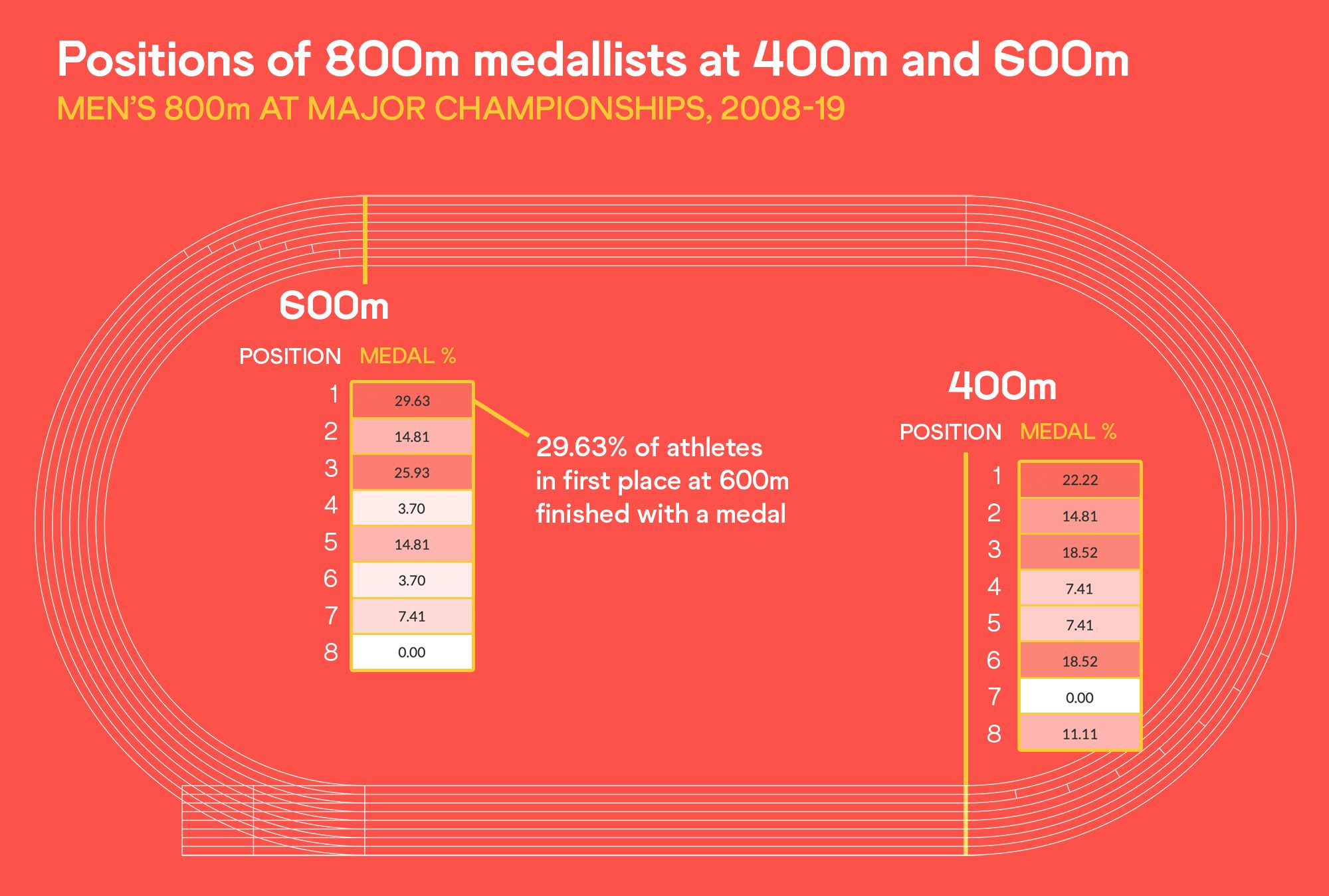 Frontrunners are often rewarded in the men’s event (in contrast to the women’s event where those placed second have the highest medal percentage). It becomes more nuanced from there; third-placed athletes at these points have been rewarded more often with a medal than those in second. The last-placed runner (although 2009 had 10 finalists) at the half-way point also had a better chance of winning a medal than those in fourth or fifth.

This is down to the small number of athletes in this period who built their race from behind, with only one instance of running into a medal from the back of the field. It is perhaps no surprise that Adam Kszczot’s stunning run to get silver at the 2017 World Championships in London was the first major final in the post-David Rudisha era, a man who dominated the way this was race was run.

Before 2011, seven out of the previous nine major championships were ‘sit-and-kick’ affairs, dominated by negative split running (a faster second lap) and favouring ‘kickers’ in the final stages of the race. Rudisha changed all that with his aggressive front-running strategy and set new speed demands on athletes in the discipline.

Of the past seven major championships, six have seen positive racing strategies (a faster first lap). This has made it difficult for athletes to work their way into medal positions from the back, which remains a more common tactic in the women’s event.*

Running ‘on the rail’, tight inside of lane one, has the added advantage of completing the actual distance of the event. It is often the luxury of a front runner. In this analysis, the more common position of medallists was tight on the inside at 400m (59%) and 600m (55%). However, it has been expertly executed to move up the field.

Again Kszczot, this time at the 2015 World Championships in Beijing, ran aggressively on the rail and was rewarded, indeed not dissimilar to his compatriot Patryk Dobek in his semi-final in Tokyo.

The shortest route is the most congested route and comes with its risks, which was seen in the other semifinal when there was a collision between Isaiah Jewett and Nijel Amos (who, after protest, will be an additional ninth runner in Wednesday’s final).

The post-Rudisha era continues and there will be a new Olympic champion this year. From this sample, it can be seen that Clayton Murphy and Amel Tuka are comfortable at working their way up through the field, but will anyone be brave enough to take it out from the start?

In recent history, the medals have favoured the front runner.

BACK
Pages related to this articleDisciplines
800 Metres