There is one event on the athletics programme in Tokyo that has no previous Olympic medallists, no Olympic records and, in fact, no Olympic history at all.

The mixed 4x400m relay will be making its Olympic debut in Tokyo, a discipline featuring teams of two men and two women competing against each other in any order they choose.

Fans will get an early taste of the new event as the first round takes place on day one of the athletics competition on 30 July, with the final set for the next evening.

First tried out at the senior level at the 2017 World Relays in Nassau, the mixed relay featured at the World Championships for the first time in Doha in 2019 and proved to be a big hit with its unique and unpredictable format.

The US team of Wil London, Allyson Felix, Courtney Okolo and Michael Cherry won gold in a world record time of 3:09.34. That came just a day after a US quartet made of four different athletes – Tyrell Richard, Jessica Beard, Jasmine Blocker and Obi Igbokwe – set a world mark of 3:12.42 in the heats.

The USA shapes up as the favourites in Tokyo, with a pool of top 400m runners that includes three of the winning Doha team.

The US men’s 400m qualifiers for the Games are Michael Norman, Cherry and Randolph Ross. Bryce Deadmon is also part of the mixed relay pool, with London as an alternate.

The top three US women are Quanera Hayes, Felix and Wadeline Jonathas. Taylor Manson was also chosen for the mixed relay pool, with Shae Anderson as alternate.

Strategy and tactics can come into play in the mixed relay where, on average, the male 400m runners are six seconds faster than their female counterparts.

While teams can select any order, most have chosen to go with a male lead-off runner, followed by two women over the following two laps, and a man running the anchor leg. 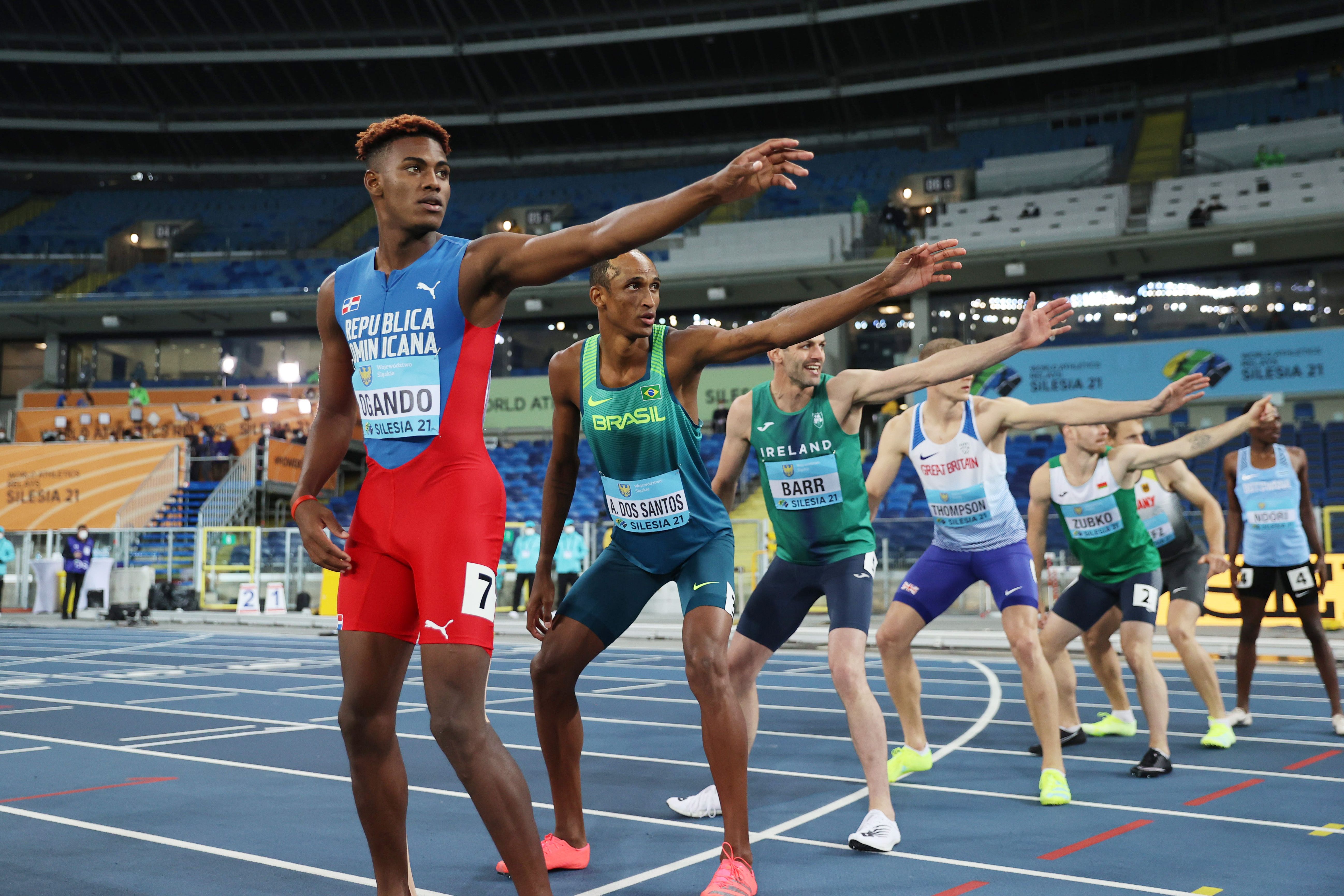 In Doha, Poland bucked the trend and went with a man-man-woman-woman lineup. The Polish men stormed into a big lead but the gamble didn’t pay off in the end.

Poland's Justyna Swiety-Ersetic started the final leg with a 30-metre advantage, and the crowd roared as she set off with seven men in pursuit. But she was chased down by Cherry and several other men in the final straight and finished fifth.

With the victory, Felix surpassed Usain Bolt’s record for career world titles with her 12th gold.

Jamaica finished second in Doha with Nathon Allen, Janieve Russell, Roneisha McGregor and Javon Francis setting a national record of 3:12.73. Just 0.01 seconds back in third place was the team from Bahrain, clocking an Asian record of 3:12.74.

The mixed event was most recently contested at the World Relays in May in Selesia, Poland.

With the US and others skipping the event, Italy claimed victory in 3:17.54 with a team of Edoardo Scotti, Giancarla Trevisan, Alice Mangione and David Re. Brazil’s squad, anchored by 400m hurdler Alison Dos Santos, was second in 3:17.54. Third went to the Dominican Republic team in 3:17.58.

The world-leading time this year was set by the German quartet of Marvin Schlegel, Manuel Sanders, Ruth Sophia Spelmeyer-Preub and Corinna Schwab, who clocked 3:13.57 in June. Teams from Ukraine, The Bahamas, Nigeria, Turkey and Czech Republic have also recorded sub-3:14 times in 2021.

The mixed event has opened the door to more countries which otherwise might not have four world-class 400m runners of the same gender for the traditional 4x400m.

Fans will have to wait to see which runners will be chosen to run and in what order.

The mixed relay will be fresh and unpredictable. What’s certain is that the event will produce new – and first ever – Olympic champions.

To call the United States the dominant Olympic force in the women’s 4x400m would be an understatement.

The sprint powerhouse practically own the event, having won gold at six straight Olympics over 25 years dating back to the 1996 Atlanta Games – with Allyson Felix part of the winning teams at the past three Games.

The USA will come in as a strong favourite for yet more gold in Tokyo, where the heats will be held on 5 August and the final on 7 August.

As usual, their stiffest competition should come from the Jamaicans, who won silver behind the US at the past three Olympics.

The US victory in 3:19.06 at the 2016 Rio Games earned Felix her sixth career Olympic gold and ninth overall medal. Her three Olympic relay golds ties her with Sanya Richards-Ross for the most in the event.

Felix, who will be competing in her fifth Olympics and first as a mother, finished second in the 400m at the US Trials and is part of the relay pool for both the women's and mixed 4x400m.

If she earns one medal in Tokyo, Felix will become the most decorated woman in Olympic track and field history and will also tie Carl Lewis for most medals by a US track and field athlete. The top four finishers at the US Trials clinched automatic berths in the relay pool. Team USA has designated other athletes as well, and additional runners already on the team could also be selected for the relays.

The pool of US talent for the women’s 4x400m relay is staggering. In addition to Felix, consider the potential candidates:

- Sydney McLaughlin, who clocked a world record of 51.90 in winning the 400m hurdles at the US Trials. She won gold as part of the winning 4x400m team at the 2019 World Championships in Doha.

- Dalilah Muhammad, the world and Olympic champion in the 400m hurdles who finished second at the Trials. She also won gold with the 4x400m team in Doha.

- Wadeline Jonathas, third in the 400m at the US Trials. She ran the anchor leg in the relay final in Doha.

The Jamaicans will be seeking to knock the USA off the top of the podium at the Olympics for the first time in quarter of a century.

The Jamaicans can select from a pool that includes Stephenie-Ann McPherson and Candice McLeod, who both posted personal best and sub-50-second times in finishing 1-2 in the 400 at their national trials in 49.61 and 49.91, respectively.

Also impressing at the trials were Roneisha McGregor, who ran 50.02, and Stacey Ann Williams, who clocked 50.14. Tovea Jenkins and Junelle Bromfield are also in the relay pool.

Poland and Great Britain should also be in the mix for medals.

With a team comprising three of the year's four fastest one-lap specialists, the USA arrives in the Japanese capital as an overwhelming favourite to capture an 18th Olympic title in the men's 4x400m.

World leader Randolph Ross, who clocked 43.85 to win the NCAA 400m title in Eugene on 11 June and returned to the same Hayward Field track nine days later to punch his ticket to Tokyo with a third place finish at the US Olympic Trials, heads a mostly young but largely experienced squad that includes trials winner Michael Norman and runner-up Michael Cherry, who have clocked 44.07 and 44.35, respectively, this season.

Like Ross, Norman too has sub-44 credentials, with a 43.45 lifetime best from 2019. Their pool includes Trevor Stewart, who has a 44.25 best from 2019 and Vernon Norwood, who will be looking to add an Olympic title to relay gold from the 2015 World Championships and 2016 World Indoor Championships.

While they enter most major championships as the team to beat, the USA haven’t been invincible. The Bahamas pulled off an upset victory at the 2012 Olympic Games in London and Trinidad & Tobago bagged surprise gold at the same stadium at the World Championships five years later.

The Bahamas haven’t qualified for Tokyo, but Trinidad & Tobago will be there vying for a third Olympic medal in the event after bronze finishes in 1964 and 2012. They'll be fielding the quartet of Deon Lendore, Jereem Richards, Asa Guevara and Machel Cedenio – the same squad that clocked 3:00.81 to win the World Athletics Relays title in 2019. Individually, they're not nearly as quick as the US squad this year – Lendore and alternate Dwight St Hillaire are the only men who've broken 45 seconds in 2021 – so their gold medal ambitions will again face an uphill struggle. 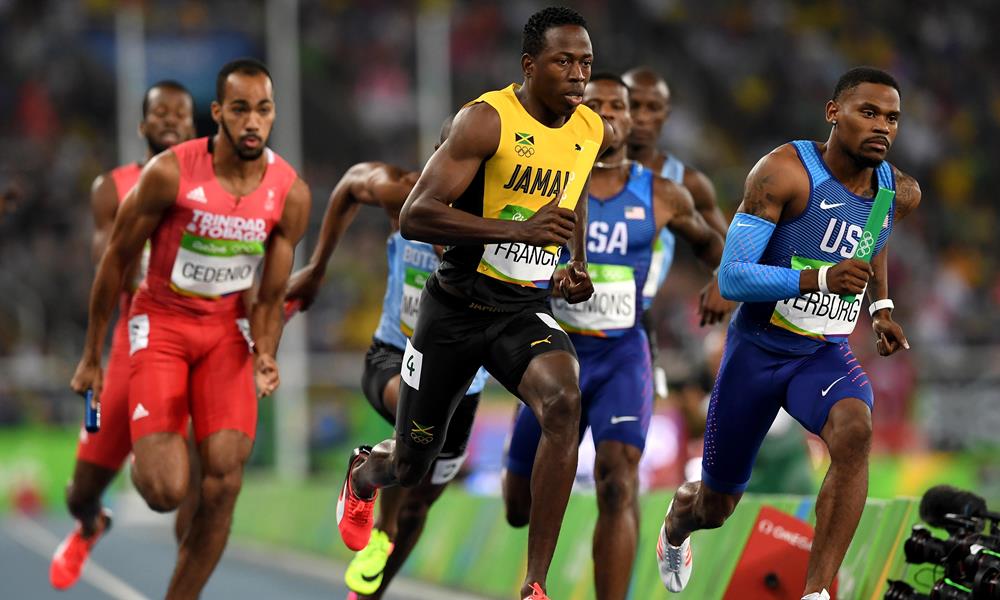 Neither the USA nor Trinidad & Tobago competed at the World Athletics Relays in Silesia in May, where the Netherlands took full advantage to win in 3:03.45, ahead of Japan (3:04.45) and Botswana (3:04.77). The chilly conditions in the Polish city notwithstanding, they'll have to run significantly faster to be in the medal hunt in Tokyo. Veteran Isaac Makwala (44.47) has been fast this year, boding well for Botswana, while Japan will be hoping to pull a home team advantage from the cavernous and empty Olympic Stadium.

Jamaica, the silver medallists in 2016, also boasts a rich heritage in the one-lap event and this year, headed by 2019 sub-45 men Demish Gaye and Nathon Allen, returns to the Olympic arena with strong medal prospects.

Belgium, the fourth-place finishers in 2016 and one of Europe’s perennial powers in the event, could also be a factor. 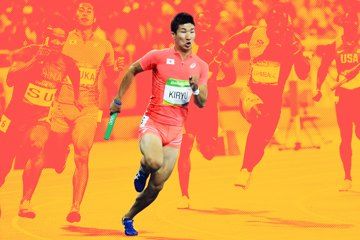 Yoshihide Kiryu: why I run relays...