Shelly-Ann Fraser-Pryce’s 10.78 clocking over 100m was one of six meeting records set at the Galà dei Castelli, a World Athletics Continental Tour Silver meeting, in Bellinzona on Tuesday (14).

The world 100m champion smashed the stadium record held by another Jamaican legend, Merlene Ottey, who clocked 10.95 in 1996. Fraser Pryce, who clocked a lifetime best of 10.60 last month in Lausanne, once again ran well on Swiss soil, producing her 13th consecutive sub-11-second clocking.

“Bellinzona is very special to me,” said the multiple world and Olympic gold medallist. “I am happy to be back here. I came to this meeting in 2018 with my son Zyon. I really wanted the meeting record held by Merlene Ottey, so I am excited about that. The weather was perfect. I set most of my best performances in Switzerland.”

Kambundj returned to the track for the 200m and scored one of two Swiss wins of the evening in 22.36, ending the meeting on a high note.

“I wanted to break the Swiss record (22.26),” said Kambundji. “I was not able to achieve it but I am very happy. I am very proud with my season, especially with the Olympic final in the 100m and the Diamond League win in the 200m in Eugene.”

Olympic bronze medallist Femke Bol crowned her successful season with a win in the women’s 400m hurdles in a meeting record of 54.02. European champion Lea Sprunger finished second in 54.53 in what was the final race of her career.

“It was really my last race,” said Sprunger. “I wanted to end my career on a high note. I ran my second-best time of the year. I am definitely happy with what I achieved this evening. I have a special relationship with this meeting and Canton Ticino. I train with my close friend Del Ponte and it will be strange that I will no longer train with Ajla and Femke Bol, but I will still remain in the world of athletics.”

Sweden’s Carl Bengstrom won the 400m hurdles B race in 48.53, improving the stadium record that had stood to Fabrizio Mori since 1997. But just minutes later, Olympic bronze medallist Alison Dos Santos won the A race in another meeting record with 48.15, holding off Estonia’s Olympic finalist Rasmus Magi (48.53).

Elsewhere, Olympic finalist Charles Grethen from Luxemburg came through in the final straight to win the men’s 1500m in a meeting record of 3:35.48. Slovenian record-holder Tina Sutej cleared 4.70m to win the women’s pole vault. She had a clean sheet at 4.35m and 4.50m before vaulting 4.60 on her second attempt and 4.70m at the third time of asking. 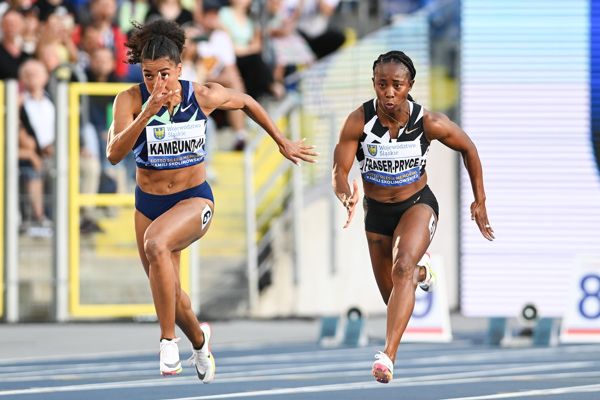