As the fastest woman on paper in the field, the 26-year-old Mengistu lived up to expectations. She outraced compatriot Melkam Gizaw to win in 2:25:56 and extended Ethiopian women’s winning steak in the Chinese capital to three years.

It is Mengistu’s first title over the classic distance in 17 months after her big breakthrough last year when she smashed her personal best by nearly six minutes to win the 2015 Paris Marathon in 2:23:26.

The winning mark is her second best career time and also the best result in 11 years at Beijing Marathon after the four straight victories from 2002 to 2005 by Chinese runner Sun Yingjie, who set the course record of 2:19:39 in 2003.

Running under cloudy conditions, Mengistu led the first 13 kilometres of the race together with Gizaw, who registered a PB of 2:24:28 to finish second at the 2015 Seoul International Marathon in March, and Hamila Hussen, who ran 2:32:51 when finishing eighth in Prague last May.

Before the 14-kilometre mark, the 23-year-old Hussen began to slow, leaving the race as a duel between Mengistu and Gizaw. The duo led together for another 26 kilometres before Mengistu pulled away to take control at 40 kilometres.

The in-form Mengistu padded the advantage in the last two kilometres, hitting the tape in style with a margin of 14 seconds.

Gizaw, who turned 26 on Saturday, failed to celebrate her birthday with a victory as she finished second in 2:26:10, which is the third fastest time ever achieved by the winner of last year’s Ljubljana Marathon.

Jo Un-Ok of the Democratic People’s Republic of Korea, who shaved more than five minutes off her PB to finished third at the 2016 Pyongyang Marathon in 2:29:57, settled as a remote third in 2:33:38.

The men’s race was also decided after the 40km mark, but the winning time was relatively slow compared to the women’s race. The 24-year-old Ayenew stunned a field that included eight sub-2:10 runners to win in 2:11:09, which is the slowest winning time of the event since countryman Siraj Gena’s winning mark of 2:15:45 in 2010.

It was the first marathon victory for Ayenew, who started to run in this distance in 2012. He has remained consistent this season, running under 2:12 in both of his two previous races in 2016 including a third place finish at the Wuhan Marathon in 2:11:17.

Ayenew’s winning time is 64 seconds shy of his PB set in 2013 when he finished as the runner-up at the Hannover Marathon and nearly four minutes slower than the course record of 2:07:16 registered by Ethiopia’s world bronze medalist Tadese Tola in 2013.

A leading group of ten paced the race through five kilometres in 15:47, 10 kilometres in 31:51 and 15 kilometres in 46:46. Following the 16-kilometre mark the lead pack began to shrink with eight men left at 20 and four, all from Ethiopia, at 25 kilometres.

After a series of speed changes, Andualem Belay, who has a PB of 2:09:59, dropped back at 33 kilometres, and Mesfin Teshome, who only started to run the marathon in 2016 and has a PB of 2:09:24, fell behind five kilometres later.

Ayenew and 2014 Hong Kong Marathon winner Feyera Gemeda remained shoulder-to-shoulder for two more kilometres before Ayenew sped out to push for the victory.

A total of 30,000 runners competed in the Beijing Marathon. The organisers changed the route of the race this year with the start remaining in the landmark Tian’anmen Square and the finish outside the “Bird’s Best” stadium, host to the 2008 Olympic Games and 2015 IAAF World Championships, respectively.

BACK
Pages related to this articleAthletes
Meseret Mengistu 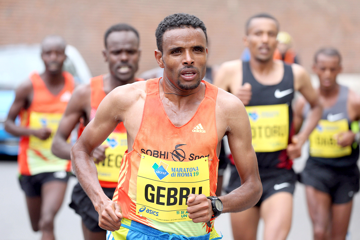 Ethiopian double victory despite the smog at ... 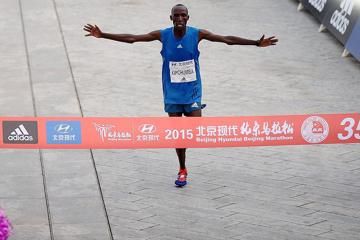