Defending champions Abel Kirui and Florence Kiplagat will be hoping for a sweet sense of deja vu at the 40th anniversary of the Bank of America Chicago Marathon on Sunday (8), an IAAF Gold Label Road Race.

To earn back-to-back titles, however, the 2016 champions will have to overcome rivals who have covered the distance far quicker, with world record holder Dennis Kimetto headlining the men’s field and Tirunesh Dibaba, one of only three women to have broken 2:18, the star attraction on the women’s side.

The race will mark the fourth stop on Series XI of the Abbott World Marathon Majors, which began in London earlier this year.

Back in 2013, Kimetto announced himself as a marathoner of otherworldly ability here in Chicago, the Kenyan blitzing the course record to win in 2:03:45 and in 2014 he went where no man has gone before – below 2:03 – when setting the current world record at 2:02:57.

Despite that run, many of Kimetto’s rivals will not be intimidated when they take to the line alongside him on Sunday morning. Since 2014 he has contested four marathons, failing to finish in two, with his best result a 2:05:50 to finish third in London in 2015.

Last year he could only finish 11th in London in 2:11:44, while he was forced to withdraw from the Boston Marathon earlier this year through injury. As a result, the 33-year-old remains an unknown quantity this weekend.

A stronger contender could be Stanley Biwott, who took victory at the New York City Marathon in 2015 before going on to finish second in London last year in 2:03:51, a run which makes him the second fastest in Sunday’s field.

Next in line is Feyisa Lilesa of Ethiopia, the Olympic silver medallist in the marathon who has a best of 2:04:52. Though his sole marathon outing this year was poor – Lilesa finished 12th in London in 2:14:12 – he has shown strong form on the build-up to Chicago, finishing third in the Great North Run half marathon in 1:01:32.

Home hopes will rest with Galen Rupp, the marathon bronze medallist in Rio last year who has a best of just 2:09:58, a time which doesn’t do justice to his true ability. Rupp, the Olympic silver medallist over 10,000m in 2012, transitioned seamlessly to the marathon last year, cruising to victory in the US Olympic Trials in 2:11:13.

Earlier this year he came close to winning in Boston, finishing 21 seconds behind Kenya’s Geoffrey Kirui, who went on to take the world title in London in August. Rupp has shown before that he is not unduly bothered by warm temperatures, and with sunny conditions forecast for Sunday in Chicago, he will warrant major respect from the East African contingent.

Others to consider include Ethiopia’s Sisay Lemma, who has run 2:05:16, and Kenyans Ezekiel Chebii and Bernard Kipyego, who have both run 2:06. Chebii took victory at the Lake Biwa Marathon earlier this year, running 2:09:06 in windy conditions, while Kipyego is a two-time winner of the Amsterdam Marathon, his PB of 2:06:19 coming there on his last victory in 2015.

Eritrea’s Zersenay Tadese may have repeatedly failed to master the marathon in several attempts in recent years – his best legal time is 2:10:41 – but he ran 2:06:51 during Nike’s Breaking2 attempt earlier this year, a time which is ineligible due to the use of rotating pacemakers.

If the men’s race appears a wide-open affair, however, the women’s looks to be shaping up for a head-to-head clash between two athletes whose path to marathon glory has been paved with much success at shorter distances.

Tirunesh Dibaba’s career is about as good as it gets in athletics: six global track titles, three Olympic gold medals, and the current women’s 5000m world record of 14:11.15.

She has impressed in her two marathons to date, clocking 2:20:35 on her debut to finish third in London in 2014 and second there earlier this year in 2:17:56, which made her the third fastest woman of all time at the distance. The last we saw of Dibaba, she utilised all her racing smarts and speed to take the silver medal over 10,000m at the IAAF World Championships in London two months ago, and if things have gone well for her since, she should prove a formidable favourite.

However, Kenya’s Florence Kiplagat is as tough an opponent as she could find. The 30-year-old has been a fixture on many marathon podiums since her debut at the distance in 2011, taking a brace of wins in both Berlin and Chicago.  Last year she routed the field here, coming home almost two minutes clear of runner-up Edna Kipagat, to win in 2:21:32, and with her knowledge of the course an undeniable asset she should serve it up to Dibaba when the race reaches the business end.

For the legions of supporters lining the streets, there remains hope of a US victory given the presence of Jordan Hasay in the field. The 26-year-old American made a superb debut in Boston earlier this year, clocking 2:23:00, and she recently finished third in the Philadelphia Rock n’ Roll Half Marathon in 1:10:42.

Given Chicago is a much less undulating course than Boston, Hasay appears primed to take another chunk off her personal best and challenge for a podium place. Kenyan pair Valentine Kipketer and Bridgid Kosgei, however, will make that no easy feat. Kosgei is a 2:24 performer at her best, while Kipketer is a former winner of the Amsterdam Marathon who has a 2:23:02 clocking to her name. 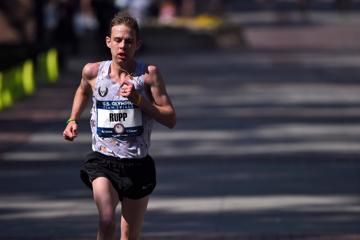 Rupp and Hasay lead US entries for Chicago Ma... 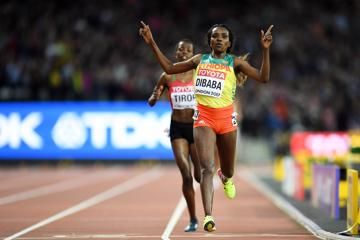 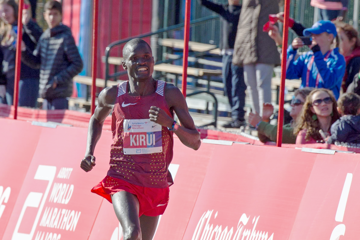 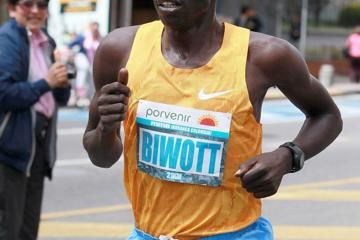 Biwott and Lilesa among latest additions to C...