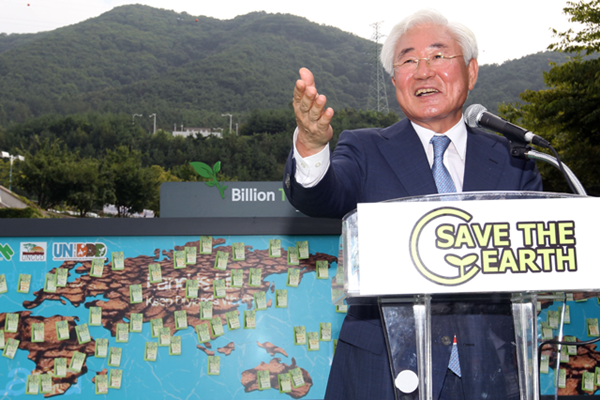 The rapid deterioration of the global environment in recent years has gradually affected our lives in various ways.

The IAAF Green Project is an IAAF initiative that reflects a commitment to find ways to contribute to the global environment through events such as the IAAF World Championships. We hope this project will contribute in some way to a healthier earth, one that supports a future in which everyone can enjoy Athletics. We believe the IAAF World Championships should continue to be a venue for determining World champions not only from among a few who are blessed by their environment, but from among all humanity.

The IAAF Green Project for a healthier earth after a pilot project in Helsinki 2005 was officially launched in 2007 during the IAAF World Championships in Osaka, and has continued in Berlin 2009 and Daegu 2011.

At the 2009 World Championships in Berlin, IAAF Partner Toyota provided 200 cars with ecologically sensitive technology including 100 Prius hybrid vehicles. Another Berlin initiative was the ‘Avenue of Champions’. Each gold medal winner participated in tree planting ceremonies to create a green canopied avenue next to the stadium. This was implemented together with the ‘Plant for the Planet’ programme, which is a United Nations Environmental Programme aiming at planting 1 billion trees.

Additionally, 73 tonnes of waste were recycled during Berlin 2009, with 620,000 KWH of green power used for television broadcasts.

In 2011 the City of Daegu was equally committed to the conversation of the environment, thereby laying the foundations for a green, eco-friendly 2011World Championships.

Solar energy panels were installed in the stadium, the Athletes’ Village and the EXCO Congress venue, and the city of Daegu also introduced an environmentally friendly public transportation. Furthermore, the LOC organised public awareness campaigns city and nationwide to help educate the public on the use of recycled goods.

Also, as part of the IAAF Green Projects initiatives organised in Daegu, a Tree planting ceremony was held on 31 August 2011, in a park west of Daegu Stadium next to the Sports Museum, in which the IAAF Council took part led by President Lamine Diack and the Mayor of the City of Daegu Kim Bum il and his fellow LOC Co-President Hae-young Cho.