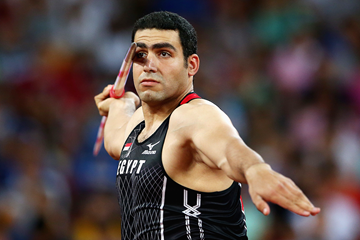 When athletes mention disruptions to their preparations coming into a major championship, they are usually speaking about injuries, or viruses, or even what’s usually known as ‘niggles’. The common dominator is, it’s all about them.

However, after earning Egypt’s first ever medal at an IAAF World Championships, Ihab Abdelrahman El Sayed revealed that something outside the self-obsessed, hermetically sealed world of the elite athlete had hindered his planning and training for Beijing: looking after his unwell mother.

“It was very difficult for me this year because my mother had back problems and could not even walk,” said El Sayed. “I was driving three hours every day to Cairo and back to help her.

“I did not eat, did not sleep properly. That is why I didn’t do well at some competitions before. But now she should be OK and is starting to walk again. This medal will be a motivation and a gift for her.”

El Sayed’s mighty second-round throw of 88.99m in Beijing would have been enough for gold at the past two World Championships in Moscow or Daegu.

Until his training partner Julius Yego – or at times his virtual Kenyan training partner as both liaise with their Finnish coach Petten Piironen via email and social media for much of the year – produced his monster effort of 92.72m, an African record, it was starting to look as if the Egyptian was heading for the top of the podium.

Piironen, a former 76-metre javelin thrower who is based at the IAAF Accredited Training Centre, the Kuortane Sports Institute in the west of Finland, first became involved with El Sayed seven years ago after the Egyptian had sought advice over improving his technique.

The Finn recalls how El Sayed’s first visit to Kuortane during the winter of 2008, set to be for three months, became just three weeks as the Egyptian struggled with the chilly climate and a lack of English.

Another six-week visit took place the following year, but by then coach and pupil – the latter committed to living in Egypt because of his studies – had established regular contact via Facebook and were able to discuss the detailed  technical improvements Piironen felt were necessary to make the most of a mighty natural talent.

“At the time, his only real training was lifting weights, he didn’t really have any technical help,” recalled Piironen.

“He was quite strong, but quite clumsy. I gave him some programmes to improve his physical properties when he went back to Cairo. He had very bad legs for running and jumping.”

“He could be a 90-metre thrower with the help of better coaching,” added Piironen, prior to the championships. “His throwing arm is one of the best I’ve ever seen. He is big and strong and has a natural gift for throwing. He can run faster, get strong and bigger.”

This prediction all but came true at last year’s IAAF Diamond League meeting in Shanghai, where El Sayed stunned onlookers and won with what was then an African record of 89.21m.

Behind that achievement was the increased financial support which El Sayed received following his efforts at the 2013 IAAF World Championships, where he finished seventh following a national record of 83.62m in the qualifying round.

This enabled him to return for another training trip to Kuortane and go on a training camp in South Africa.

His efforts in the Bird’s Nest more than underlined the fact that the Shanghai performance was not a one-off, and showed that El Sayed seems to be quite at home in China.

El Sayed can approach next year’s Rio 2016 Olympics with the confidence of being a world medallist who has now proved a consistent operator at the highest levels.

“I’m crazy happy because I won the first medal ever for my country,” said a delighted El Sayed in Beijing. “I can’t speak. I feel like I dream now.”

Happily, despite the excited rhetoric, the Egyptian did find some subsequent words to describe the competition he had helped to shape.

“This final was exciting and tough. I am glad to throw in this competition and to be a part of it. It is wonderful to win this first medal for my country because I love my fellow countrymen and I love my family.

“I have to say a big thank you to my coach. He is my big brother, my friend, always supporting me.”

Asked to reflect on the journey he had taken to reach the World Championships podium, El Sayed responded: “There was no athletics in my country, only football. The teacher in school said I can try some sports and I tried and I threw 51 metres in the first competition, and I won.

“I’m happy for that now. Now in Egypt there are many people training in athletics. And I hope many more Egyptians will do good things in track and field soon.”