From nowhere to the front, Berian’s ascent continues

The plan in Portland for Boris Berian was perfectly simple.

Get to the front of the men’s 800m field at the IAAF World Indoor Championships Portland 2016, and stay there.

The 23-year-old American’s front-running exploits in his race whipped the crowd into a frenzy and punctuated another highlight on his remarkable rise from unknown to gold medallist.

Berian’s first 200m split of 23.92 scrambled the field behind him and put Berian in the pole position that he wanted. “Coming through I saw 23 I was just like, wow, this is definitely going to hurt.”

He did slow, crossing 400m in 49.73, but so did the others; and while the chasing pack that included Antoine Gakeme of Burundi, Musaeb Balla of Qatar, and the USA’s Erik Sowinski fought for positioning, Berian was well clear.

“Boris got the crowd going and it’s a testament to how he raced and he really set that up to be a heck of a race,” said Sowinski, who placed third behind Gakeme.

With each successive lap, the noise inside the Oregon Convention Center grew as it became apparent that Berian’s bold move was paying off.

“I really wasn’t focused on what time that was going to be (for the first 200m) whether that was 26, 24, 23 (seconds). I just want to get out in front,” said Berian. “That’s how I feel more comfortable racing and that’s exactly what I wanted to do.”

From Big Macs to big bucks

Berian is quite accustomed to taking his own route.

Even passionate followers of track and field didn’t know who he was early in 2015. After being declared ineligible to compete at Adams State, Berian trained by himself. He wasn’t fast enough for a professional contract so he worked at McDonald’s to earn money.

“That was a source of income at the time, I had my own plans just training by myself and getting money at the time,” he added, knowing that money in the short term will no longer be an issue as he got a US$40,000 first prize on Saturday in addition to his gold medal. “I was just staying positive and hoping this dream would happen on my own.”

But with no coach and no team, he also had trouble getting into races. Eventually, he linked up with Big Bear Track Club in California and trained with Carlos Handler.

In the 2015 outdoor season, he burst on to the scene, running faster than 1:44.00 at IAAF Diamond League meetings in New York and Monaco.

Between those performances, though, there was the US Championships where his inexperience showed and he did not advance from the rounds. This year, he has opted for a more strategic approach to the early rounds of racing.

”I was really just excited,” Berian said, describing his 2015 as “not too much experience, just kind of going for it every time".

But any plans of being conservative were pushed aside on Saturday and Berian was back at the front.

The lead did dwindle over the last lap as Berian felt his legs tighten over the final 150 meters.

“Pick up your knees, let’s keep moving them and get to that finish line,” he told himself. “I got excited, stayed positive and trusted in my training and hung on.”

He admitted that he didn’t think he would get this good, this quickly. He wanted to make a championship team, but when he first started working out with the Big Bear Track Club, he didn’t imagine it would only take one year.

“Everything has progressed a lot faster than I thought it would.”

Still, there is a feeling that there is more to come. He’s still unsponsored and said that he didn’t back off on training for the World Indoor Championships. The talent that his high school coach first spotted when he ‘brainwashed’ Berian to stick with track is now blending with fearless tactics and growing experience.

“It’s definitely a huge, huge accomplishment," he said. "Coming from nowhere a year ago to world indoor champion, it’s definitely going in the best direction it possibly can.” 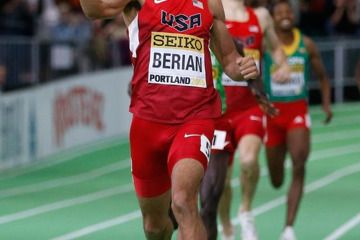