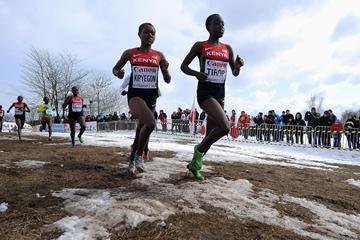 She may have successfully defended her IAAF World Cross Country Championships junior title over 6km in the Polish city of Bydgoszcz on Sunday (24) but Kenya’s Faith Kipyegon now intends to step down in distance in order to challenge the seniors on the track.

After emerging as a comfortable winner in the fiercely competitive Kenyan trials, last month Kipyegon edged marginally clear of her teammate, Agnes Chebet Tirop, in the closing metres of the race to clinch the gold medal.

“I’m so happy to defend my title in Bydgoszcz, it delights me so much,” commented Kipyegon, clutching a cup of tea after warming down after triumphing in sub-zero temperatures

“My training went well in the run-up to this event, I was training on Mount Kenya and it’s a place that’s relatively cold as I knew it would be here.

“I expected to win but I knew it would be tough here, I just hoped to defend my title. The course was tough, there was a lot of ice and it was very cold for me but my hope was still to win.”

The 19-year-old became only the third woman in the history of the event to defend her title after her compatriot Viola Kibiwot won in 2001 and 2002 and Ethiopia’s 2012 World indoor 1500m champion, Genzebe Dibaba enjoyed back-to-back victories in 2008 and 2009 before embarking on a fine senior career.

However, with the Championships now embarking on a two-yearly cycle, it may be a long time before anyone equals Kipyegon’s specific feat of winning twice in three calendar years.

She is now looking to new challenges, and preferably races in warmer climes.

Kipyegon revealed that she now plans to concentrate on the shorter 1500m distance during the forthcoming track season.

Last summer, she set a personal best of 4:03.82 in her opening race of the season at the Samsung Diamond League meeting in Shanghai.

She returned home and finished third in the Kenyan Olympic trials and, after winning at the 2012 World Junior Championships in a Championships Record of 4:04.96, she was selected for the London 2012 Olympic Games but, sadly, failed to progress beyond the heats.

This summer, utilising her Olympic experience as well as the strength gained in cross country races this winter, she hopes that she will be able to compete more effectively against her older peers on the international stage at the IAAF World Championships in Moscow, which will be held between 10-18 August.

“After today’s race I expect to race the 1500m in Moscow, I’m comfortable at that distance and I like it,” said the quietly spoken Kipyegon, typically factual and modest about her ambitions.

It would take a brave soul indeed to bet against this talented teenager progressing further and, with her birthday being on 10 January, she has the opportunity to become the youngest ever medallist at the distance in the history of the IAAF World Championships.

View the full results for Women's U20 Race Final