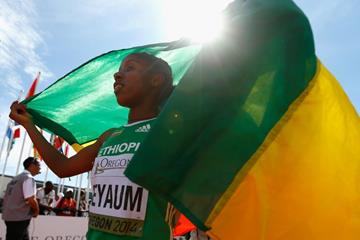 This winter, world junior 1500m champion Dawit Seyaum will be hoping to erase unhappy memories of a previous indoor-related experience.

Still only 18 and a junior, she was selected as part of Ethiopia’s 2014 IAAF World Indoor Championships team to go to Sopot, Poland last year, but could not travel there due to visa issues.

“I was eager to be in Sopot and was training hard with the team and was hoping to to compete well,” she recalled.

“But I could not make it because of visa problems. I was very disappointed about this. My experience indoors is very limited. So in 2015, I hope to run in more indoor races to gain experience.”

Seyaum may still be unhappy about her brief 2014 indoor campaign, and she might have been a medal contender in Sopot despite previously running just one race indoors, when she won over 1500m in Prague last February in 4:09.08, which placed her sixth on the all-time junior indoor list, but she certainly has reason to be proud of her other achievements.

In a busy year she became only the fourth Ethiopian to run faster than four minutes for the 1500m, clocking a national junior record time of 3:59.53 at the IAAF World Challenge meeting in Marrakech, Morocco.

“It almost never happened. Prior to the trip to Marrakech, there were some challenges to get my club’s permission to compete in the race because the dates for the national championships were too close.

“After getting the permission, I went to Marrakech for the meeting thinking fast times would be possible, but I did not expect to sub-four minutes.”

Marrakech would again prove to be a fertile medal hunting ground for Seyaum who returned there before the end of the season after a dominant 1500m victory at the IAAF World Junior Championships last summer.

“Ahead of our trip to Eugene, my fiancé and personal coach Efrem [Hailu] warned me to run wisely because it was a championship race,” said Seyaum.

“The essential thing was winning gold for my country, not getting a fast time. Keeping his advice in mind, I won the gold, but it was a good lesson in how to run in the championships.”

However, last year also provided a steep learning curve for the youngster, who believes tactical naivety cost her victory in the IAAF Continental Cup in Marrakech last September.

“I am not an avid follower of social media, but when Efrem showed me videos of my race (at the IAAF Continental Cup) in Marrakech, I really regretted my mistakes. I was too eager to win the race, but an early move was the reason why I could only finish third.”

The fifth child and the only athlete in her family of six children, Seyaum was born near Fiche, a town about 100km from Ethiopia’s capital Addis Ababa. She got into athletics, “because of the happiness winning a race brought to me."

“Winning felt great, (I recall) competing in a school competition in 2010 and winning the 200m and 800m. My success in those races helped me progress through Wereda (district), zone, and regional levels. My family did not really think highly of the sport, but they were supportive when I told them I was doing well in the races.

“Due to the lack of access to media, I really did not grow up seeing other top athletes and did not have role models to speak of until recently.”

It took about three years before her big break came in two consecutive domestic 1500m races that took place in March 2013: the Short, Middle Distance, Field Events, and Walks Championships and then the 2nd Ethiopian Juniors Championships.

“My winning time of 4:13.12 in the short, middle distance, field events, and walk championships helped me get spotted by a manager.”

She won a silver medal there in 4:15.51 behind compatriot Tigist Gashaw, but avenged that defeat a month later at the African Junior Championships in Mauritius and took the gold in 4:09.00 ahead of her compatriot.

Seyaum is now eager to get more indoor races under her belt this winter and she opens her 2015 campaign the New Balance Boston Indoor Grand Prix, an IAAF Indoor Permit meeting, on Saturday (7).

The world junior indoor 1500m record, currently held by another Ethiopian, Kalkidan Gezahegne, who ran 4:03.28 in Stockholm five years ago, is certainly a possibility this winter given her form during the height of the summer in 2014, when she also ran 4:00.66 at the IAAF Diamond League meeting in New York.

However, this is far from her priority for the year.

“My main focus will be the IAAF World Championships in August. Besides that, I would like to run in some Diamond League races to shape up for Beijing. If I keep up the hard work, there will not be any reason why I cannot break the Ethiopian 1500m record (of 3:56.54) this year.”

If she gets on the podium in Beijing, she will also become the youngest ever medallist in the discipline, which will also be quite a notable feat and one worth striving for.