After Zurich triumph, Kipruto is latest addition to list of shoeless wonders

The first of this season’s IAAF Diamond League finals in Zurich produced a classic sprint finish in the women’s 5000m, where Kenya’s Hellen Obiri held off Sifan Hassan of the Netherlands, an IAAF Diamond League record shot put of 22.60m from New Zealand’s world champion Tomas Walsh, and a winning javelin throw of 91.44m from Germany’s Andreas Hofmann. But it will be remembered for the shoe – or rather, the missing shoe.

There have been numerous examples of athletes losing shoes on track and road but it is hard to recall tougher circumstances than those in which Kenya’s world and Olympic 3000m steeplechase champion Conseslus Kipruto suddenly found himself a minute and a half into his race as his left shoe was sent flying by an opponent’s foot.

With more than three quarters of the race ahead of him, he had to fight down any natural tendency to panic and re-cast his race strategy against a field that included the eager 22-year-old Moroccan, Soufiane El Bakkali, whom he had beaten to world gold in London the previous summer.

The Moroccan must have thought he had done enough as he drove for home around the final bend with the field in his wake. But Kipruto wouldn’t give in. All the way down the finishing straight, the smaller man with the white top and the bare foot refused to let El Bakkali move clear, and after clearing the final hurdle a metre or so behind the leader, he found the drive, somehow, to move past and win. It was the performance of a champion.

El Bakkali dropped, exhausted to the floor. When he was finally helped up by two other runners, he smacked his fist into his palm before leaving the arena.

Provided the injury Kipruto sustained isn’t too serious, the two men are due to race against each other at next week’s IAAF Continental Cup, but that time they will be on the same team, representing Africa.

Rarely has any athlete had to run so far on the track with such a handicap, but Kipruto’s compatriot Eliud Kipchoge, the Olympic marathon champion, had to put up with faulty, rather than absent, shoes for a far longer period when his insoles started flapping out halfway through the 2015 Berlin Marathon. Like Kipruto, he still found a way to win.

At last year’s IAAF Diamond League meeting in Eugene, another Kenyan runner, 18 -year-old Celliphine Chespol, produced an extraordinary piece of running as, despite losing one of her shoes on the penultimate water jump, she pressed on to finish second in 8:58.78, a world U20 record which made her the second fastest runner of all time.

The most acrimonious case of footwear malfunction occurred on the final lap of the men’s 10,000m at the 1993 IAAF World Championships in Stuttgart, when leader Moses Tanui had his heels clipped by the then up-and-coming Ethiopian Haile Gebrselassie.

Tanui reacted, waved his arms, and then flung off his partially dislodged left shoe and made an immediate effort to outsprint Gebrselassie, but the latter passed him to win the first of what would be four world 10,000m titles.

“I could not grab the last lap the way I wanted,” Tanui said in a TV interview while carrying a Kenyan flag and still wearing one shoe. “If I had my shoes, he would not beat me.”

Moses Tanui and Haile Gebrselassie in the 10,000m at the 1993 IAAF World Championships in Stuttgart

Curiously, those Stuttgart championships included two other shoe-related incidents. In the men’s 400m final the shoes being worn by the reigning Olympic champion Quincy Watts of the United States effectively disintegrated during the race.

“When I tried the shoes on in warm-ups, I kept hearing this funny popping sound,” Watts later told the USC athletics site. “I checked my spikes and everything was tight and nothing was loose. So then once the race started I realised, ‘Hm, after the first 100, I’m normally in better position and I’m not catching these guys, and not only am I not catching these guys, they’re actually moving away from me!’

“And then all of a sudden I hear this flapping sound again, and I look down and I see my shoe opening and closing, flapping like a banana peel at the bottom. And I said, ‘Oh my God, it’s my shoe.’ And at that point with about 140 meters to go, I just sucked it up and gave everything I had.”

Watts missed the podium by one place.

There was a third footwear malfunction in Stuttgart as the insole in one of the shoes being worn by US Olympic steeplechaser Mark Croghan came apart after the first water jump of the final.

Croghan, who confessed he had used insoles he had bought himself from a local outlet, still managed to finish fifth in a personal-best time.

Maybe it’s something about Stuttgart. British athletics followers of a certain age will recall the incident at the European Championships at that venue in 1986 when Brian Whittle, setting off on the third leg of the 4x400m final, lost one of his shoes as he took the baton when the incoming Kriss Akabusi trod on it.

Whittle had to run the entire circuit with a single shoe on. He recorded a split of 45.09 and he, Akabusi, Derek Redmond and Roger Black took the gold.

Skip forward to 2015 and another US track and field athlete hit footwear problems at an IAAF World Championships.

Jenny Simpson had her shoe partially dislodged by an opponent’s foot in the 1500m final as she made a move around the halfway point of the race.

“Pretty intense jostling, and that’s where I started to lose half of it,” Simpson told Universal Sports. “I was clinching my toes as hard as possible.

Simpson eventually kicked the shoe off with about 600 metres left and despite continuing to try to give chase to the eventual winner, Ethiopia’s Genzebe Dibaba, she was passed by a succession of runners and eventually finished 11th.

By then, she said, her thoughts were turning to preserving her foot – which was already bleeding – from too much damage.

“It’s not that it’s so intensely painful that you can’t keep running, but it’s for training,” Simpson added. “You can’t run on a foot that doesn’t have skin. As everyone went by me, I just thought, I’ll get them next week.”

A little earlier in 2015, Simpson’s compatriot Ajee Wilson lost her right shoe when clipped by another runner while jockeying for the lead approaching the final bend in the US Championships 800m final.

Wilson still managed to earn a World Championships place as she finished third by 0.04 of a second.

“I didn’t really have time to think,” Wilson, who later withdrew from the 2015 World Championships because of a leg injury, told media after the race. “It kind of was halfway on, so I wiggled it off.”

Etenesh Diro in the steeplechase at the Rio 2016 Olympic Games

Etenesh Diro had one of her shoes clipped in a tangle with another runner as she ran in the pack with a couple of laps to go in her steeplechase heat at the 2016 Olympics.

The Ethiopian caused something of a pile up as she knelt on the track and attempted to replace it, unsuccessfully, before discarding both it and her sock and finishing the race with one bare foot.

A disconsolate Diro finished outside the qualifying places, but was allowed to progress following an appeal.

A barefooted Abebe Bikila wins the 1960 Olympic marathon in Rome

But the most famous Olympic example of barefoot running occurred back at the 1960 Rome Games, where another Ethiopian – Abebe Bikila – arrived as a late replacement to run the marathon and found that the shoes issued to him by the team did not fit comfortably.

He ran barefoot and set a world record in what would be the first of two historic Olympic marathon victories for him – albeit that by the time of the second, at the 1964 Tokyo Games, he had a pair of shoes he found comfortable. 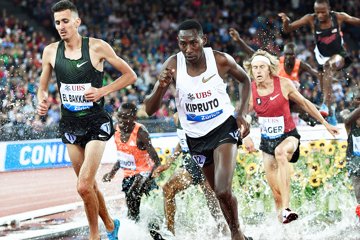