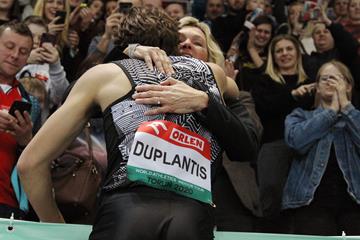 Helena Duplantis, mother of the highest flyer in athletics

The maternal branch of the family tree formed just as integral a part of Mondo’s development.

Growing up in her native Sweden, Helena Duplantis (née Hedlund) recalls being a part of another sporting household. Her father, Lars-Ake, was the head of the local athletics club and a former national-standard pole vaulter. He continued to compete in masters competitions up until the age of 80.

“I went to my first track meet when I was six, but I was used to going down to the track even before that,” she says. “So I grew up around the sport; the long jump pit was pretty much my playground.”

A prodigious all-round talent, Helena represented Sweden in the heptathlon at international championships. She set her PB of 5314 in 1983 at the age of 18 and she had a best of 11.91m in the triple jump.

At the age of 20, she moved to the USA to study at Louisiana State University, also competing on LSU’s athletics and volleyball teams. It was there where she met Greg, a 5.80m pole vaulter, whom she would go on to marry in August 1987.

They reared four children – Andreas, Antoine, Armand and Johanna – and, unsurprisingly, all of them displayed great sporting ability. Greg and Helena never had to force their children into taking up a sport; instead, they simply made everything available to them in their backyard. A pole vault bed, a batting cage, a trampoline, trees and ropes to climb – it was near impossible for any of the Duplantis children to ever feel bored.

All four of the kids took to pole vaulting. Andreas, the oldest, was the first to make an impact. He represented Sweden at the 2009 World U18 Championships and then in 2010, at the age of 17, he cleared five metres for the first time. He made several other international appearances, reaching the final at the 2012 World U20 Championships, and improved to 5.42m in 2013, but he stopped competing in 2015.

Antoine also showed early promise, vaulting 3.96m at the age of 14, but he was also talented in many other sports and eventually settled on baseball. He was one of the top players at LSU and now plays professionally.

Youngest sibling Johanna, meanwhile, is still only 17 years of age but she recently set a PB of 3.66m.

And then there’s Mondo, pole vault legend in the making. Although he’s aged just 20, everyone in the athletics world – and many people outside of it – is already aware of his achievements. World U18 champion, world U20 champion, European champion, world silver medallist, and – as of last month – world record-holder.

In some ways, for someone who has been pole vaulting from such a young age, and breaking all manner of age-group records along the way, it seems entirely reasonable that he should go on to continue his progression with more record-breaking feats as a senior.

And yet the sport is littered with examples of similar prodigious talents who were head-and-shoulders above their peers in their teenage years but unable to make it as a senior. Many of these are victims of burnout, a side-product of an over-ambitious coach or parent who subjects the athlete to a punishing training regimen.

That was never the case for the Duplantis kids, though.

“It was just so natural, for all of them,” says Helena. “I guess we’re lucky that they all like sports. It was just a natural thing (for Mondo) because his oldest brother (Andreas) was involved in a lot of sports and played American football, baseball and he ran track too. The pole vault bed in the back yard was a natural playground for them.”

Mondo started to make a name for himself in 2015 when he won the world U18 title in Cali, clearing a PB of 5.30m. “That’s when I started to realise the potential he had,” says Helena.

Just two years later, aged just 17, Mondo broke world U20 records indoors (5.75m) and outdoors (5.90m), won the European U20 title and reached the World Championships final. He made an even bigger impact in 2018 when he won the senior European title with a world U20 record of 6.05m.

After earning his first senior global medal in 2019, taking silver at the World Championships, his progress has continued this year. During an undefeated five-meet indoor campaign, he cleared six metres in all five competitions and broke the world record twice: first with 6.17m in Torun and then with 6.18m one week later in Glasgow.

While Helena has been at every meet this year to give Mondo technical advice and moral support, she has also been able to enjoy his performances as a fan, watching in complete awe.

“It’s been amazing,” she says. “To watch him break the world record was unbelievable. That still feels surreal. The European Championships was amazing too, breaking the six-metre barrier for the first time. The meet and the atmosphere was just amazing.

“I’m so glad I’ve been able to follow him around,” she adds. “It’s nice to be part of it. It’s been an awesome journey, especially last year when they were both in college at Louisiana State University. It was Antoine’s senior year and he had an amazing year of playing baseball. And it was Mondo’s first year on the track team. It was just so much fun.

"I've tried pole vault it's not easy, but for him, it's just easy."

Helena Duplantis, mother of one of the highest fliers in athletics. #IWD

“He never stops surprising me and my husband with his results and his progression,” says Helena. “It just comes so easy for him. He always told me that pole vault is so easy and I really believe that. For him, it is easy. I’ve tried pole vault and I don’t think it’s easy. But for him, it is.”

It certainly looked that way when Mondo set his world records in Torun and Glasgow. And immediately after both record-breaking vaults, he headed straight to the stands to embrace his mother.

In between lighting up runways on this year’s World Athletics Indoor Tour, Mondo took time to reflect on the importance of having his mother by his side – not just at competitions, but at every stage of his career.

“My mother is there just as much as, maybe more than, my father,” he says. “Obviously not taking any credit away from my father, but I think my mom deserves a lot more respect than she gets. I think a lot of people just think it’s my father that does all the behind-the-scenes work, but my mother does just as much.

“The fact she’s been at all my indoor meets this year makes it extra special,” he added. “She should be here; she’s the reason why I’m even in the position I’m in today.”