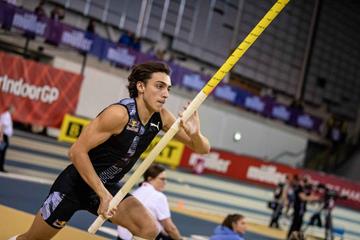 One week after breaking the pole vault world record in Torun, Armand Duplantis improved the mark to 6.18m* at the Muller Indoor Grand Prix Glasgow, part of the World Athletics Indoor Tour, on Saturday (15).

The Swedish vaulter was in imperious form. He opened at 5.50m and got over 5.75m on his second try. Two-time world champion Sam Kendricks led at that point, but it was short lived as the US athlete exited the competition at the next height, 5.84m.

Duplantis, though, sailed over on his first attempt. With no one else left in the competition, the 20-year-old then flew over 6.00m, a UK indoor all-comers’ record. His clearance over the bar suggested he was capable of going much higher.

He had the bar moved up to 6.18m. A minor technical glitch with the starting equipment for the women's 400m allowed a window of opportunity for Duplantis to take his first attempt at the world record height. And one attempt is all he needed as he sailed well clear of the bar, setting his second world record in as many weeks.

“This was such a great competition,” said Duplantis as he was handed his world record bonus cheque for $30,000. “There was such great energy the crowd was giving me and I really thrive off that.

“I felt like I was over it and once I was going over I knew I had it,” he added. “You can’t tell how far away you are from the bar but it felt like a good jump from the get-go. I tried a stiffer pole and it worked out.

“It's unfair to think I'll break it every time I compete,” added Duplantis. “I don't think about it too much. You don't need to break a record to win every comp. Winning is always the goal, then if I have the energy left I’ll crank it up a bit.”

The CEO of men’s pole vaulting making a world record of 6.18m look like a walk in the park🚶‍♂️

Middle-distance wins for Reekie and Muir

Breakthrough performer Jemma Reekie lived up to her promise to win the women’s 1500m, much to the delight of the home crowd.

The world indoor 800m leader bided her time for much of the race, allowing the pacers to lead the field through 400m in 1:04.86 and 800m in 2:11.07. Ethiopia’s 2016 world indoor silver medallist Dawit Seyaum tracked the pacers and found herself out in front with 300m to go.

Reekie then started to take closer order, but so too did Canada’s Gabriele DeBues-Stafford and Morocco’s Rababe Arafi. Seyaum kicked hard on the last lap, but Reekie found some space on the inside to move from fifth to second with 100 metres to go. Reekie moved into top gear off the final turn and passed Seyaum just metres before the line, finishing first in 4:04.07.

Seyaum, contesting her first race of the year, finished second in 4:04.24, her fastest indoor clocking for four years. Arafi was third in 4:05.34.

“It was a good race and a good confidence boost,” said Reekie. “I try to focus on myself out there because I'll only ever work with the pressure that I put on myself and I don't feel it off other people.”

Double European indoor champion Laura Muir fell short of her world record target in the women’s 1000m, but her winning margin underlined the fact she is in impressive form.

World indoor champion Adam Kszczot of Poland secured his first victory of the year to strengthen his lead at the top of the 800m tour standings.

After an opening 400m of 52.60 from the pacemaker, Kszczot and Kenya’s Cornelius Tuwei were level with one another as the bell sounded for the last lap. Tuwei moved into the lead and was a few strides ahead with 100m to go, but Kszczot timed his finish to perfection to win in 1:46.34, 0.18 ahead of Tuwei.

World indoor 3000m bronze medallist Bethwell Birgen, a winner in Boston and Karlsruhe at that distance, moved down to the 1500m in Glasgow and sprinted away to a comfortable victory.

Her 1.93m winning clearance in the high jump may have been her lowest leap of the year so far, but it mattered little to Ukrainian teenager, who finishes the tour at the top of the standings with 20 points and a $20,000 bonus.

Fraser-Pryce picks up where she left off six years ago

The last time Shelly-Ann Fraser-Pryce set foot on an indoor track was six years ago when she won the 2014 world indoor 60m title.

But the 33-year-old Jamaican looked at home at the Emirates Arena as she blasted out of the blocks and into an immediate lead, one which she held all the way to the finish to win the 60m in 7.16.

The men’s race was even more clear-cut. USA’s Ronnie Baker eased away from the rest of the field to win in 6.50, his fastest clocking since taking world indoor bronze in 2018. Compatriot Mike Rodgers was a distant second in 6.67, just 0.01 ahead of European indoor champion Jan Volko.

The World Athletics Indoor Tour standings for the women’s 400m took an interesting turn. Pre-event leader Lisanne De Witte had been hoping to consolidate her position at the top of the leader board, but the Dutch sprinter could only look on as Britain’s Jessie Knight and Poland’s European champion Justyna Swiety-Ersetic battled it out for the victory.

Swiety-Ersetic produced her trademark strong finish, but even that wasn’t enough to catch Knight as the hurdles specialist pulled off one of the biggest surprises of the meeting, winning in 51.57. Swiety-Ersetic was close behind in second, 51.68.

With one more scoring 400m race left on the tour, Swiety-Ersetic now holds a slight lead over De Witte in the standings, 24 points to 22.

USA’s Obi Igbokwe looked to be on his way to a gun-to-tape victory in the men’s 400m, shrugging off a mid-race challenge from three-time world indoor champion Pavel Maslak. But the tall figure of Jamaica’s Akeem Bloomfield came striding on the outside in the closing stages, catching a fading Igbokwe just before the line.

As was the case at last week’s World Athletics Indoor Tour meeting in Torun, Alina Talay and Andrew Pozzi came out on top in the 60m hurdles.

The women’s race was possibly the closest contest of the day. After clattering the first hurdle in her heat, world 100m hurdles champion Nia Ali got off to the best start in the final. World indoor silver medallist Christina Clemons then drew level with her at half way, but Talay came on strong over the final two flights, just getting the edge on the line to win in 8.03.

Ali was given the same time in second place while Clemons clocked 8.04 in third.

It took Pozzi a couple of barriers to move into the lead in the men’s race, but he held off a good challenge from Kuwait’s Yaqoub Mohamed Al Youha to win by 0.04 in 7.57. Milan Trajkovic, who won European indoor gold on this track last year, was third in 7.72.