Taste of success has given Wightman hunger for more

The Las Vegas Strip, at 6am on a Saturday morning, is not the kind of place you expect to find a world-class athlete.

At that time, it’s populated mostly by drunks and gamblers, the neon glow yet to dim on the city’s Friday night lights.

In recent weeks, however, those making their way home through the dawn haze were met with an unusual sight: Jake Wightman, one of the world’s best milers, hurtling down the sidewalk, slicing a path through the crisp autumnal air.

The 23-year-old had travelled to Vegas for a pre-season gathering with his agency, Global Athletics & Marketing, and after finding himself wide awake long before the sun had risen, decided it was as good a time as any to hit the streets for a tempo run followed by some 60-second repetitions.

“People were jeering as I was going past,” he said. “There were lots of them still on their nights out.”

Weeks before Wightman had been just like them, blowing off steam on his end-of-season break, but as all great athletes know: you can’t soar with the eagles by day if you continue to hoot with the owls at night.

When he sat down later that day in Vegas to reflect on a whirlwind 2017, Wightman was already back into base training, his sights trained on a big year ahead.

“It’s been a tough first few weeks,” he said, “because you feel like a fat mess.”

At this time of year, his focus is on strength work – Wightman runs 70-75 miles a week, with two workouts of long reps and hill repeats – but he knows that to accomplish what he wants in 2018, he’ll have to hit the ground running.

Since late last year, the IAAF World Indoor Championships Birmingham 2018 have been on his radar, and Wightman – who usually never races indoors – made sure to compete in Boston and Glasgow earlier this year to get a feel for the tighter tracks.

“I’m pretty inexperienced indoors,” he admits. “But every champs I go to now I want to see if I can come away with medals.”

Wightman was a distant spectator during the last edition of the championships in Portland, though watching on TV lit a fire under him to be part of the action when his home nation played host.

“I’d love to be on the other side,” he said. “The crowd seem way more energetic because it’s so close and it’s more of a spectacle. The way they did Portland, with the athlete entrances, made indoors way more appealing. It was more of a show.”

Wightman, however, is well aware how hard it is to time it right on the biggest occasions.

In June, he produced one of the biggest upsets seen on the IAAF Diamond League circuit when outsprinting Kenya’s Elijah Manangoi to win the 1500m in Oslo, clocking a PB of 3:34.17.

In the days after he received congratulations from British greats Sebastian Coe, Steve Cram and Steve Ovett, and later that night, just like in Vegas, he lay awake into the dawn hours as he tried to comprehend his achievement.

“Everything clicked on that day,” he said. “There was no pressure because I was one of the slowest in the field. I didn’t go off too quick; those who did started coming back and when you sense that, it spurs you on. With 200 to go there was a chance to win it, and you have to take these opportunities.”

That race was less than two months before the IAAF World Championships in London, and it made Wightman believe he could challenge for a medal.

“It gave me confidence that if I can beat them on that day, I can do it again,” he said.

But London was a let-down. Wightman was eliminated from the 1500m after finishing eighth in his semi-final, unable to find the same wheels he had eight weeks earlier when outkicking Manangoi, who would go on to win gold in London.

“Going out in the semis was a big disappointment because the champs is where your season is defined,” said Wightman.

What made it harder was the awareness that his father, Geoff, would be feeling just as crushed, though doing his best to mask it in the stadium commentary box.

Geoff, who has coached his son throughout his career, is a former international marathon runner – as is Jake’s mother, Susan – though he’s best known these days as one of the sport’s leading announcers. He guided Jake to the European junior 1500m title in 2013 and has been there, often behind the microphone, for all of his biggest races.

“I get fed up hearing him,” says Jake with a laugh. “But when I’m running well it’s nice to know he’s there and feeling the same way I do. I’ve had many shocking races when he’s been announcing, and there’s no hiding.”

Despite that, Wightman has never considered any coach but his father. “I’ve always seen him as my coach because he knows me better than I do,” he says. “He knows exactly what works.”

In 2018, they will have a tricky task to balance preparations for three major championships, with April’s Commonwealth Games and August’s European Championships also representing major chances for Wightman to earn his first senior championship medal.

Though Wightman is a proud Scot – his family moved to Edinburgh when he was 10 – he will feel the full weight of a home crowd at his back if he can make the British team and toe the line in Birmingham next March.

But whatever happens in 2018, his dad’s advice will be the same as it was this year, and indeed every other year.

“As long as I give it a go to win a race, he’s usually pretty content,” said Wightman. “But if I’m sat doing nothing and let the race pass, then he’d be annoyed with me.

“That’s a good way to be because that’s why I’m in the sport – to win races.”

BACK
Pages related to this articleAthletes
Jake WIGHTMAN 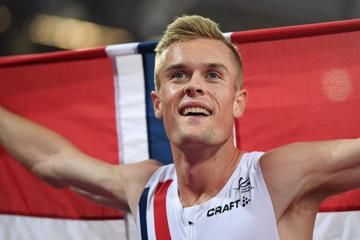 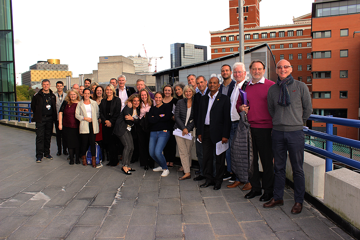 Preparations ‘on track for an amazing’ IAAF W...