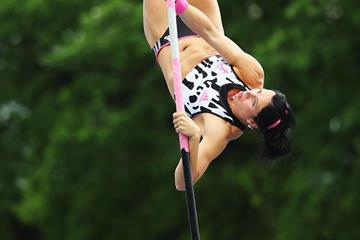 When Jenn Suhr returned home to upstate New York from Sopot, Poland and a disappointing fifth-place finish at the 2014 IAAF World Indoor Championships in March, the last thing she wanted to do was to immediately jump back into pole vaulting.

"I was in a foul mood and I wanted to take a break," said the Olympic champion. "It was supposed to be my vacation time but I knew that the time for change was now."

Suhr, and her husband and coach Rick, have affectionately labelled that change The Carbon Project.

Both freely admit it's a risk. Some pundits have called it insanity.

In truth, Suhr's unprecedented decision to switch from fibreglass to carbon fibre poles probably lies somewhere between the two. By Rick's estimation, 70 percent of elite women choose fibreglass over carbon while he believes the split is closer to 50-50 on the men's side.

"I think it is a risky switch and can understand why people would question it," said the US record-holder. "When you look at Bubka, Stacy Dragila, Svetlana Feofanova, Yelena Isinbayeva, Lavillenie, all of their records were set on fibreglass poles. People have come up to me and said, 'Oh, you are going to go back in two months.' I don’t know. Right now, I like the way that things are working out."

On Saturday, Suhr competed in her first IAAF Diamond League meeting of the season, finishing second to Brazil's Fabiana Murer with a height of 4.70m in New York.

"I felt good," Said Jenn. "The first couple of heights, I nailed them on the first attempt, but then I got a little fatigued. It's been a long week with the vault in Herald Square and my legs just didn’t have the same pop. But I got to plant a pole I had never jumped on, which is good."

But, with every world record over the past 20 years, and all of her career results achieved on fibreglass poles, some would question if it's not broke, why would Suhr want to fix it?

The answer can be found in a combination of factors.

First and foremost is the duration of pole vault competitions.

Rick points out that his wife is one of the few athletes who will warm up and then sit down potentially for hours before actually entering the competition when the bar reaches a greater height. Since she also carries the largest pole in the world, the lighter carbon pole is more advantageous at the end of a drawn-out competition.

"Having something lighter in my hand and being able to come down and sustain a marathon pole vault competition is important," commented Suhr.

Carbon is a naturally stiffer material than fibreglass and therefore gives a stronger return with a lighter pole. It also unbends with more speed than any of the fibreglass poles, or as she says, "there is a lot more energy in it."

"Technically, speed-wise the way that our vault is, carbon is giving us more return," said Rick. "We're loading in and getting so much out. I think as our vault has improved, the fibreglass pole has not returned us as much as we've improved as jumpers.

"The other thing is consistency. Yes, Jenn won the Olympic gold medal and broke the world indoor record, but day in and day out, our performances weren't as consistent as I would like them."

The Suhrs said they began contemplating this change almost three years ago, when they received their first set of carbon prototype poles. The following year, another shipment arrived, but those too remain untouched in the couple's Quonset hut training facility behind their home in Churchville.

"We were actually thinking of changing before the Olympic Games, but Jenn got hurt pretty bad before the Olympic Trials, pulled a quad," said Rick. "The timing wasn’t right. These changes don’t just happen overnight. As a coach, in my opinion you need three months, absolutely healthy and everything going right to make the change.

"Finally, this year we were healthy enough and felt that the circumstances of the meets had become such where they are now more meets of survival than pole vaulting."

Saying he has "learned to be very cynical and untrusting," Rick put the new carbon poles through extensive testing before settling on them as the best option for Jenn. That included having three male vaulters of like ability plant the poles numerous times under surveillance.

"Rick dissected it more than I have ever seen," said Suhr. "If you looked at our building, it looked like some sort of high-tech experiment was going on. We had tape and cameras set up everywhere and at every angle. We had it set up where he knew exactly what each pole was doing each jump, how it was reacting."

"The hardest part of the change was calling a guy who has provided us with good poles for eight years and tell him we were switching," said Rick.

Jenn said the main goal for this season is getting comfortable on these new poles, a process that has included changing her run to accommodate a faster stride, and changes to how she comes into the box and plants the pole.

"What we say after each meet is, 'We're just collecting data, knowing how high I can jump off of which poles,'" said Suhr, adding that she is about 70 per cent along in the process of figuring out the new poles.

What that will translate to in terms of results is anyone's guess at this point.

"Jenn has 14 US championships, more than any other athlete out there. She has 11 national records. She has a world indoor record. She has an Olympic gold medal. We can afford to mess up a season and take that chance. But can you imagine if she jumps better on them? I think that is what a lot of people are missing here. That would be something special."

For her part, Suhr has her eye on mastering the new poles in time for the 2016 Olympics in Rio.