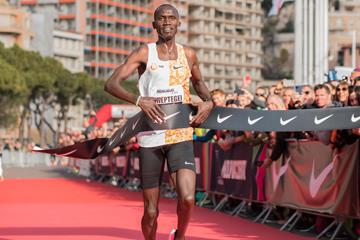 Cheptegei on his 2020 aspirations: ‘I want to go and make history’

“Everything starts in the mind,” says Joshua Cheptegei. “If you believe you can do this, then it’s possible.”

For a man who is re-defining the limits of human performance, it’s no surprise the Ugandan’s psychological strength is on par with his physiology.

Such statements may cause eyes to roll in an age where self-help advice is ubiquitous, but few back up their beliefs quite like Cheptegei.

Last weekend he smashed the world 5km record on the road when running 12:51 in Monaco. What’s left to do for the man who has (very nearly) done it all? We’re about to find out.

Eagerly-awaited half marathon debut in Gdynia

Next month, Cheptegei will try to become the first athlete in history to win consecutive world titles over cross country, 10,000m and half marathon. When he takes to the line in Gdynia, Poland, for the World Athletics Half Marathon Championships, it will be his first try at the distance.

Having made his name at the shorter distances, is there any apprehension at taking on the world’s best over 21.1km (13.1 miles)?

“For now I don’t have any,” says Cheptegei. “I just feel it’s an upgrade because I have been running 15km, 10 miles already, so it’s not far.”

He knows the pressure will be heaped on chief rival Geoffrey Kamworor, the Kenyan who has been peerless at the distance in recent years, winning the last three world titles and setting the world record in Copenhagen at 58:01.

“The goal was to prepare for a race where I am not having any pressure because I (have not run it) before, but of course I want to go for the victory.”

To prepare, Cheptegei has added more volume to his weekly training, which is typically 120-140km when preparing for track races. “Now I’m doing 150, 160,” he says. “It’s still not that big. But the half marathon is quite demanding in terms of endurance so we’re trying to work on that.”

His weekly staple is a 30-35km long run over rolling hills near Kapchorwa, a town in Eastern Uganda that sits at 1800m of altitude (5900ft). He trains there under the watchful eye of Addy Ruiter, a Dutch coach who has overseen his progress since 2015.

In his spare time, Cheptegei likes to play ludo with training partners and he is also an avid Manchester United fan, though his arc of progression in recent years has run in the opposite direction to his favourite team.

His manager – Jurrie van der Velden of Global Sports Communication – first spotted his talent in 2014 at the World University Cross Country Championships in Entebbe, Uganda, where Cheptegei cruised to victory in the men’s race. Later that year he added the 10,000m title at the World U20 Championships in Eugene, USA, and the following year Van der Velden brought Cheptegei to train alongside the greats in Kaptagat, Kenya, under renowned coach Patrick Sang.

But Cheptegei loved home and missed his family too much to train abroad all year, so Van der Velden and Ruiter set about building a world-class training group around him in Uganda.

In March 2017, Cheptegei hit the headlines for reasons he’d rather forget. He was only 20 at the time, and appeared on his way to a memorable gold in the World Cross Country Championships in Kampala, Uganda, holding a 12-second lead over eventual champion Geoffrey Kamworor with a lap to run.

But then his body shut down, Cheptegei forced to stutter through the final kilometre before eventually stumbling across the line in 30th. Such was his disappointment at losing gold on his home turf, he found it hard to leave his house for weeks.

How does he look back on it now?

“I don’t look back,” he says. “But it did really make me become what I am today. It made me strong.”

Two years later, he returned to the World Cross Country a far stronger athlete – mentally and physically. Cheptegei was one of the few elite athletes to travel to Aarhus long before the event, so on the weekend itself nothing about its absurdly steep inclines took him by surprise.

“It depends on the attitude of athletes,” he says. “If you feel like, ‘Wow, this is going to be a killer cross country’ then you will not (get) the best out of the competition, but I took it positively. I was (looking) to redeem myself from the previous edition.”

Cheptegei did just that, coming home four seconds clear of compatriot Jacob Kiplimo in a race where five Ugandans cracked the top 12. Why the current up-surge in his nation’s ability?

“I think a lot has been what we did on the development of athletics in Uganda,” he says. “It’s good coaching and good management, and the other factor is (more) opportunities for big races.”

In October, he again exhibited astute racing smarts at the World Championships in Doha, expending his energies with expert precision to out-gun Ethiopia’s Yomif Kejelcha and Kenya’s Rhonex Kipruto and win 10,000m gold in 26:48.36.

In what was a fast race from the outset, Cheptegei’s last lap was a blazing 55.39, his last kilometre 2:27.58. “I don’t work on (speed) too much but the longer you stay in the sport the more experience you get in racing and the more the speed comes,” he says.

He believes too many underrate the effect of psychology. “On a start line everybody is fit, then there is still something that separates the gold from the silver from the bronze,” he says. “It’s the attitude of never giving up.”

In December, Cheptegei lowered the world 10km record on the road to 26:38, which has since been rewritten again by Rhonex Kipruto, who clocked 26:24 in Valencia last month.

“Maybe sooner or later I can go for it again,” says Cheptegei, who appears equally as capable on the road as he is on track or cross country, the latter a surface he says he is “in love with”.

But on St. Valentine’s weekend, the roads staked a claim to his heart, Cheptegei ripping around the streets of Monaco with the metronomic magnificence of a Formula One car.

Watching his race back on YouTube, the impression you get is of an athlete completing a 12-minute, 51-second sprint – a graceful yet vicious gallop, his punchy stride stomping its supremacy from start to finish.

Olympic double on the horizon

That world record sent out a statement to his rivals that, as dominant as Cheptegei was in 2019, he will be more than ready for an Olympic encore. His chief target in Tokyo will be the 10,000m but he says he will “for sure” double back in the 5000m.

The 25-lap race will see him renew his rivalry with Mo Farah, who beat Cheptegei to 10,000m gold by less than half a second at the 2017 World Championships. But how does Cheptegei view the threat of Farah?

“For me it doesn’t change anything, but of course he’s the Olympic champion and it’s going to be really exciting to race against him. The last time we raced was the 2017 World Championships and a lot has changed from that time.”

Down the line, Cheptegei will eventually try the marathon and says he “can’t wait for the challenge”, but he has much left to accomplish before taking that step. He has already ruled the world on two surfaces and next month in Gdynia, he’ll see if he can reign supreme in a third and achieve something no one else has ever done.