When JuVaughn Harrison sprinted down the runway, launched into the air and broke the sand at 8.45m in round five of the long jump at the NCCA Indoor Championships in Fayetteville, Arkansas, few would have understood the significance of the achievement.

The 22-year-old Louisiana State University student had smashed his PB with a world-leading clearance. And, in little more than two hours, he had completed the rare high jump and long jump double, having earlier secured victory in the former event with a 2.30m clearance.

But perhaps the most significant accomplishment was not only completing the best ever one-day long jump/high jump double in history but becoming the first person in history to jump an 8.40m+ long jump and 2.30m high jump.

The fact he did so within such a short span of time and under the high pressure scenario of competing at the NCAA Indoor Championships made the accomplishment even more impressive.

Many great champions have of course excelled in more than one field event. History is littered with world-class long and triple jumpers while top-class shot and discus throwers are also not uncommon.

So why does Harrison believe he has managed to buck this trend and excel at the high jump and the long jump? He has a simple answer.

“The reason I think I’m so good at long jump and high jump is I put a lot of effort into both of them,” he explains. “As a jumper, having to compete in a horizontal jump and vertical jump is very challenging. It’s a tall task to stay sharp in both of them, but I know I’m capable of it and that’s what keeps me going. It takes a lot of dedication.”

Harrison was born and raised in the small city of Huntsville, Alabama, to Jamaican parents. His mother, Georgia Harrison, was a former hurdler at Alabama A&M and was inducted into the Alabama A&M Hall of Fame in 2014.

Sport was a huge part of Harrison’s life throughout childhood. He played competitive soccer and basketball but, given his family connections, it is little surprise Harrison’s true calling was athletics.

“Track is something that has always been in my family, so I grew up on the track,” he said. “I realised from elementary and middle school I was a little bit faster than everyone else but it was not until I got to high school that I started to flourish.”

During his high school years he impressed in both the long jump and high jump but also followed in his mother’s footsteps as a hurdler, competing over both the 110m and 300m distance.

There is little doubt the versatile Harrison was a supreme talent. As a Columbia High School student he claimed eight state titles – highlighted by the long jump, high jump, 110m hurdles and 300m hurdles quadruple in his senior year.

Not short of college options, Harrison, however, opted to study at LSU, where he was to specialise in long and high jump.

Harrison admits that a major drawcard was the coaching nous of jumps coach Todd Lane at what is historically one of the country’s most prominent track and field collegiate programmes.

“Todd reached out to me, he was very hands on and he showed that he cared about my progression in track,” says Harrison.

“Todd is a laid-back, fun coach. If you are being lazy, he will show you he really is the coach, but for the most part he is fun. He knows what he is talking about and can break down the events in a way that I can understand them.”

The outdoor season followed a similar theme. PBs of 2.22m and 7.84m were not backed up when it counted at the NCAA Championships as he placed a distant 13th in the high jump (2.08m) and 19th in the long jump (7.48m) in the premier collegiate competition of the year.

“I did not perform nearly as well as I wanted to in my freshman year,” he explains. “I was very hurt by my performance at nationals and felt I wanted to do a lot better. Looking back, I would say nerves and technical issues contributed to that.”

But Harrison, who back then went by the surname ‘Blake’, still had a chance of salvaging something meaningful from his season after earning selection to compete for the USA in the long and high jump at the World U20 Championships in Tampere, Finland. 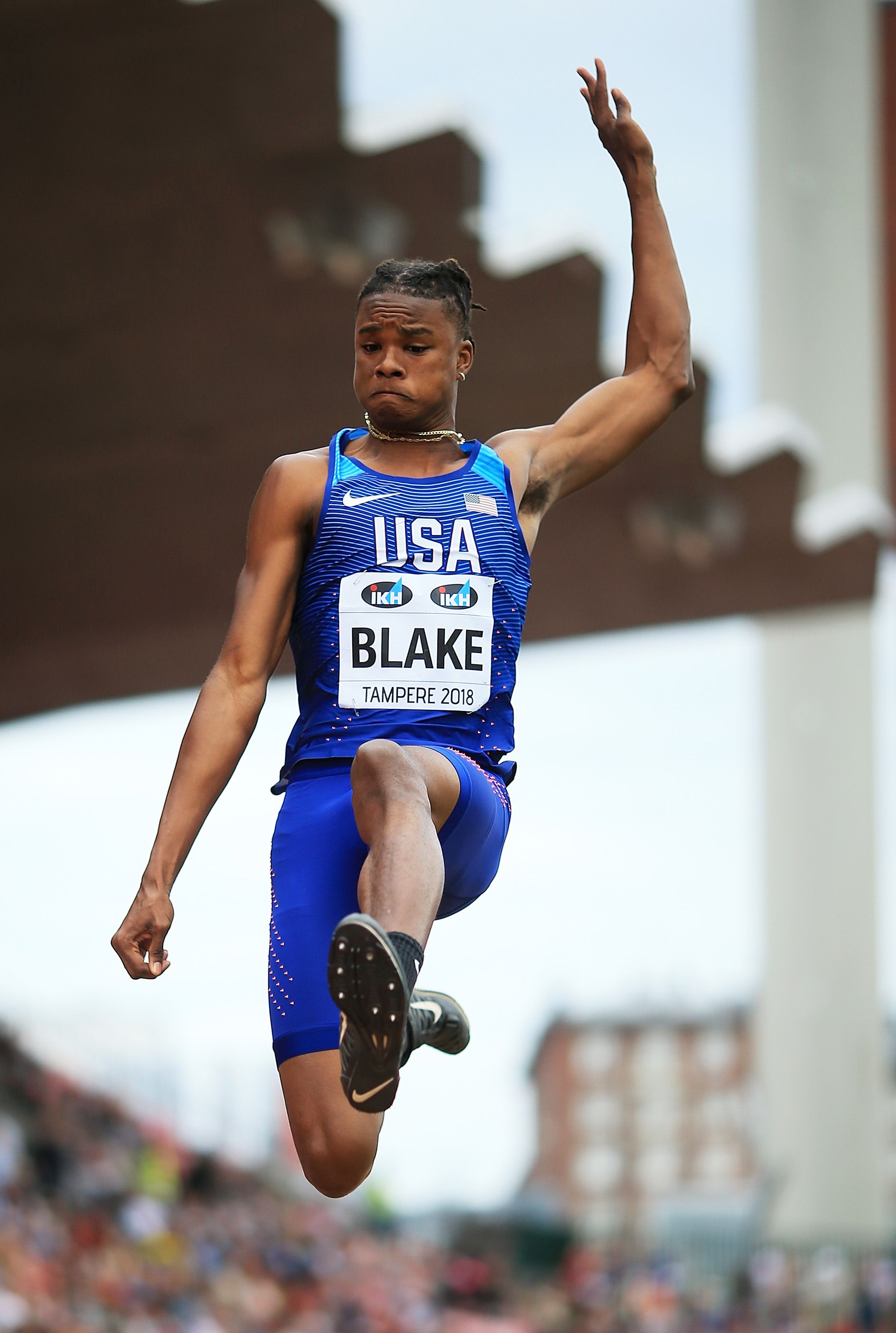 “I just kept telling myself, ‘I can’t have another repeat of nationals’,” he explains of his attitude leading into the World U20 Championships. “I worked on a lot of things in practise and I was able to get it done.”

Harrison opened up by placing a solid ninth in the long jump with 7.63m before delivering in the high jump to clear a PB of 2.23m and take a joint bronze medal – only missing out on gold on countback.

His performance inside the Tampere Stadium was a pivotal moment in his career and acted as a springboard for his future success.

“It really gave me my confidence back,” says Harrison. “To be able to go out and win not only a bronze but achieve the same height as the gold medallist at a global meet was a big accomplishment for me.” 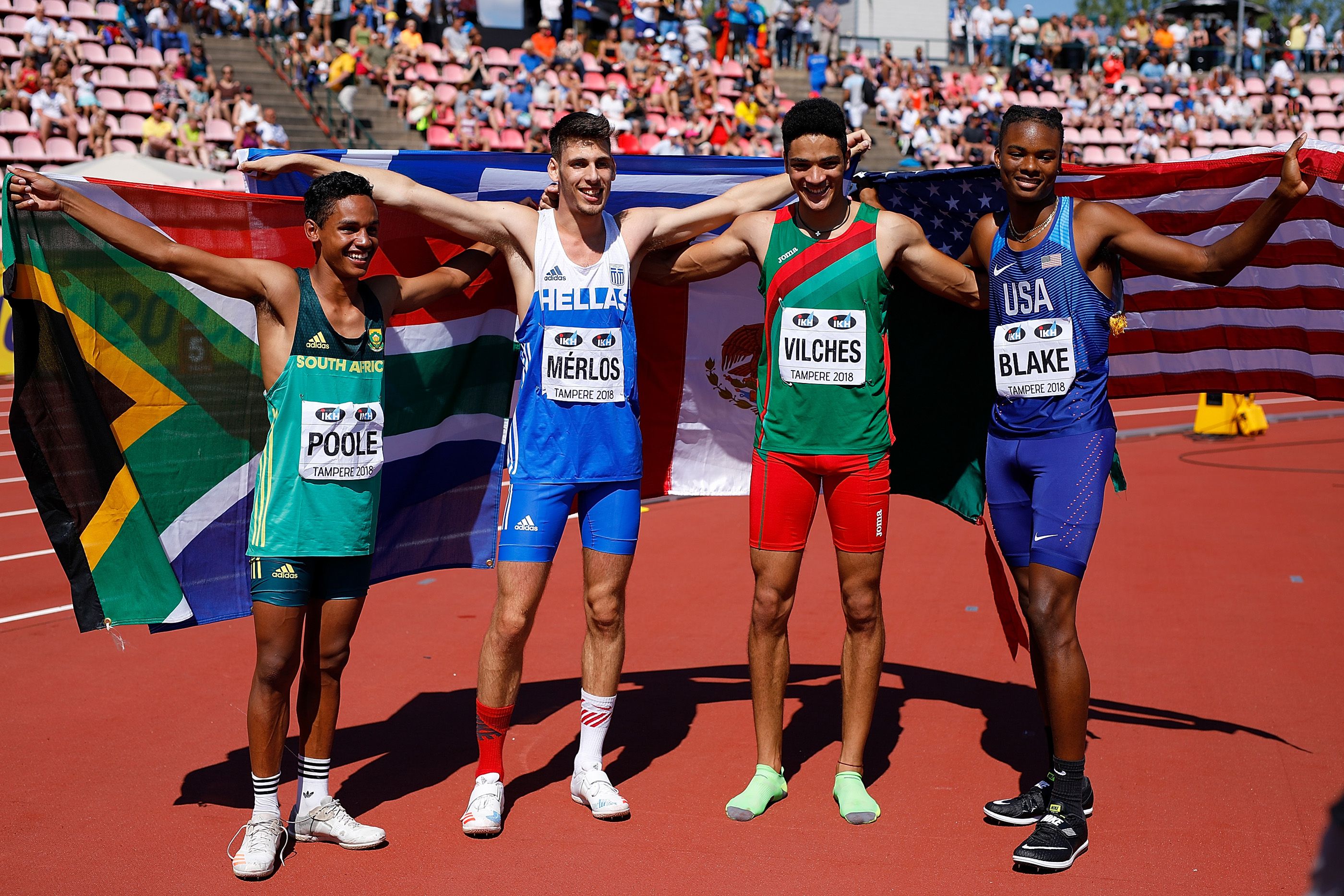 The meet was also a success for Sweden’s Mondo Duplantis – a flatmate of Harrison during his sophomore year at LSU – who struck pole vault gold with a championship record of 5.82m.

Since then, Duplantis has developed into a global athletics superstar, setting two world records and earning the 2020 Male World Athlete of the Year award.

It is a success Harrison has enjoyed watching unfold.

“Mondo is a laid-back guy who loves having fun,” he says. “I have been very proud and happy for him. I frequently talk to him and he sends me his congratulations. He said how proud he is of me and that I have bigger things to come.”

Confidence buoyed by his performance in Tampere, greater success followed for Harrison in 2019.

With more focus and training with greater intent, he soared to high jump victory at the Southeastern Conference Indoor Championships with a PB of 2.28m before winning NCAA indoor silver. Outdoors, he also moved to a new level, completing the NCAA high jump and long jump double with PBs of 2.27m and 8.20m.

For Harrison it was a sweet moment.

“It meant the world to me because my mom was there to watch me,” he says of his golden double in Austin, Texas. “I always put on a good show for my mom. She is my biggest role model. She has sacrificed so much to get me where I am today. I’m going to do my best to repay her.” 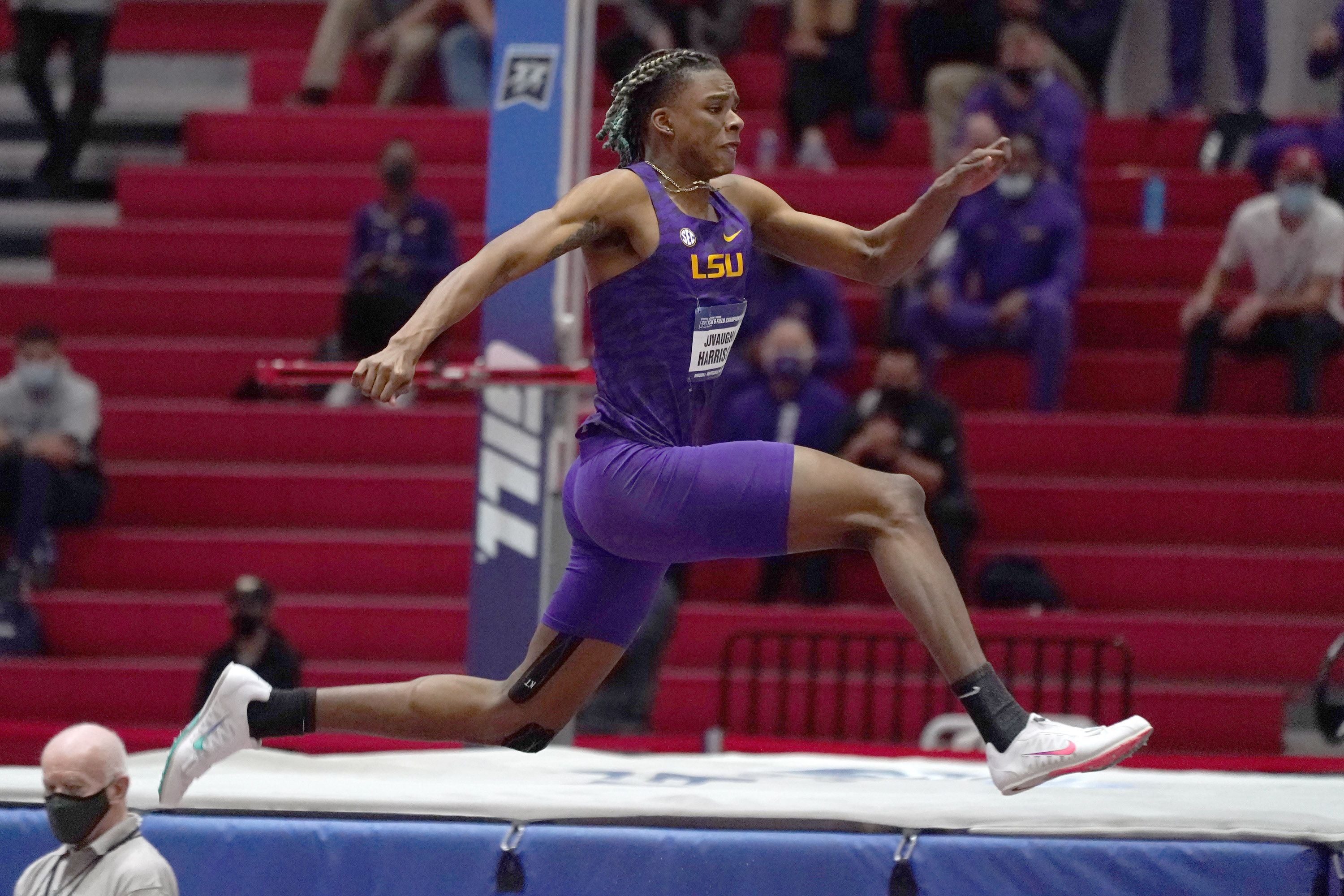 Last year Harrison set out to retain his NCAA titles and book a place on the US team for the Tokyo Olympics. The early signs were promising; during the indoor season he equalled his high jump PB of 2.28m and set an indoor long jump best of 8.11m. But then the global pandemic struck, bringing an abrupt end to his season.

The cancellation of competitions hurt, but Harrison continued to work on his fitness with teammates during lockdown. His all-round conditioning was enhanced thanks to hill workouts and mile runs. The competitive break also gave him time to overcome a few injury niggles, while the postponed Olympics has also worked in his favour.

“With the Games being pushed back, it gave me more time to train and get better,” he says. “I was thankful for it. It has given me more time to rest and recuperate the body.”

Yet training for long jump and high jump at the same time is not easy. The technical demands are quite different – a point Harrison is willing to concede.

“In the high jump you’ve got to plant your foot to go up and above the bar, whereas in the long jump you have got to go up and out. It is sometimes hard to correct that (training from one event to the other) but it is starting to become more of a habit. Sometimes I’ll slip up and I might pop off the board and go a little too high, but I’ll try to make the adjustments as quickly as possible.”

Now in prime shape following the work he did in lockdown, Harrison has continued to improve both technically and mentally. So far, 2021 has proved to be Harrison’s best season to date.

An equal high jump PB of 2.28m in January and a lifetime best of 8.33m in the long jump one month later hinted at what was to come. Then at the NCAA Indoor Championships in Fayetteville, Harrison created his slice of history with double gold.

He sailed to a six-centimetre victory in the high jump and was then forced to come from behind in a high-class long jump final, overhauling Isaac Grimes with a mighty fifth-round jump of 8.45m. 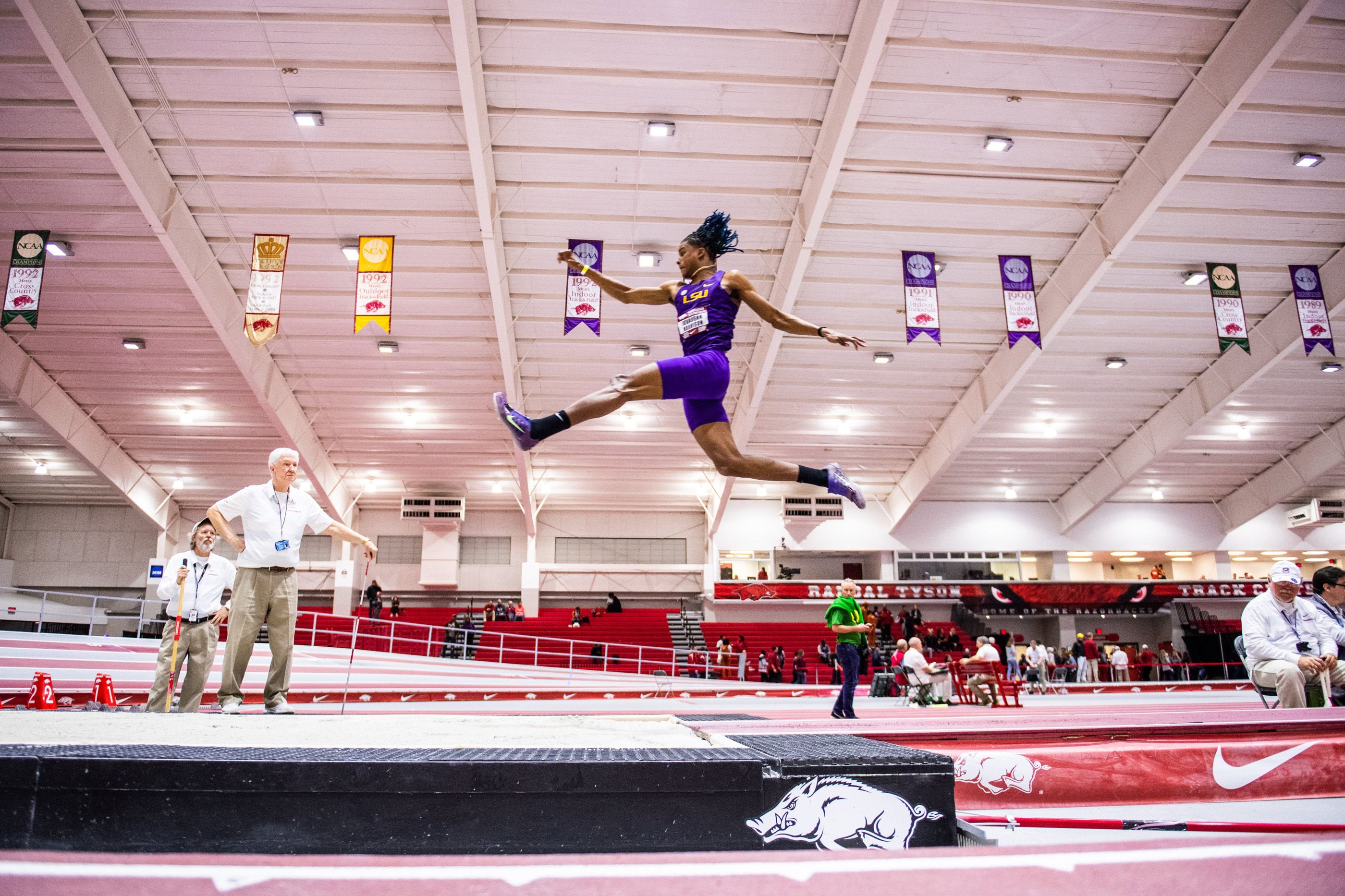 “It was a great feeling because I didn’t know (I was the first to achieve that feat) until after it happened,” says Harrison. “It was a great accomplishment for me. It really meant something.”

His outdoor campaign has started well, too. In just his second competition of the outdoor season, he set an outdoor long jump PB of 8.44m, then one week later cleared an outdoor high jump best of 2.30m.

Later this year he hopes to successfully defend his NCAA outdoor titles, achieve the Olympic qualification standard in the high jump (2.33m) and qualify for the US team for Tokyo.

Harrison fully intends to continue to compete in both disciplines, but does the man from Alabama – the state of birth of athletics icons Jesse Owens and Carl Lewis – have a preferred event?

“If you had asked me this question in my freshman or sophomore year, I would have said I liked the high jump more,” he says. “But today I love them both equally.

“When it comes to the high jump, there is something about that feeling of clearing the bar. In the long jump, I love that feeling of getting out of the sand, knowing you have jumped a long way.”

Given his staggering achievements so far, this remarkable young athlete looks set to jump higher and farther in the future. It could be quite the ride to observe. 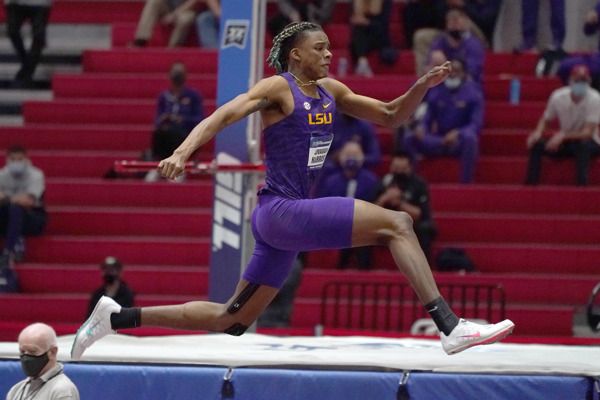