After world indoor bronze, Visser drifting towards life as a hurdler

You could call it the curse of the gifted, but to Nadine Visser it feels more like a blessing.

The Dutch athlete may be facing a tricky decision about her career trajectory, having won a surprise bronze medal in the 60m hurdles at the IAAF World Indoor Championships Birmingham 2018, but choosing between spreading her talent across seven events or channelling it into one is a luxury she’s happy to indulge.

It’s a dilemma few are accomplished enough to encounter, but that’s not to say she’s found an answer.

“Before this season I was already questioning my future, but after last year my coach decided we’d never do another indoor pentathlon,” said Visser. “It’s too hard for my body. When I did a jumping session I immediately felt it in my legs the days after. That’s why I’ve been sprinting and hurdling more.”

Heading into the indoor season, Visser had a best of 7.92 for the 60m hurdles – a world-class time, though not quick enough to get her on the podium in Birmingham. But as she was doing her final run-throughs ahead of the semi-final, her coach Bart Bennema saw something in his protegee.

“Bart said: ‘I've never seen you so well in the warm-up,’” Visser said, shortly after blitzing up the track and clocking 7.83 to win her semi-final, obliterating Marjan Olyslager’s Dutch record of 7.89 which had stood since 1989.

Suddenly, an expected clean sweep by the US trio – Kendra Harrison, Christina Manning and Sharika Nelvis – seemed under threat from the most unlikely of places, an athlete from the Netherlands who, for most of her career, had been training for seven events.

Growing up in Hoogkarspel, a village in the north of the Netherlands, sport was always deeply ingrained in Visser’s life. Both her mother and grandmother were athletes, though Visser first made her name in gymnastics, laying a foundation of elasticity that would prove invaluable in her athletics career.

“Where I lived I was good, but not at national level,” said Visser. “But at the age of 13 I was done with gymnastics and wanted something else.”

That led her to athletics, where she took after her mother in combining the high jump and sprinting. Her talent was obvious from the outset, and though Visser struggled with shin splints throughout her teenage years, at the age of 16 she won 100m hurdles gold at the European Youth Olympic Festival, clocking 13.28.

The following year she finished 11th in the heptathlon at the IAAF World Junior Championships in Barcelona, while two years after that, in 2014, she returned to the same event in Eugene, USA, and announced her talent to the world. Visser racked up 5948 points to take bronze in the heptathlon and later that week dipped below 13 seconds for the first time in the 100m hurdles final, clocking 12.99 to again finish third.

Back then, Visser knew she would eventually have to choose between the hurdles and heptathlon, but when she was so good at both it was understandable that she juggled the two.

Training alongside Dafne Schippers, she witnessed her successful transformation from heptathlete to sprinter, but for Visser it wasn’t so straightforward. “Dafne was outstanding in the sprints,” she said, “but I’m in a different event.”

After a breakthrough year in 2015, when she lowered her hurdles best to 12.81 and raised her heptathlon PB to 6467 points, Visser seemed ready for a big showing at the 2016 Olympics, but the injury problems soon came back to haunt her.

She missed the European Championships in Amsterdam and went to Rio a shadow of her former self, scoring 6190 points to finish 19th in the heptathlon. “From a young age I was always suffering with my shins, but in 2016 I had an injury for a long time, which was really disappointing,” she said.

Her coach, Bart Bennema, nursed her back to full fitness in the year that followed, and Visser is quick to praise the 40-year-old, who also guided her countrywoman Schippers for many years until her 200m world title in 2015.

“Sometimes he’s too sweet and I need him to shout at me to make me work,” says Visser with a laugh. “But he always makes sure I’m at my best in the right moments.”

On the build-up to Birmingham, Bennema spoke openly of his belief that Visser can’t maintain her plate-spinning act for much longer.

“The combination of all-around and hurdles is no longer possible,” he told Dutch newspaper de Volksgrant. “She has to ask herself the question: ‘what makes you happy and where do you want to spend your time in the next eight years?’ If she does not, I'll do it for her. Continuing to train [for the heptathlon] hinders her development in the hurdles. When we train on the jumping parts, her lower leg needs a day to recover.”

That was the case in recent months for Visser, who felt almost immediate pain each time she tried a jumping session, leading to her decision to focus only on hurdles indoors before re-assessing ahead of the summer.

Visser arrived at Arena Birmingham knowing she was in good form, but did she really believe a medal was possible?

“Not really, I just wanted to make the final,” she admitted. “But when I ran 7.83 in the semi-final and saw the Americans weren’t running the fast times they did before, I knew if I just did my thing I had a chance.”

When the gun fired in the final, Visser got a flying start to the first barrier but soon lost ground to shorter, slicker hurdlers like Manning and Harrison. She was no better than fourth at halfway, but from there she was foot-perfect, unlike Sharika Nelvis to her left, who clipped the last barrier.

That cost the American precious time, and as Harrison took gold in 7.70, with Manning securing silver in 7.79, Visser bounded to the line to grab bronze in 7.84, just ahead of Nelvis’s 7.86.

“I’m so happy that I can’t believe it,” she said afterwards. “I got a little injury early in the season and after that I was searching for the right feeling, which was frustrating, but today was the first day that I got the feeling back.”

It was Visser’s first senior medal at a global championships, but unlikely to be her last. The only question now is whether it will signal a change of direction.

She’s certainly good enough to succeed in either, but what governs her choice may be her attitude towards the day-to-day grind.

“It’s less workouts now, but the workouts are longer,” she said. “I enjoy training for hurdles much more than others.”

This outdoor season, her focus has been directed towards the hurdles with an eye on another medal at the European Championships in August. Less than two months into her outdoor campaign, her progress has already continued. After a relatively sluggish debut in Doha where she clocked 12.94 for seventh, she improved to 12.81 in Shanghai. After a fourth place finish in Rome and third in Hengelo, she broke the national record in Stockholm, finishing fourth in 12.71. 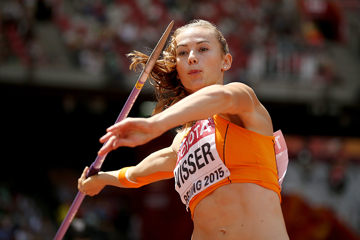 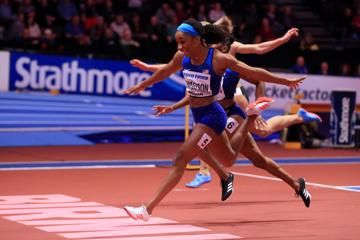