While the one-hour record may be viewed by some as one of the more unorthodox world records, it holds a rich history spanning more than a century and boasts an outstanding cast of athletes to have had a claim on the mark, including endurance icons Paavo Nurmi, Emil Zatopek, Ron Clarke and more latterly Gebrselassie, the two-time Olympic gold medallist.

First record dates back to 1904

The genesis of the record can be traced back to 1904 when Alfred Shrubb became the event’s first official world record holder. The diminutive Englishman was the finest distance runner of his generation, posting 28 world records over distances from 2000m to the one hour.

Yet one of his finest achievements came in November 1904 at Ibrox Park in Glasgow when - while competing in “a violent breeze and sodden track” - he posted the first official one-hour record of 18,742m and en route also set world records for six, seven, eight, nine, 10 and 11 miles.

The mark was to survive for nine years until 1912 Olympic 5000m silver medallist Jean Bouin plundered the record for France. Competing in Stockholm, Bouin covered 19,021m in 60 minutes, although the following year his life came to an premature end when he was tragically killed in action during the First World War.

Nurmi and Zatopek turn their turns

Bouin’s world record was to remain intact for 15 years until one of the greatest distance runners in history, Paavo Nurmi, secured the record in Berlin in 1928. Just two months earlier, the 'Flying Finn' had snared his ninth and final Olympic gold medal over 10,000m at the Amsterdam Games and he followed this up by pushing the world one-hour record out to 19,210m in the German capital.

Nurmi was succeeded as the record holder by fellow Finn Viljo Heino. In 1945 Heino, the world record-holder for the 10,000m, added the one-hour record to his collection, covering 19,339m in Turku.

The ownership of the record was to fall to another of the all-time legends in 1951 when four-time Olympic champion Emil Zatopek set two world one-hour records in 14 days. 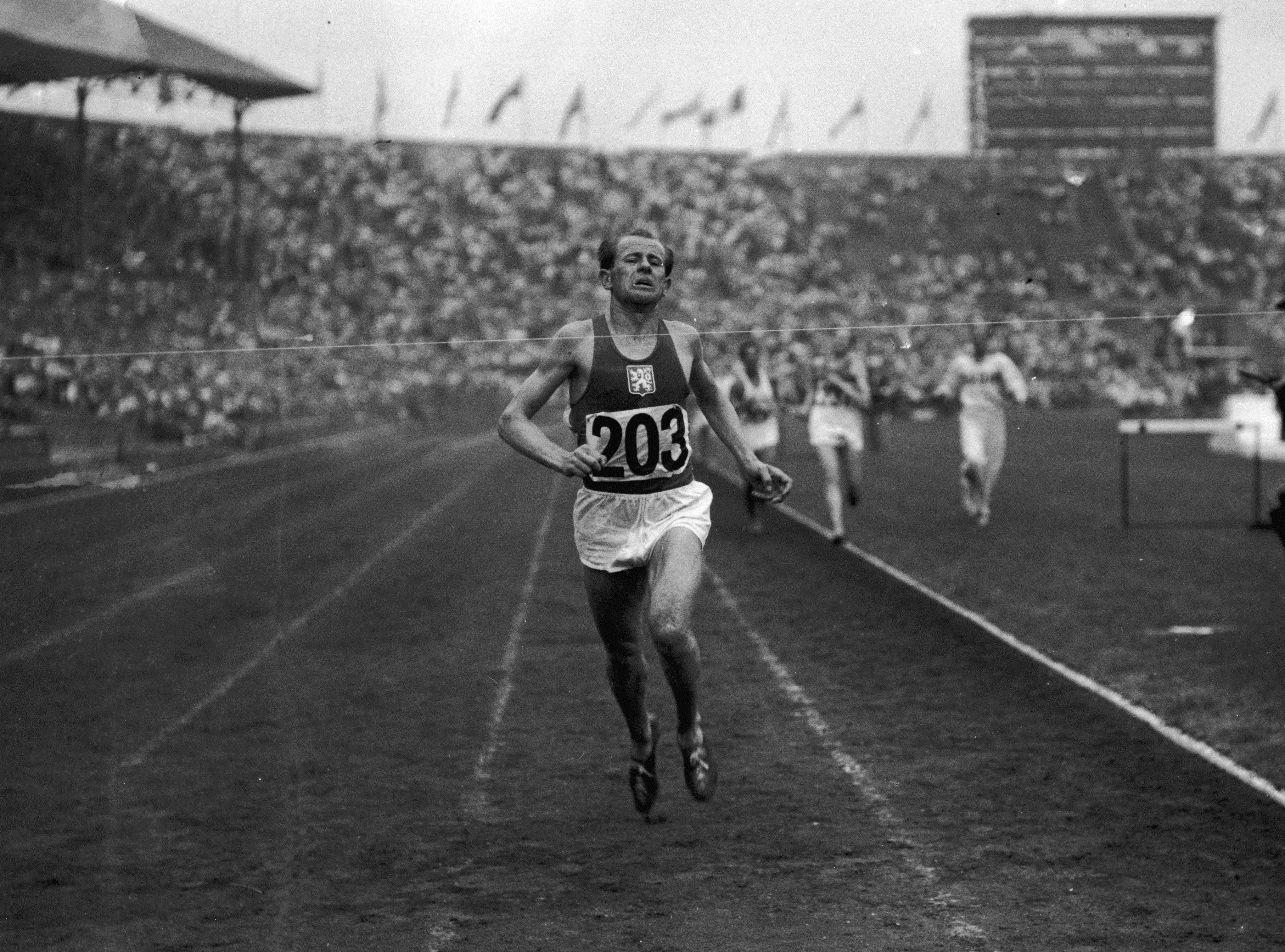 The Czech legend, who in 1952 became the only man in history to win 5000m, 10,000m and marathon gold at the same Olympics, proudly held the mark for 12 years until Bill Baillie of New Zealand became the first non-European to take the record.

Baillie and Clarke take the record to Oceania

Baillie, who went on to finish sixth in the 5000m at the 1964 Tokyo Olympics, was part of a group of world-class Kiwis thriving under the pioneering coaching of Arthur Lydiard and achieved one of the greatest moments of his career by completing 20,190m in Auckland in one hour.

Two years later the record moved west across the Tasman Sea as Australian distance running legend Ron Clarke seized the mark. Clarke set a prodigious 17 world records in his career and added the one-hour mark to his dazzling array of global records, completing 20,232m in Geelong. 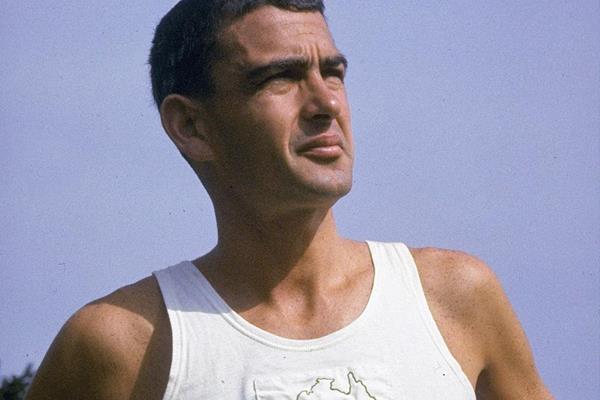 However, one year and one day later the record returned to Europe as 1964 Olympic steeplechase champion Gaston Roelants, added more than 400m on to the record.

The versatile Belgian, who was also a four-time winner of the International Cross Country Championship, covered an impressive 20,664m in his home city of Leuven.

Yet this was not the end of the Belgian great’s world one-hour journey. In 1972 and now 35, Roelants extended the world record mark to 20,784m with a memorable performance in Brussels.

Hermens and Born to Run

In 1975 it was the turn of rising Dutch distance runner Jos Hermens to target the record. Hermens had shown a rapid improvement since adopting the training model of Lydiard some three years earlier and in 1975 he was in the best form of his life.

Running a gruelling 200 miles a week – which sometimes entailed training four times a day – Baillie had obliterated his 10,000m PB by more than 30 seconds in London in August with a 27:46.52 run – a performance which gave him the belief he could attack the world one-hour record.

“Back then the world one-hour record was very popular in both athletics and cycling,” explains Hermens. “Gaston Roelants was a big example for me, he was the world record holder and as I was an athlete suited to running the longer distances I looked to the one-hour record. I knew to break the world record I needed to run two halves of 10km at something like 28:40 – which I knew was in range for me because my mileage was so high.”

Coming off the back of his breakthrough run in London, Hermens attempted the world one-hour record in Papendal – the only synthetic track in Holland at that time – in mid-September.

Hermens, the founder and director of Global Sport Communication, has long been considered as one of the sport’s great innovators and when attempting the record he sought a novel approach.

“In 1975 Bruce Springsteen released Born to Run,” says Hermens. “I was a big fan of rock music, so we set up our own sound system at the track and I put together a play list which began with easy, slow tunes and ended with Springsteen’s Born to Run.”

In this way the Dutchman could be inspired by the music and distracted from the pain of the record attempt.

Hermens missed out for a matter of metres on Roelants’ time but two weeks later returned to Papendal to claim the record with a distance of 20,907m. Later that year he was crowned Dutch Sportsman of the Year.

“To run around 52 laps on a track takes great concentration and focus,” said Hermens, who was paced to the record by fellow Dutchman Gerard Tebroke. “I think it is probably easier to run that distance on the road than the track. The first 45 minutes feels okay but that final 15 minutes is really tough.”

To aid his preparation for the 1976 Montreal Olympics, Hermens targeted the one-hour record once more in Papendal in May of that year.

Spending two months preparing by training in New Zealand and enlisting the help of exercise physiologist Jan Vos he once again employed an innovative approach.

To help his pacing he came up with the smart idea to place a police light at each 200m mark – which would flash every 34 seconds or so – on what was the precise world record pace.

“This would tell me during the race without having to worry about watches and time splits whether I was on schedule,” he explains. “I guess it was the first form of Wavelight technology.” Hermens came up with the Wavelight concept in which flashing lights are fitted to track rail to aid athlete pacing as seen at Diamond League meets in Oslo and Monaco this year.

Using the lights as a guide and listening once more to his motivational tunes, Hermens completed the distance in 20,944m to better his world record.

He had privately hoped to become the first person in history to run 21,000m in one-hour but a second world record was still a big boost on his journey to the Olympics later that year.

“It was nice to break the record and it showed I was continuing to improve,” he adds. “It was another step on my road to marathon running.”

While injury was to ruin his plans for marathon success – his world record would survive a further 15 years until Mexico’s Arturo Barrios took it down in 1991. The World 10,000m record holder was a tough-as-teak performer and in Le Fleche, France, he achieved a total distance of 21.101km.

In 2007 Ethiopian great and two-time Olympic 10,000m champion Haile Gebrselassie rolled back the years and become the 11th and most recent one-hour standard bearer.

Five years earlier, Gebrselassie had attempted the mark in Hengelo only for a calf injury to force him off the track 39 minutes into the run.

But in Ostrava’s Mestsky Stadium, in what was his second crack at the record, the 34-year-old comfortably delivered achieving a distance of 21,285m. 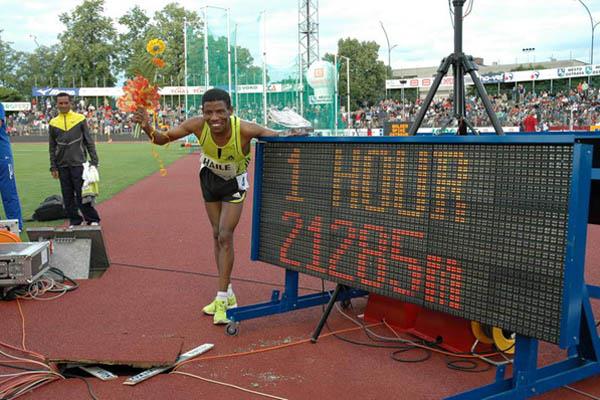 “I was a little bit worried about the wind and the temperature because it was very hot that day,” recalls Gebrselassie to World Athletics. “But the record was not super-fast, so I knew I was capable.”

Adding his 23rd and 24th world records of his career that day in Ostrava (he also took the 20km world record in 56:25.98) – the two marks remain Gebrselassie’s last remaining world records.

However, on Friday he fully expects his name to be erased as existing world one-hour record holder.

“The record, I think is not so difficult,” explains Gebrselassie. “I think Mo wants the record and he will get it.”

If the 37-year Briton does achieve his goal in Brussels, then he will add his name to a very distinguished list of athletes.