Not many championship gold medals are won wearing a mock Viking’s helmet, replete with pigtails.

There again, there are not many like Perseus Karlström.

Such is the Swede's effervescent character, he even had presence of mind to make sure the helmet was in national colour blue and yellow.

Karlström looked very much the man of the moment when winning the men’s 20km at the European Race Walking Cup in Alytus last month.

There’s a certain calm; a look, a focus if you like, from those about to triumph.

The women’s race winner had it too. Živile Vaiciukeviciute was head down, but that head was still while all around were clenched fists and oxygen debt.

Karlström was likewise inscrutable behind shades and a white cap most of the race. Undeterred by Briton Tom Bosworth’s early break alongside defending champion Christopher Linke, Karlström and a select group of four paid out just enough rope to allow the pacemakers to hang themselves, and then pushed the final two kilometres.

Karlström reeled off two-kilometre splits of between 8:06, and 7:47 – the last three segments a mere two seconds apart before coming home in 1:19:54.

You need a cool brain and oodles of self-belief to set out a race plan and stick to it. The man who celebrated his 29th birthday 17 days before his Alytus triumph thinks this is his time, and with good reason.

“Three weeks ago I knew I was going to win in Alytus,” he said. “The times I was clocking, no one can beat them. I have had my best training sessions, and also did my best altitude work in Mexico. I was in Mexico for two months and I came back just 10 days before the European Cup.”

He maintained an unbeaten start to the year with a notable 1:23:40 victory in Lazaro Cardenas in Mexico on 20 April.

Notable, because the fifth leg of the IAAF Race Walking Challenge was the first time a European breasted the tape in the 17-year history of the race.

This time a set of even splits were augmented with a defining 7:43 during the penultimate two kilometres.

Before that, he led the 2019 European list with 1:20:05 set in Adelaide in February, also the first leg of the IAAF Race Walking Challenge. At the time it was his second best time and his fastest since 2016.

The national 5000m record was decimated with 18:32.56 in March – with all three races crucially in Australia.

His Facebook page lists him as living in Eskilstuna, Sweden, but during the northern hemisphere’s winter he couldn’t be much further away.

Karlström has enjoyed a string of stays at the Australian Institute of Sport in Canberra, and even has an Australian coach: Brent Vallance.

He joked after the European Cup that the 12,000-mile trip on a regular basis was because he “didn’t like fighting icebergs”.

He added: “I love Australia. There are fantastic summers there. And have you ever been to Sweden? From November to March you cannot walk outside in any way, never mind race walk.”

Karlström believes the near legendary Vallance deserves an equal share of the limelight.

“We have worked on a different training approach,” explained the Swede.

“It’s now a better, more systematic way of training, with more mileage regularly, and a better work load. And, very importantly, better recovery and fatigue management, which has made a lot of difference.”

Karlström is not short of training partners in Canberra. In fact, such is the welter of riches, the group is added to and subtracted from, depending on the session.

“In January, I was in Canberra, and then Melbourne between February and March," he said.

“I did short, speed sessions with the boys, New Zealand’s Quentin Rew, Kyle Swan, Rhydian Cowley, and for distances, we also train with the girls too – the likes of (Commonwealth gold medallist) Jemima Montag, and (European Championships fourth-place finisher) Brigita Virbalyte.”

No stone is being left unturned for Karlström as he bids to add a World Championships medal to his haul.

Dedication to the task demanded he even shun his family in the week leading up to Alytus.

“I have been avoiding people, including my family, because they had a cold, and I was so worried at the beginning of the week leading to Alytus. I need to stay healthy.”

But there’s one member of his family he won’t be able to avoid at the IAAF World Athletics Championships Doha 2019. His brother, Ato Ibanez, recently clocked a qualifying time of 3:56:22 over 50km.

The brothers are part of a strong race walking dynasty. Their father, Enrique Vera, won a silver medal for Mexico at the 1976 World Championships in Malmo which were staged by the IAAF after the International Olympic Committee controversially dropped the men’s 50km from the Montreal 1976 Olympic programme. Their mother, Siw, took the 10km race walk bronze medal at the 1986 European Championships.

Karlström holds every Swedish race walking record, except for the 1:18:35.2 recorded by Stefan Johansson for 20,000m on the track in 1992. His latest national record came in La Coruna last weekend, where he reduced his 20km best to 1:18:07, putting him eighth on this year’s world list.

But the Swede is clearly in the form of his life and plans to use his racing cool to good effect in the desert heat.

The blue and yellow Viking helmet may well make a reappearance in Doha.

BACK
Pages related to this articleAthletes
Perseus KARLSTRÖM 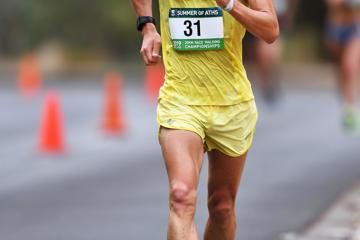 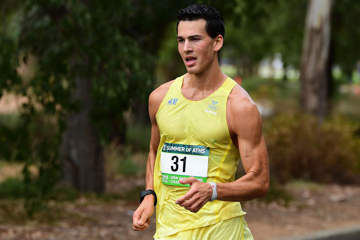