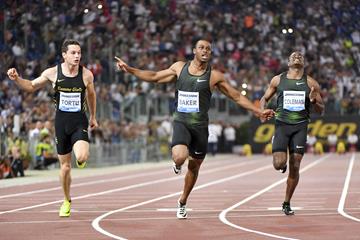 After back-to-back high profile victories, Baker is beginning to cook up a storm

Last year US sprinter Ronnie Baker gave Spikes Magazine tips on a wide range of topics, including cooking. His advice was to make sure you have “all the ingredients” before you start. “That is to make sure you prep everything before you cook to make the process run as smoothly as possible.”

As this amiable 24-year-old from Kentucky starts to add a series of impressive outdoor victories to his indoor achievements, it begins to look like an apt analogy for his career – for Baker is cooking up a storm.

His 100m victory in Thursday’s IAAF Diamond League meeting in Rome, where he clocked a legal personal best of 9.93 to move top of the 2018 world lists, represents the high point so far of a career that is heading steadily to the heights.

Just five days after winning at the Eugene Diamond League in a wind-assisted 9.78, this former cross-country and 400m runner delivered once again in front of a 30,000 crowd which, he admitted to TV interviewers afterwards, he had found a little daunting.

Nature abhors a vacuum, and in the absence of the sprinting phenomenon that was Usain Bolt, there is a space at the top of world sprinting that urgently needs to be filled.

For now there is no clear successor to the great and recently retired Jamaican. But while his 22-year-old US compatriot Christian Coleman has staked a claim by taking world silver last summer and adding a world indoor title and world record over 60m this year, Baker – quiet, polite, religious and hugely competitive – is putting together his own cogent credentials.

One of Baker’s main ambitions last year, his first as a professional, was to qualify for the IAAF World Championships, not least so he could race against Bolt before he retired. That didn’t happen for him. Instead it was Coleman who ended up on the podium between bronze medallist Bolt and the 36-year-old American Justin Gatlin who took gold, and who is still very much part of the sprinting scene.

Others, such as Canada’s 23-year-old Andre De Grasse, prevented by untimely injury from following up on his Olympic 200m silver and 100m at last year’s World Championships, will doubtless have their say soon enough.

But Baker’s talent – as he would insist, God-given talent - is shining more clearly each day. Having won the NCAA 60m title for Texas Christian University in 2015 and 2016, he followed Coleman home in his world-record victory at this year’s US Indoor Trials, clocking an impressive personal best of 6.40 behind the smaller athlete’s 6.34. And he took bronze behind Coleman’s gold In March at the IAAF World Indoor Championships in Birmingham.

On the eve of their race in Rome, as they had sat alongside each other at the main meeting press conference, Baker and Coleman were asked, a touch playfully, to describe what they most loved – and hated – about each other.

Baker it was who asserted himself first. “I’ll start with what I love, and end with what I love…I don’t really hate anything about Christian, I have the utmost respect for him.

“Last week in Eugene that race could have gone either way, and both of us know that. The biggest thing is that it’s always going to be competitive. He’s not going out there to be second, and neither am I. We definitely have respect for each other’s talent.”

Coleman returned the compliments as he described his rival. “He’s really competitive, he works hard to get on top of his game. That’s what I love about the sport. He is pushing the sport forward. I love competing against him – I respect his game and what he does, he makes me work hard every single day. I’m looking forwards to racing him tomorrow and many times in the future, for sure.”

Earlier, Baker had been asked to offer some biographical detail to the assembled media by means of a very direct question: “Who is Ronnie Baker?”

“When I first started at school I ran a lot of cross country, but that was a long time ago,” he said with a grin. “Moving on, I ran track in middle school and high school in Kentucky, where I was born. I ran 400s, and then moved to 100 and 200 by the time I was studying at TCU (Texas Christian University).

“I went professional last year after finishing third at this meet. I got to see the Colosseum, I got to see a lot of things. It’s been a great experience being able to travel the world.

One other question related to his familial link with the 2007 IAAF World 100 and 200m champion Tyson Gay.

“Tyson Gay is a very distant relative of mine,” Baker replied. “I only found out about it a couple of years ago, so I didn’t have contact with him until then. As for whether I talk to him on a regular basis – it doesn’t really happen. I see him once in a while and it’s cool that he’s my distant relative.”

It was pointed out to the two sprinters that they were occupying positions as the main sprinters at the Rome meeting that had previously been occupied by runners such as Bolt, Gatlin and Gay – as a precursor to the question of who they had looked up to when they were learning their trade.

“I looked up to Bolt,” Baker said. “He’s an icon in the sport, he’s done everything. Before that I was a huge fan of Tyson Gay before I knew he was a distant relative. I didn’t start in the 100 on the track, I was a 400m guy for the longest. College was where I started doing more 100s and 200s, so I looked up to Michael Johnson as well.

“But just to be in the conversation now is incredible. Now I know I need to continue to work hard to leave my own legacy. Maybe in a few years’ time maybe some of you will be saying – ‘Ronnie Baker was once sitting in that seat.’”

A little over 24 hours later, Baker was reflecting upon another significant addition to his own personal athletics legacy.

“Today was definitely a confidence booster,” he said after his Olympic stadium race. “To have two wins in two races under my belt is great but I know I have to keep working hard. The things I'm doing in practice are going well and I’m sure there is more to come.”

One thing he needs to adjust immediately?

“It was my first victory lap and I need to work on doing it faster next time.” Given the achievement, a lifetime best and a world-leading performance, we can let it slide, this time.

“I was third here last year so to win is super exciting and to run a PR is amazing for me. It's really exciting that things are starting to click together.”

Baker races next at the US championships in two weeks.

Baker, who is still coached by the man who guided him at TCU, Darryl Anderson, warmed to much the same theme after his Eugene race, as he told Track and Field News:

“My goal this year is to win every race, every time I come to the line. There’s not really a time in mind that will be anything I’m shooting for as far as that goes. But I just want to win every, single race. That will be my goal.”

If Baker manages to achieve that goal this season the ingredients will be in place for some cordon bleu achievements over the next few years.