Qatar’s Abderrahman Samba produced a superbly judged performance in the 400m hurdles to highlight the action on the track at the Golden Gala Pietro Mennea in Rome, the fourth leg of the 2018 IAAF Diamond League, on Thursday (31).

Samba overtook world champion Karsten Warholm over the final flight of barriers before winning in a Diamond League and Asian record of 47.48. It was also a meeting record.

Warholm’s bold effort earned him his first sub-48 race as he took 0.40 off his Norwegian record, clocking 47.82.

In what was his season’s debut the Norwegian, running in lane seven, stuck to his classic race model of charging out fast to try and break the field.

As he arrived in the final straight it seemed as if he might have managed it, but the taller figure of Samba – born in the northwest African state of Mauritania – came through smoothly in lane four, surpassing the time of 47.57, clocked at the home Diamond League meeting Doha, with which he already topped the 2018 world lists.

“It’s a big feeling for me to break not only my personal best, but also the Asian record, the national record and the Diamond League record,” Samba said. “I now hope every race will be like this.

“I say thank you to my rivals for pushing me. I told Karsten thank-you especially. We are now giving the 400m hurdles the attention it deserves.”

Warholm, who had concluded his indoor season in February by breaking the world outdoor 300m hurdles best in Tampere, looked understandably shattered at the end following this defeat by a fellow 22-year-old – but it was another huge stride forwards for him.

Home idol Filippo Tortu produced a performance to make a 30,000 Rome crowd proud in the Olympic stadium as he took third place in a 100m race won by Ronnie Baker of the United States in a legal personal best of 9.93 – the fastest this season outside performances with an excessive following wind.

Realistically, the Italian supporters had been hoping their 19-year-old rising star - who had lowered his 100m best to 10.03 the previous week - could beat the 39-year-old national record of 10.01 set in the thin air of Mexico by the sprinter after whom this annual Golden Gala meeting is named, Pietro Mennea.

Tortu’s powerful finish, as he passed world silver medallist and 60m world indoor record holder Christian Coleman in the final strides, raised home hopes – but a sigh went out when the name of France’s Jimmy Vicaut came up on the scoreboard with a time of 10.02, with the taller Italian’s name soon arriving below with a time of 10.04.

“I am really satisfied,” said Tortu, who was among a group of athletes who had an audience with Pope Francis in the Vatican on Wednesday. “I will only be able to tell you when I can run sub 10 at the moment I achieve it! Meeting the Pope this week was an experience that was more important than any race.”

Coleman, fifth in 10.06, appeared to be slowing slightly at the line and grimacing as if all was not well. South Africa’s Commonwealth champion Akine Simbine finished one place behind in 10.13.

For Baker, who beat Coleman in last Saturday’s race at the Eugene Diamond League meeting in a time of 9.78, with a following wind of 2.4mps, this was another significant marker in the struggle for sprint supremacy in the post-Bolt world.

“Today was definitely a confidence booster,” said Baker. “To have two wins in two races under my belt is great but I know I have to keep working hard.”

The next race on the track – the women’s 3000m steeplechase – was equally stirring as world champion Emma Coburn, who had led narrowly at the bell, stumbled and fell as she took the final water jump flanked by Kenyan rivals Celliphine Chespol and 2015 world champion Hyvin Kiyeng.

Kiyeng proceeded to win in a meeting record and 2018 fastest time of 9:04.96, with the 19-year-old prodigy Chespol, who had had to chart a quick route around her fallen opponent, second in a season’s best of 9:05.14.

The gutsy American picked herself back up and drove on, but was passed by another Kenyan, Norah Jeruto, who was third in 9:07.17 with a shaken Coburn finishing fourth in 9:08.13 – both the latter times also being season’s bests.

Another 800m win for quick-kicking Kinyamal

The men’s 800m race was also a compelling one as Kenya’s Jonathan Kitilit, a clear leader at 500m as the pacemaker Bram Som moved over after taking the field through 400m in 51.24, pushed on strongly with a strung-out field appearing to struggle in his wake.

However, his compatriot Wyclife Kinyamal was a keen and powerful hunter, and as the race moved into the final ten metres the 20-year-old Commonwealth champion had his prey, moving past to win in 1:44.65, with Kitilit having to settle for third in 144.78 as a third Kenyan, Ferguson Rotich, came through in 1:44.74.

Another Diamond League victory for Wyclife Kinyamal, this time in Rome

It was almost an exact replica of the finish that had played out earlier this month in the Shanghai Diamond League, when Kinyamal had come through in the final 20m to win by 0.04sec before declaring memorably: “We were fighting for the last 100 metres, but I was stronger and I knew it. I come from the same village as Rudisha, he was always my example. Now I take over.”

Kinyamal is certainly ticking all the boxes right now…

The men’s 1500m saw Kenya’s world silver medallist Timothy Cheruiyot, winner of the Shanghai Diamond League 1500m and the Bowerman Mile at the Eugene Diamond League, maintain bragging rights as he won in 3:31.22, the fastest of the season so far.

The 22-year-old Cheruiyot finished well clear of his training partner Elijah Manangoi, who took gold to his silver in London last summer and finished here in a season’s best of 3:33.79.

Kenya’s world and Olympic 3000m steeplechase champion Conseslus Kipruto, surprisingly beaten by compatriot Benjamin Kigen at the Eugene Diamond League last Saturday, made sure it didn’t happen again in what was a non-Diamond League race, although it was a close run thing.

Kipruto pulled clear on the final lap to win in 8min 04.40sec, the fastest run so far this year, but Kigen maintained his rising reputation as he took second place in 8:10.01 despite a stumble at the last hurdle after which he looked briefly behind him before resuming his forward momentum.

Sharika Nelvis of the United States, complete with mauve lipstick, earned victory in the women’s hurdles in 12.76 ahead of Jamaica’s 2015 world champion Danielle Williams, who clocked 12.82, and Tobi Amusan of Nigeria, who recorded 12.86.

Marie-Josee Ta Lou, the world 100 and 200m silver medallist, was a convincing and expected winner in the longer distance as she got out fast and held a clear lead before finishing in a season’s best of 22.49.

The Ivorian sprinter is thus getting into convincing winning mode this season, having defeated the Olympic, world and world indoor champions over 100m at the Eugene Diamond League race last Saturday.

Georganne Moline of the United States won the women’s 400m hurdles – not scoring for the Diamond League on the night – in a season’s best of 53.97 from Jamaica’s Janieve Russell, who clocked 54.08, with Moline’s compatriot, the Rio 2016 champion Dalilah Muhammad third in 54.65. 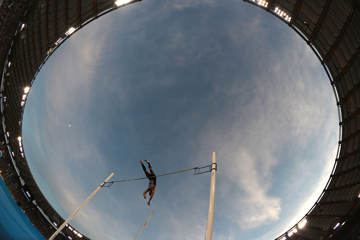 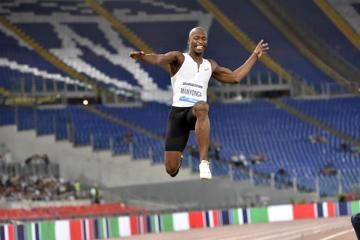 World leads for Manyonga and Lasitskene top i...