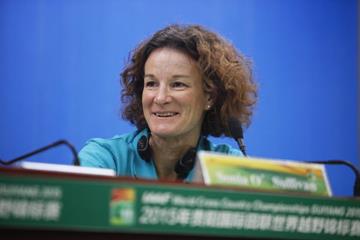 Seventeen years on from completing her historic long and short-course double at the 1998 IAAF World Cross Country Championships, Sonia O’Sullivan took to the stage as an IAAF ambassador at this year’s pre-event press conference in Guiyang, China, on Friday (27).

Having seen cross country at its peak growing up and experiencing it herself, O’Sullivan knows the event faces challenges as its popularity, including among athletes, seems to be on the wane.

“I think, for me, the World Cross Country Championships will always be special because when I was growing up it was something I watched on TV,” recalled O’Sullivan.

“We had people like Zola Budd, Ingrid Kristiansen, Grete Waitz. They were all role models for me, people I would want to emulate.

“I tried to run the World Cross several times and I was lucky in a way that I had a good team to compete with. As an Irish team we won the bronze medal twice, in 1997 (in the long course event) and 2002 (in the short course).”

Of her memorable solo double in the Moroccan city of Marrakech, the Irish runner remembers the importance it played for the rest of her career.

“In 1998, the World Cross Country became really important to me because in 1996 I didn’t do too well at the Olympics; in 1997 things didn’t work out too well either, so I had to go back to basics.

“It wasn’t important to win the race (in 1998), but it was important to go out and do my best. If anyone was going to beat me, they had to be better than me on the day and, as it turned out, they weren’t!”

But looking at O’Sullivan’s training diaries from the time, it becomes clear that her success did not come by chance.

“Even when I look at it now (her training plan for the month of March in 1998), I am surprised that you would actually train that much in that month, but then also would continue to train that hard because cross country wasn’t the end of the road because that would just lead in to the summer season.

“I think the biggest thing we have to do right now is to get into the minds of athletes to show cross country can lay the foundation for success later on in the year, that it is important and it has a big impact on the rest of the season.

“You get something out of it, it is a bit of a testing point for you and it is something you can’t get in training.

“We have to look at what we have now, and what we don’t have, and we don’t have a lot of European athletes competing, so we need to create ways to make it important for athletes.

“One way it could be done is if you look at World Cross Country Championships, we have individuals, you have countries but you could also have continents and make it important for athletes to compete for their continents within the same events.

“You would have only one athlete from each country on the continent, you can’t have the whole Kenyan team there representing Africa, or the whole American team representing Americas, and it would make it a little bit more interesting, because you would be part of a bigger team.

"It was only just this morning that I came up with the idea, so we probably need to develop it a bit more, but something like that,” she explained, an idea that got acknowledgement from the IAAF President Lamine Diack, who was listening with rapt attention in the first row of the audience.

O’Sullivan, an astute observer of championship events, believes that the IAAF World Cross Country Championships, Guiyang 2015 will have both an impact and a legacy.

“I went for a run this morning and down at the park (where the athletes are training) and the local people seem to be really interested.

“They’re all laughing and smiling and taking photos, so they are definitely aware that there’s an event going on in town and they are very curious about all the runners running around in their track suits.

“Hopefully many of them will come out to watch the races,” added the two-time world champion in the discipline. "The interest in the city seems pretty high, so hopefully it will attract a lot of spectators, because ultimately that’s what you need to make it exciting for everybody."

Later on Friday, O'Sullivan travelled to the venue for this year's championships, mingling with the teams at the official course inspection.

As a star attraction and idol to many, she was on hand to dispense advice and was an on-hand mentor to junior athletes from several nations.