The name Tianna Bartoletta at the top of the 2014 long jump list may seem an unfamiliar one to some track and field watchers, but the 28-year-old US athlete is no stranger to leading the world.

It was nine years ago, at the 2005 IAAF World Championships, when Bartoletta, then a fresh-faced 19-year-old known as Tianna Madison who had just finished her second year at University of Tennessee, caused one of the biggest surprises in Helsinki by claiming the world long jump crown with a leap of 6.89m

At the time it seemed she had the long jump world at her high-flying feet, an impression reinforced the following March when she finished second at the 2006 World Indoor Championships in Moscow, a medal which was belatedly upgraded to gold last year following the disqualification of Russia’s initial winner Tatyana Kotova

A string of global long jump medals seemed sure to follow for the young woman who’d won nine high school state titles after taking up athletics at school in Elyria, making her name as only the third Ohio school student after Susan Nash and a certain Jesse Owens to win four events at a single state championships.

However, that Helsinki gold-medal-winning mark remained her personal best until just last week when she leapt 6.93m in Marrakesh, followed on Wednesday night by her first ever seven-metre jump, and the first seven-metre jump of 2014 by anyone in the world, to win her first Diamond Race points of 2014 at the ExxonMobil Bislett Games in Oslo.

Bartoletta’s leap of 7.02m was the stand-out field event performance on a beautiful summer evening despite swirling winds playing havoc with many of the technical disciplines.

More importantly for Bartoletta, it was a huge relief to finally join the coveted seven-metre club after nine frustrating years of injury problems, hardship and an apparent failure to live up to her early potential.

After her surprise success in 2005, Madison, as she then was, turned professional and joined Bobby Kersee’s training group in Los Angeles only to suffer her first serious injury the following summer – a torn cartilage and chipped patella caused by an awkward landing when competing in the UK, a problem which eventually required surgery.

She made the World Championships long jump final again in 2007, but without time for a full recovery, she could only finish 10th.

Hard times followed as she struggled to regain her old form. She didn’t make the US team for either the 2008 Olympic Games in Beijing or the next two World Championships in Berlin and Daegu.

Out of shape and out of money, she needed to make a change.

After first moving to Florida, she switched coaches firstly to Rana Reider and then later joined Loren Seagrave’s group, beginning a new chapter in her career which two years ago at last brought more global honours, although this time in the sprints.

She won a bronze in the 60m at the 2012 IAAF World Indoor Championships in Istanbul, and capped a series of sub-11 times on the IAAF Diamond League circuit that summer with a personal best of 10.85 in the women’s 100m final at the London 2012 Olympics, although she was an agonising 0.04 out of the medals, crossing the line in fourth place.

Better was to come a few days later, however, when she led off the triumphant USA 4x100m relay quartet containing Allyson Felix, Bianca Knight and anchor Carmelita Jeter who blazed so memorably across the line in 40.82, one of the most spectacular and unexpected world records of recent years.

To celebrate, Bartoletta reportedly went to the local grocery shop near her rented flat in London and waved her gold medal at a cashier who had told her earlier, “If you don’t come back with the medal, I’m going to kill you.”

After missing much of the 2013 outdoor season, she was back on the podium again as a sprinter this March in Sopot when she picked up another 60m bronze, clocking 7.06, just 0.02 outside her best.

In between, she acquired a new surname, having married John Bartoletta – a 49-year-old investment manager she met in an Orlando restaurant – in December 2012, and found a new sport, joining the well-known hurdler Lolo Jones in trying out for the US bobsleigh team.

She and teammate Elana Meyers placed third in their first World Cup race but unlike Jones didn’t gain selection for this year’s Winter Olympic Games in Sochi.

While that may have been a disappointment, her marriage to John has been anything but as she credits her husband not only with suggesting the bobsleigh adventure but, more importantly, with reinvigorating her track and field career.

Indeed, she recalls that their very first conversation involved some hard, honest truths, as she explained to a Tampa Bay Times reporter recently: “[He said] ‘You haven’t stopped lying to yourself, you haven’t stopped cutting corners. You don’t even know how you good you are.’

“I believed what he was saying and believed him enough to believe in myself, and that was kind of the start of the whole new track and field journey. But it also was the foundation of our relationship, which is believe in each other.”

As if two sports and two demanding track and field disciplines weren’t enough, Bartoletta has also found time to set up Club 360, an organisation to help educate young women to build their lives around the principles of honour, integrity and self-respect. She is its president and role model.

She and her husband also launched a social media site, called Unation, although it hasn’t all been happy families for the Tampa-based Olympian who recently described herself to a local reporter as “estranged” from her parents following rumours that they were threatening to sue the Bartolettas over allegations of bullying and sex abuse.

Those traumas aside, she was back in a US running vest this May when she won another gold medal for her country at the IAAF World Relays in Nassau, again providing a perfect start for a US team to triumph over the Jamaicans.

At the IAAF Diamond League meeting in Rome last week, she posted a season’s best in the 100m of 11.13 and a few days later in Morocco, she finally transferred all that speed into a long, long-awaited long jump best and leapt to the top of the 2014 world lists, a position she enhanced with style in Oslo on Wednesday night.

Perhaps, after years of injury, frustration and family drama, the teenage long jump sensation from Helsinki 2005 has finally come of age.

BACK
Pages related to this articleAthletes
Tianna Bartoletta 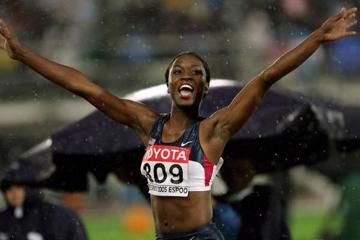 Madison boxes her way to gold...